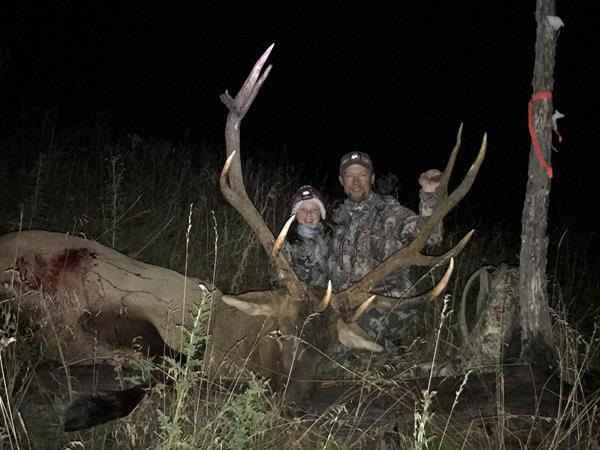 The past couple of years have been unusual with reduced elk numbers and associated rutting activity in the area I have religiously hunted for the past 14 seasons. The overall lack of sign and sightings towards the middle of August had me believing this year was going to be more of the same. A few weeks later, I was encouraged by a phone call from a friend who had recently talked to the regional biologist. He mentioned the recent mountain goat survey flights indicated the elk were all staging in familiar ground and this could be a great year.

Another big change year over year was my two daughters expressing an interest in hunting, but with their sports schedules, finding time to get out was challenging as more often than not my wife was going one way with one of the girls and I was heading the other way with the other for games spread throughout our home state of Montana. Fortunately for my youngest, Maddie, we found a little niche in the schedule and spent a few evenings during the week hiking around the mountains of southwest Montana for elk. We had multiple close encounters, with one of my fondest memories all time taking place the evening of September 13th. As we worked up through a series of meadows, we heard a faint bugle and set up in the taller timber near the edge of a large, open park. The elk appeared a few minutes later with several cows filtering out of the timber to the north of us and into the meadow where we were located. The bull eventually followed. He was a super aggressive 300” bull that tirelessly chased the cows, covering virtually every square inch of the meadow. A larger bull was intrigued with the activity and joined the group a short time later. I was a bit shocked when the smaller of the two bulls postured and ran him off. Interesting!

After a solid half hour of watching all the activity, we decided to make a play and close the gap. Everything was coming together with one of the cows breaking off and wandering within 20 yards of our location. The bull followed suit and stopped 42 yards broadside from us - a slam dunk shot. Maddie had her hand on my calf, and I could feel her grip getting tighter with every step the bull made. She did not say a word the entire time, but after a few minutes of the bull standing broadside within range, I could hear her whisper, "Shoot.” I could not help but chuckle under my breath. I certainly would have let an arrow fly, but unfortunately it was a bit too dark. She was a little fired up all the way back to the truck, telling me, " Dad, you totally could have killed that bull." Good stuff and a great opportunity to discuss what I hope will be a lifelong lesson for her in patience and taking ethical shots.

We spent a few more days in the field and had a couple other opportunities at elk that did not come together. Following an early morning soccer game, I asked if she wanted to head out for a hike, but this time around she was a little tired, so I ventured out by myself. Within a half hour of parking my truck, I heard a bugle off in the distance and I had a fairly good idea where he was headed. I took off down the ridge to try and cut them off, missing the window by a few seconds. The 330"+ bull and his dozen cows made it to the meadow just before me and subsequently got comfortable with the surroundings and bedded down. I had enough cover to get within 70 yards and sat on them for over an hour before I felt the slightest breeze hit the back of my neck. Within seconds, they blew out of there. Bummer!

I collected my thoughts, and shortly after, I worked my way back up the ridge to a glassing location that provided a broad look at the slides just inside the wilderness boundary. Within a few minutes, I was able to catch a glimpse of a blonde body moving through a sparsely-timbered hillside. The bull had a couple cows, and although he was quite a long way off, it did not take any imagination to paint the large set of antlers on his head. That was all I needed to see. An hour later, I was second guessing my route and whether or not I was on the right finger ridge when he let out a bugle a couple hundred yards from me. The wind was favorable, so I headed up the mountain after him.

I broke out into a small clearing and looked to my left and saw two spikes feeding, heading towards me. The bull saw them as well and beelined it to them, crossing in front of me at 55 yards. When he stepped behind a small Douglas fir tree, I drew in anticipation of the bull taking another step around the tree, providing me with a clear shot. That step never came to fruition, and I had to let down. I drew again when he decided to show himself, but he did not stop again until he reached the first spike. Wow! The bull hooked the spike, which eventually turned and ran directly in front of me at less than 40 yards with the larger bull directly behind. For the third time, I drew and cow called to stop him, but once again, no shot presented itself. The second spike was still in the mix and just out of sight, so I ran up the ridge once the larger bull disappeared from the skyline, following two of his cows. As I approached a rocky spine and started cresting over the ridge, I saw antler tips coming straight at me. It was him, and I think he was under the impression I was the second spike. I went down to one knee, simultaneously drawing my bow for the fourth time on the same bull. At eight yards, we stared at each other - me through my sights while he appeared to be looking right through me, searching for the spike. I had no clear shot at his vitals but was able to hold the draw long enough for the bull to eventually turn back towards his cows. I let down and took three steps to my right in the direction the bull was headed when suddenly he turned back, walking below me at 35 yards broadside. I stretched the string for the fifth time, and my arrow was on its way the moment he stopped. The illuminated nock indicated the shaft was buried to the fletching right behind the front shoulder, and within seconds, he piled up in plain sight and took his last breath.

I love sending the annual text message to my wife with a picture of a bull on the ground, requesting a few supplies and extra meat packers. With darkness approaching, the reinforcements arrived and we spent the next five hours packing elk meat off the mountain. At 11:30 that night, we managed to get the last load of meat back to the road. By far, this was the largest bodied elk I had ever harvested. He was an old bull with teeth worn to the gums, 12" bases, and 22" G2s. The 2017 results were a heavy horned bull with a pile of meat for us to enjoy for the next 12 months.

My experience pursuing elk this past archery season is one of my most memorable to date, but it pales in comparison to my oldest daughter, Josie, who recently passed the hunter safety program and subsequently harvested her first mule deer buck in October. I was fortunate to have the opportunity to record the hunt on my phone, and I have replayed the video hundreds of times since then with my favorite line of all time ringing out just after the shot, “I got him dad.” I can’t wait to hear those words again next fall.