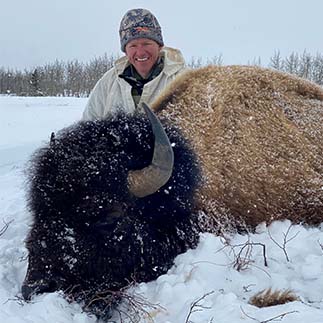 Drawing a Plains bison tag in Alaska is rare. Due to extreme conditions and access, the conversion rate to a harvest is even rarer, roughly 65%. I can now see why. Huntin’ Fool identified Rob Jones of R&R Hunting & Outdoor Adventures as the premier outfitter for a March 2021 hunt. After checking a couple of references who gave rave reviews and successfully drawing my tag, Jones and I were on the phone and in planning mode. This process included locking in dates, acquiring correct licenses and tags, Covid-19 testing to enter Alaska, and, of course, gearing up. When I drew the tag, I emailed fellow SCI Executive Committee member Mike Crawford who kindly offered one piece of advice on drawing a Farewell herd tag, “Be prepared for cold. Alaska cold.”

During my research on the conditions in the Farewell area, I learned about the need to have “Bunny boots” or ECVBBs originally made for the U.S. Armed Forces in the 1950s for jumping out of airplanes at 60,000 feet during the Korean War. The rubber soles kept the parachuters’ feet warm, whether wet or dry. My feet were warm the entire hunt.

Upon arrival in Anchorage, I headed to Peters Creek B&B in Chugiak. Unfortunately, a frozen outside door led to a less than glamorous evening of sleeping in Rob’s airport hangar. Luckily, the owners of Peters Creek Inn, Martha and Burl, got the frozen door open and let me spend the following day and evening there. They are simply amazing people. Martha’s barley soup and a tour of Burl’s custom airplane parts shop closed out my first evening.
Burl’s life story of losing his father in a plane crash and then creating from scratch a world-class FAA-certified airplane parts company specializing in float and snowplane parts was mesmerizing. All without a college education. What a legend. His wife, Martha, runs one of the best catering companies in the Anchorage area. She also let me in on a family secret to keep the moose from eating all her homegrown garden vegetables – putting dried wolf blood into the soil!

The following morning, I met Rob at his hangar, checked our paperwork and weight, got plenty of snowmobile gas cans into his Super Cub, and we were on our way to the hunting area, about 2.5 hours northwest of Birchwood, Alaska. The closest towns or villages were McGrath and Nikoli. With Mount McKinley/Denali looking over us, we made one stop on the flight to pick up some plywood to create a floor inside the tent in camp. Our stopping point was a fuel depot along the Iditarod dog sled race trail held annually in Alaska since 1973. I came to learn the race is held in early March with teams competing for time, going from Anchorage to Nome over an 8 to 11-day period using 14 dogs.

As we got closer to the tent camp, we began to pick out moose in the snow very clearly. We must have counted 20 moose while flying in. Then far to my right was something I had never seen in my six previous trips to Alaska. It was a massive animal that looked like a brown Volkswagen with horns. It was my first glimpse at Alaskan Plains bison. Though the Plains bison were originally introduced to Alaska in 1928, the Farewell herd bison were planted in 1967, supplemented in 1972, and now number about 300-360 animals. There is a fall and a spring season hunt for these animals, consisting of between 30 and 40 permits per year in total, depending on the aerial grid count by the Alaska Fish and Game Department.

As we began to circle the Farewell area, we started seeing bison all over the snowy plain. We saw groups of three to six and then groups of 10 or more. It was a gorgeous sight. We probably saw 50-60 by the time Rob put his Super Cub down on the snow and I met Jason Vogel, my guide for the week. Jason is originally from St. Peter, Minnesota and has been guiding in Alaska for 20 years. He’s guided approximately 40 Dall sheep and likely equal that number of moose and bear and a dozen or more bison.

The tent camp’s backdrop near Sheep Creek was the wondrous snowy Alaskan Range, St. John’s Hill, and the south fork of the Kuskokwim River. After sighting in my trusty 1953 Winchester Model 70 in .300 H&H with the steady and consistent LaSalla Arms 180 grain Barnes TSX bullets, we prepared for the unknown overnight temperature, which can range from 5 degrees to minus 50 degrees in March. A week before our trip, both Nikolai’s village and the town of McGrath had temperature readings in the minus 20 to minus 35 range, which modified my original packing to add base layers and a Swazi hard-shell suit. We got lucky at only minus 3 the first night.
Given that we knew there were bison in the area from our flight, had seen tracks throughout the valley, and the weather had been reasonable, I felt optimistic about our chances. My gear was one thick heavyweight base layer of Wool X, a secondary Wool X top, a Sitka heavyweight hoodie, a KUIU Superdown jacket and pants, and the final Swazi exterior shell layer (jacket and pants). I also borrowed a pair of snowshoes and hunting “whites” from Rob Jones.

Jason did a good job giving me a refresher course on driving a Ski-Doo 550 through quick tree turns and avoiding brush and deep snow, although I still got stuck twice. We put on our whites (exterior layer to blend with the snow) once we saw three good-sized bison grazing in a semi-open plain lined with cottonwood trees about two miles from camp. We hopped off the sleds, put on our snowshoes, grabbed the spotting scope, and headed up to the top of a hill to get a clear vantage point to see the bison in the valley. We were in luck. All three were bulls, and two were shooters for sure. They were around 550 yards from our hill but had a thick line of cottonwood trees blocking any conceivable shot.

With the wind a problem on a direct approach, we planned to take the sleds about half a mile southwest and then snowshoe back towards them, attempting to be quiet as we moved through the spruce and cottonwoods. It had also started snowing a bit. We got 380 yards from them and then they laid down. With the bison oblivious to our presence, we felt one more spruce tree in the middle of the field they were grazing on would get us to the desired 300-yard range. We made a break for it, and after confirming that we remained unnoticed, Jason aptly cut down a few branches on the spruce we were hiding behind. I set up to take a shot, marking 287 yards on my Leica rangefinding binoculars. Through my Zeiss Victory V8 scope, I could clearly see the two monstrous bison. They were much larger than we had realized from the hill. Adrenaline flowing, I was focused and prepared.

We waited about 25-30 minutes for the beasts to rise, but with the weather changing to thicker snow and it being later afternoon, we decided to change course and try to get them to stand up. Jason moved from the spruce to the open field. In an aggressive fashion, he began to wave his arms and howl, “Hey, bison!” three or four times before they slowly rose to watch us. I looked through the scope, let my surroundings fade, carefully focused on the front shoulder, and let a bullet fly. Boom! The big boy stumbled about 15 feet before collapsing. His two friends began ramming into him, jabbing him with their horns, and tearing tufts of bison fur with their hooked headpieces.

As we approached, unlike other animals I’ve hunted, the bison got bigger and bigger. He ended up going 18 5/8" and 18 13/16" on the horns. The bases of the horns were enormous. After four hours of caping him out, bagging all the meat and head, and doing the paperwork, we were completely exhausted and headed slowly back to camp, pulling everything behind the front sled. It was a thrill of a hunt and one that I’ll certainly never forget. Thanks, Huntin’ Fool, Rob Jones, and Jason Vogel!