Finishing What I Started 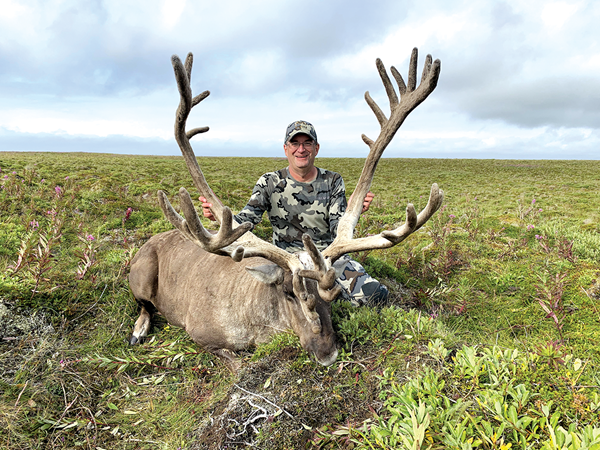 Last year, I spent six days on the Alaskan Peninsula in search of big caribou. We endured some tough weather conditions and saw a number of animals, but just not the quality that the Peninsula caribou herd is known for. After six days of hunting and only being one of a couple of hunters who did not tag out, Rod Schuh of R&R Alaska Peninsula Guide Service made me a deal to come back and finish what I started.

I flew into Nelson Lagoon in mid-August where Rod picked us up and took us to his main lodge. He mainly caters to fly fishermen this time of year, but he also takes on a couple of caribou hunters each week as well. His setup is perfect; he has multiple planes to get you into the field via lake or tundra, so there are no limitations on where you might be dropped off. My guide from the year before, Wes, and I were dropped off at a lake where a herd of bull caribou had been seen within the past week. Early in the season, the caribou do not move around much, so we were hopeful to turn them up within a few days.

Sunday night, we set up camp, caught up on life and how the season had been going, and got a good night’s rest. We woke up to gray skies, heavy mist, and fog. Our hike up to the top of a ridge was quick where we waited for the fog to lift before heading to our glassing spot. By 10:00 a.m., we were glassing for caribou in strong winds and heavy mist. Wes covered one area and I covered the other, and for the first few hours, no caribou were seen. Wes thought he had seen a caribou on my side and came over with the spotter, but he couldn’t find anything. He went back to his side of the knob, and I poked my head up from the depression I was in to stay out of the wind and saw a caribou way off in the distance. I got Wes back over and he quickly found it in the spotter.

As I was watching, the one caribou turned into six. I was counting them out as they appeared over a ridge, and Wes asked, “What the heck are you looking at?” Apparently, the caribou Wes was looking at was a lot closer to us and I had spotted the six bulls that had been seen earlier in the week approximately three miles away. The one closest to us wasn’t a shooter, so we were off.

During our four-hour trek across the tundra, the caribou had bedded. We got glass on them and determined there were three shooters in the group. By the time we got to where we had last seen them, they were up and feeding away, which was not good. As anyone knows, you rarely catch a caribou moving away from you. However, we both thought we could cut them off with the way they were heading, and as soon as the last one went over a ridge, we were off.

We arrived at the ridge where they had disappeared and peered over. Low and behold, they had bedded down again and we were able to belly crawl to within 250 yards. We studied them over closely and picked out the largest one. I had a great rest on my tripod and waited for them to stand. They, however, had other thoughts. The big one went to sleep and was out like a light. Daylight was burning, and it was getting late. I wanted them to stand on their own, but we decided to try to make something happen.

Wes stood up and got their attention. This got all but the big one to stand up. They moved to the right of the still-bedded bull where they bunched up together. Wes started to yell at them, but the big one was not moving from his bed. At this point, I told Wes, “I’m taking him in his bed.” I was afraid that if he stood, he would quickly bunch up with the others before I could take a shot. My rifle was sighted in at 250 yards, and with a single shot, the bull stood up and went right back down. My new 7MM Allen Mag put the big bull down for the count. As we walked up, he grew in size and the sun started to come out. He was everything I was looking for, and I couldn’t believe we were able to seal the deal with as long of a stalk as we had made. Fortunately, the mist stopped when we started this journey and now it was sunny for pictures.

It took us several hours to get the bull cleaned up and packed down to a lake that was a third of a mile away. The meat, cape, and horns were packed down and would be picked up by Rod in the morning. It was now 9:00 p.m., and we headed for the barn. By 10:00 p.m., the headlamps came out and we received a scare when we came across a bedded caribou in the dark. All we saw were his glowing eyes at first, and we thought it was a bear. That’ll get your adrenaline going.

By 1:00 a.m., we were back at camp, but we had run out of water seven hours earlier. The leg cramping had started and the shakes made it hard to hold the water bottle, but we ate and then crashed around 2:00 a.m. By 9:00 a.m. the next morning, we were back at camp to enjoy all the amenities it had to offer. It was an amazing hunt that couldn’t have gone any better.