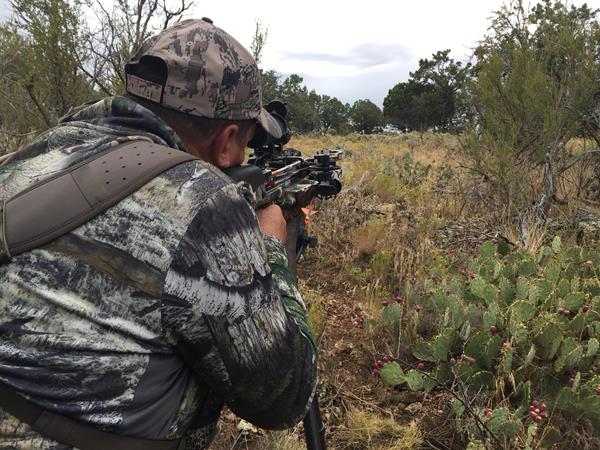 On August 15, 2019, Eddy Corona from Outdoor Experience 4 All and Wounded Warrior Outdoors called me and said he had a donated archery bull elk tag in unit 10 Arizona if I was interested. I replied, “Yeah I’m interested!” My buddy, Paul Baird, contacted his friends from A3 Trophy Hunts LLC to find out the conditions in the area. A3 told him that this area had a phenomenal wet spring and the antler growth should be epic. Paul went ahead and booked with A3 and put together a seven-day guided hunt on the Boquillas Ranch, aka Big Bo!

Let me back up a moment and explain why Mr. Corona contacted me in the first place. I am a retired Army Combat Arms Officer of 27 years. I sustained a couple of injuries on a deployment in Afghanistan in 2005-2006. Now with a few physical limitations, I qualify for a Challenged Hunter Access/Mobility Permit (CHAMP) in Arizona. Mr. Corona squared me away with a donated bull tag that an out-of-state hunter would wait 15-20 years to draw. Paul Baird coordinated for me to have a professional guide with A3 Trophy Hunts, and this quickly became a once-in-a-lifetime hunt.

Paul and I met up with George Garcia from A3 and began at 0400 on September 20th. Within minutes, George was talking back and forth with a couple of bulls. Suddenly, there was a deep bugle from a mature bull. I was chomping at the bit to go after him, but the wind was blowing inconsistently through the canyon. After a while, the bugles stopped and George whispered, “Let’s go get that bull!” We were able to creep within 50 yards or so of this bull which had bedded down. With a deep growl, the bull let us know we were not welcome. George set me up in the path the bull would approach, set Paul up with a camera, and then retreated about 20 yards to simulate another bull thrashing about. My adrenalin was pumping, and after a few moments of silence, nothing happened. This old, wise bull must have winded us, heard us, or simply sensed something was wrong and slipped away quietly.

That afternoon, we set up in a canyon trail headed to a dirt tank. Just before dark, a mature bull bugled on top of the mountain above and behind us. We could hear him pushing his cows down the steep hill, and George got a quick glance of this 360"+ 6x6 bull. We were in a great position with natural concealment and downwind. As they were making their way down to us, we heard another hunter mutter a quirky cow call by the water, stopping the lead cow dead in her tracks. In my disbelief, the hunter called again and the lead cow took off like a locomotive straight up and over the mountain, taking the bull with her. Had this other hunter not made a sound, these elk would have walked straight towards his blind. Shortly after, another mature bull bugled just up the hill in front of us, announcing his dominant presence to the world. I got excited as this big dude tip-toed down the hill in front of us. We were worried that the other hunter was going to blow it again. He was coming down straight to us, and suddenly, he stopped at a tree just out of sight and began beating his antlers back and forth. He let out a low growl and continued ripping this tree apart. My heart was pounding with anticipation as I was ready for him to step out. Instead, the bull stayed out of sight until it was completely dark.

The next five days, there was enormous pressure from other hunters and the bulls stopped talking. It was difficult to find an area without other hunters or spotters on the mountain. Despite this pressure, George called in several average 6x6 bulls as well as a couple of other hunters. I wanted to take a shot at one of these bulls, but George held me back in search of a mature bull.

It was day six, and we had not found a mature bull. George showed me a video of a bull with long beams he had spotted a few weeks earlier. It had rained earlier in the week and there were no fresh tire tracks, so that evening, we went to see if we could find him. George was able to get three different bulls in the distant hills to bugle for a while, but they never exposed themselves.

Now it was day seven, the last day of archery season, and we headed up the same mountain. Just before sunrise, two bulls began bugling across the canyon. George set up his massive spotting scope and it wasn’t long before he spotted a younger 5x5, a couple of cows, and the long beam bull. “That’s him,” George said, “Come take a look.” I couldn’t see the bull, but I did manage to see the massive antlers through the trees. The wind was at our backs, pushing our scent across the canyon. There was nothing we could do but wait for the elk to top out and move to the backside of the mountain.

Once they moved out of sight, we began our slow, quiet movement down the mountain and across the canyon. We made our way up the other mountain only to find they had both moved on to another mountain range. Again, the wind was at our backs, so we quickly topped and maneuvered down the backside. Now the wind was circling through the canyon, and the updraft certainly carried our scent to the bulls far above us. This was it, the last stalk on the last day and the wind was not cooperating at all. We decided to adjust our approach even further away from the two bulls so they wouldn’t hear or smell us.

We came to a steep, ridge dense with trees, brush, and patches of dry cactus, making it almost impossible to climb up the mountain quietly. After two hours of stalking this bull, we finally reached the plateau. George whispered, “It’s been a while since we heard a bugle, and we need to find that bull!”

While catching my breath, I ranged a couple of trees in front of us when George let out a quick bugle. The big bull immediately screamed at us just beyond the tree I had ranged. I could hear him headed straight for us, and I took aim. As the bull rounded the trees, I launched the arrow center mass right behind his shoulder. I lost sight of the lighted nock as he turned and disappeared. I looked back at George, and he quietly said, “You nailed him, and I got it on video!”

I could hardly breathe and was ecstatic to finally have an opportunity to sling an arrow at a mature bull. The shot was 50 yards with the bull quickly approaching at an angle, and there was little room for error. A precise shot right behind the shoulder would do the job, and anything else was sure to hit his shoulder, gut, or hip. George reviewed the recording from the camera but couldn’t confirm the placement. After half an hour, we quietly searched for the arrow around the point of impact with no luck. We decided to give it some time and went back to camp to view the video on his computer. Once at camp, we watched in slow motion as the lighted nock disappeared into the bull, center mass, right behind the shoulder. George looked up with a smile and said “Dead elk, let’s go get him!”
We went back and found the bull curled up about 40 yards from the shot. The arrow traveled diagonally through his massive chest and was sticking out the other side. “A perfect shot. That bull just laid down right here and it was over,” George said.

This was my first archery elk hunt at 51 years old. What an exciting, physically challenging, and extremely rewarding hunt! I was able to harvest a trophy bull thanks to George Garcia (Team Smackdown). It was awesome to watch him call in bulls. Thank you, Eddy Corona, for donating this bull elk tag, and to my buddy of over 30 years, Paul Baird, thank you, brother! None of this would have been possible without you. I am truly blessed with this amazing experience and look forward to many more adventures together.