How I Got My First Deer 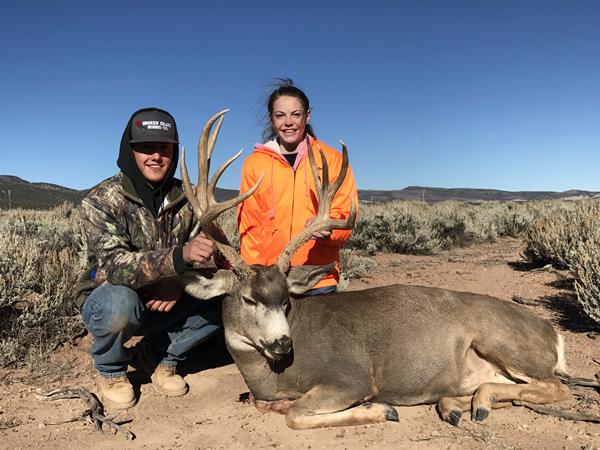 Deer hunting has always been a family tradition. The adventure typically starts a few weeks before the hunt as we scour the hills, scouting for bucks, and take the guns out to the range to make sure they are dialed in. We scouted a familiar family hunting spot that had produced some good bucks in the past and found some potential shooters for opening morning. Adam Pace, a family friend and big buck hunter, took me out the day before the hunt to make sure my gun was ready to go.

Opening morning of the deer hunt, Adam picked me up from camp before sunrise so we could get set up in the spot he had picked out for us to intercept bucks making their way to their beds for the day. As we looked through the binoculars, Adam found some deer and set up his spotting scope. He said there was a 2-point in the group, but I told him I wanted a 3-point or higher because my older brother, Colton, had bet me I wouldn’t shoot anything bigger than a 2-point. As we continued glassing, we spotted a couple more deer, but I elected to pass them up as well. Then, we saw a 4-point. Immediately, we scrambled to get my gun set up for the shot, but as soon as I could see him perfectly through my scope, he ran off.

As the morning progressed, it started to get way too cold, so we decided to jump in the truck and check a few other areas while we warmed up. While driving to another location, we spotted a deer bedded under a tree. We pulled out Adam’s spotting scope and scoped it out. Adam was amazed at how big the deer was. He looked at me and said he was going to get me this deer.

Adam looked through the scope again just to double check what he was seeing and said, “Holy crap, this is a giant!”

I got excited and asked if I could look through his scope. I looked through it, but I had a hard time seeing the deer. Meanwhile, my cousins, Kenneth and Kacey, had spotted the same buck and called Adam to see if he had seen it as well. We hurried up to where they were set up to see if we could get a better look at the buck. Once we met up with them, we came up with a plan. As Kenneth and Kasey snuck down to where the buck was, Adam and I took the truck and drove down by a big field in case the buck escaped. Once they got within about 30 yards, the buck got out of his bed and Kenneth shot and missed, scaring the buck into the field. The deer then jumped the fence to where Adam and I were set up, and Adam told me to get my gun ready, so I did. Adam was whispering not to shoot as the buck was moving. All the while, I was trying to find the deer in my scope. I finally saw it, and Adam said, “Shoot!” I shot the buck in the neck and dropped it dead. I was so excited as I slung the gun over my shoulder and ran to the buck. I was so happy I almost cried.

I called my family as they were still at deer camp getting breakfast ready, and I said, “I got one.”

They all climbed in the buggie and came right over to me. My brother was the first to jump out of the buggie and run to me with a grin from ear to ear. He hugged me and told me he was so proud of me. My grandma jumped out and started crying as she made her way over to me. She made me cry, and same with my mom. My dad just looked at the buck and said, “This is going to be heavy to get into the truck.”

I would like to thank my parents, Dirk and Carylie Lamoreaux, and Clayton Stallions for giving me the opportunities to learn about hunting. Thanks to my grandparents, Dean and Kathy Lamoreaux, and Trudy Hart for encouraging me to be in the outdoors and camping. And, of course, thanks to Adam Pace for being the best guide a girl could have.