Luck in the San Juan Mountains 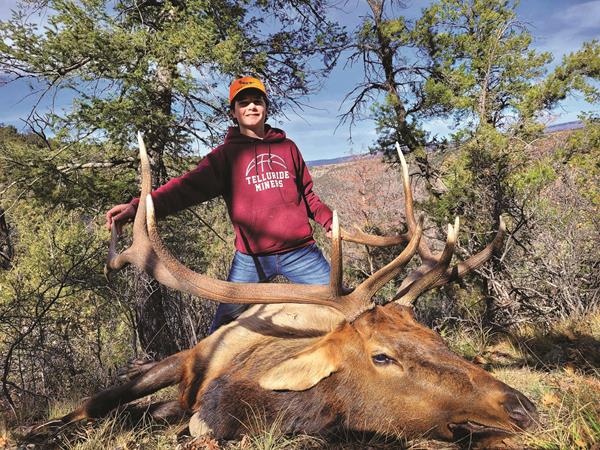 When I turned 15 years old in October, fall was starting to come into the picture. That was when the thought came into my head – third season elk hunting. I started talking to my dad, Mike Hulst, and my brother, Phillip Hulst (or PJ), about what our game plan was going to be for this upcoming season. We started looking at dates for the third season and noticed it was a very short season. Knowing we only had one weekend to hunt and maybe a day off from school during the week, we all knew we needed to scout and hit it hard that weekend. About a week prior to hunting season, my brother and I loaded up our dirt bikes to see what kind of sign and action there was in the high country. Although there was plenty of sign in the first snow of the year, my dad had hunted an area in the lower country where he had punched plenty of tags in the past.

The day before the season, my uncle, Matt, drove in from Denver and my dad’s friend, Matt Mnich (who we call Tall Matt), came into town from Ohio. That Friday night, we had everything ready to go to hit the weekend hard. We got to our spot Saturday morning at around 6 a.m. and came up with a plan on who was going where and who was pushing or sitting. The morning hunt started with my dad and me watching a bench from an advantage point near the top of a hillside. Sometime around noon, we headed back to the truck, ate lunch, and came up with a new game plan. We decided to move to another area. Tall Matt and I were going to sit on a small sage flat so we could watch and possibly catch some bulls traveling down the ridge. PJ, Dad, and Uncle Matt pushed the ridge from the east to the west towards us. That afternoon, we only saw four cows but no bulls. Losing hope down low, we decided to head to the mountains and walk some of the old logging roads. After a small walk and seeing no sign, we got the truck stuck in a good 10 inches of snow.

By the time we got out, it was dark and we had to head home. Although we had no luck in the high country that Saturday, we saw more elk in the low country than years prior.

During dinner on Saturday, I suggested going back to the spot where Tall Matt and I had sat that afternoon and Dad agreed. That next morning, Dad and I went back and were assigned to sit at the rock where I sat last time with Tall Matt. On our way to the rock, everyone broke off to push from all directions to meet up in the middle where we were sitting. Although we couldn’t find the exact rock again, we picked out a smaller rock where we could see the same hillside. We sat down and got into position. While we were sitting, we could hear elk coming out of the canyon. Although we could not see the elk coming out of the very, very steep canyon, we had to let the others know about this action. After a good hour of sitting, I was freezing. Where I was sitting, there was no sun, but on the other side, there was sun on a nice, comfy looking rock. I asked Dad if we could move to that other rock. He agreed and said we could see more over there. We got to the other rock, got comfy, and watched the small bench and the surrounding hillside. At this point, both Uncle Matt and Tall Matt were still pushing from the west to the east towards us. That morning, the pushers were seeing bulls everywhere, but they were too far away to get a shot. My brother, PJ, spotted a bull while sitting and decided to pursue it, while pushing it in our direction.

Not too long after, we heard a bunch of ruckus coming from the ridge above the bench. We were waiting for whatever it was, cow or bull, to come out. Seconds later, three bulls came running through the trees on top of the ridge into sight. The first thought that came into my head was, “Holy crap!” The first two dropped down into the very steep and dense drainage while the other bull decided to break off from the other two and followed the bench towards us. I was freaking out. He was still running, so Dad whistled and he stopped dead in his tracks behind a cedar tree. Thankfully, he started to trot again, so Dad whistled and he stopped once again broadside. I took my first shot with my Kimber 6.5 Creedmoor. I missed on my first shot, but my second was a solid hit. My dad also followed up with a shot. I think he just likes to shoot elk. Once again, the elk presented himself in an open spot where I sent another slug into him and so did Dad. Then, the elk dropped. Assuming he was done, we got up and started giving hugs and high fives, but when we turned to look at him, he was standing back up. Oh crap! Completely losing our minds, we grabbed our rifles and got set up for the second time. Dad informed me we did not want this bull to drop off into the very dense and steep canyon. We could not get another shot because he was standing facing away, not broadside.

He stood there for a good 15 minutes, coughing and definitely not feeling well. The second he took a step broadside, Dad and I both shot again, and he fell behind a patch of oak brush where he was not visible. Not knowing he was dead, we were moving back and forth trying to get to a spot where we could see him, but we still could not spot him. After waiting 20 minutes, I was sent to make sure he was done while Dad watched from the rock. On the way to the bull, I met up with my brother and thanked him for pushing. As I approached the area where we last saw the bull go down, I was in disbelief! I had just harvested my first bull, a 7x6. I ran up the hill into an opening and threw my hands in the air letting my dad know the bull was dead. Not long after, the whole hunting party met up and celebrated the moment with handshakes and photos. Now the work began. Hauling out the harvested meat wasn’t the hardest part. Bringing the antlers out in the thick brush and trees was the worst. Although I did get to practice my dance moves around the trees, it seemed like a lighter load.

I never thought I would shoot such a big bull for my first one. I owe it all to my dad for taking me out so I could have this chance and to my brother for pushing the bulls. Without a great group of hunting friends and family, this would have never happened.