Getting Lucky in The Bluegrass State 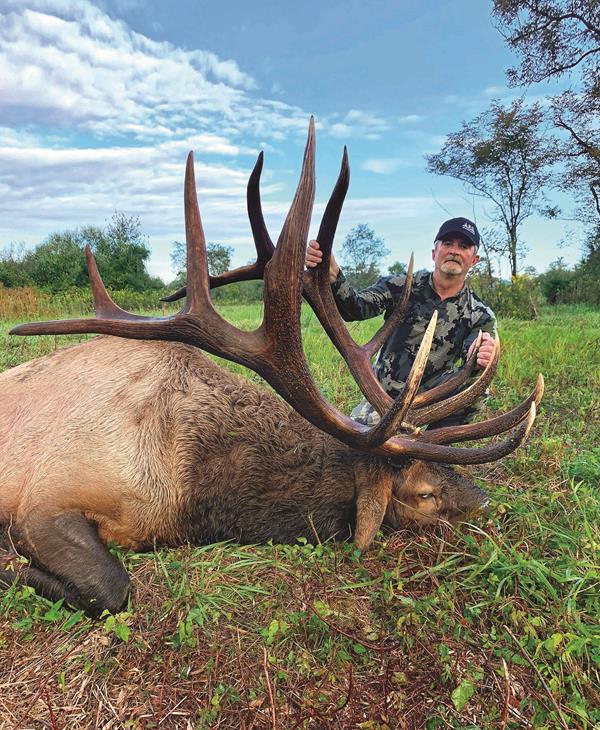 With 2022 being the 25th anniversary of the Kentucky rehabilitation program, it is only fitting to express how the amazing work of so many sportsmen, Kentucky Fish and Wildlife, and Rocky Mountain Elk Foundation has not only brought elk back to the Bluegrass State, but they have managed it in such a way that the opportunity to harvest a trophy bull is not matched by any other state. The 2021 season and the legacy of a bull elk named “Lucky” was no different, but this story would start seven years prior to the 2021 season in elk camp.

Sitting at camp around a fire with a few of his fellow guides, Lost Mountain Outfitters owner and guide Hurley Combs was discussing ways to better their hunters’ success of taking a trophy bull. During this discussion, Hurley started thinking of a unit where Kentucky Fish and Wildlife decided to do an in-state restoration project just four years prior. This restoration project consisted of taking mature elk from other counties in Kentucky and relocating them to a particular unit where the elk hadn’t been established yet. The key to this restoration plan was that sportsmen were not able to hunt this unit for 10 years following the release. That meant that hunters drawing in the 2019 season would have the opportunity to harvest bulls at their peak potential, and Hurley knew he would need to do the homework in order to make this happen.

With the start of the 2019 season, Hurley was busy with other units he had properties in and was not able to focus on the new unit. However, he and his team had an amazing season and were able to harvest several amazing bulls, but the thought of what the new unit held never slipped their minds.

Following the 2019 season, Hurley made it his priority to find a promising piece of property in the new unit. After several months of searching and just a few weeks before season opener, he found an amazing 3,000-acre piece of property that bordered 14,000 acres of non-huntable ground. This meant the elk would have a huge sanctuary they could go to and not be pressured. For the next few weeks, Hurley and his team focused on running trail cameras and scouting this new property for any signs of a good bull. In typical LMO fashion, it didn’t take long for the team to find several good bulls, including one giant bull they named “Casper.” He received his name due to his ability to show up out of nowhere and then disappear.

After weeks of scouting and countless preseason encounters with Casper, Hurley was preparing for his first hunter, Rick Pflanz, to arrive. The sun rose on opening morning with everyone excited for the opportunity at Casper. With the bull patterned, Hurley and Rick set up on top of a hillside and waited. After a short time, the bull stepped out at 37 yards and Hurley signaled for Rick to draw his bow. Just as he was about to shoot, Hurley realized the shot was not the angle they needed for a promising hit, so he called off the shot. After letting down, the bull worked away from them and the team decided to go back down the hill to get lunch in hopes of catching up with the bull that afternoon. As they got to the bottom of the hill, Hurley let out a few bugles and they instantly had a response. Looking out into an open field, they saw a bull headed their way. Rick informed Hurley that if he could get that bull close enough, he would shoot him. As fate would have it, that bull came within bow range and Rick made a perfect shot on the bull that is the standing state record bow kill in Kentucky. With a record bull down on opening day and Casper still on the hill, Hurley called the next hunter, Mitchell Brinsky out of Pennsylvania, and told him he better get down there because they had a giant bull to go after.

Sunday morning was slow and continued that pattern throughout the day. Though they heard and saw many bulls, none were the caliber of Casper. Monday morning rolled around and Hurley was able to locate Casper, but the team was not able to close the distance. As they were walking out, Hurley bugled and the herd bull responded while lying in his midday bed. Hurley decided it was best to back out and come back that afternoon to see if they could get on Casper or the herd bull.

After returning from lunch, Hurley took the young hunter to a watering hole the cows frequented during the late afternoon. Shortly after some soft calling, Hurley noticed the cows were coming right at them. Sure enough, the cows saw the team and blew out, taking the herd bull with them. Hurley quickly reacted, grabbing the boy and his dad, and took them around the mountain to get set up. As the bulls settled down, Hurley started to call and got the herd bull fired up. While returning to the cows, the herd bull walked right past Mitchell, giving him a perfect 40-yard shot. Mitchell connected with a fatal blow to the vitals, and the team watched as the great bull fell over after only running 100 yards. Though this bull matched the size of Casper, he grossed 386" and had 64" main beams. With two bulls in two days grossing over 380" a piece, it was crazy to think that the biggest bull on the hill was still up there.

Hurley made his third call to the third hunter, Corbin Ladner, who was in the Yukon on a moose hunt. Once he received Hurley’s phone call, Corbin jumped on a plane and was in camp Tuesday evening. As the guys were sitting in camp, they couldn’t help but think of the great bull that had cheated death with two different hunters. This is when Hurley changed his name from “Casper” to “Lucky.” Just like the previous hunts, Hurley and Corbin got on Lucky first thing Wednesday morning after spotting him 90 yards away. While Lucky and another bull were fighting behind a thick patch of brush, Hurley and Corbin rushed to get into a good position so that Corbin would have a good shot when Lucky stepped out.

In true Lucky fashion, the bulls switched up while behind the brush. Corbin drew and waited for Lucky to step out. As soon as Corbin saw antlers coming through the brush, he focused on the vitals and released his arrow, making a perfect shot. Excited to have an arrow in Lucky, Hurley and Corbin were in disbelief when they walked up on the bull and it wasn’t Lucky. Corbin had shot a beautiful 358" bull, but it didn’t measure up to Lucky.

After three hunters and three “Lucky” breaks, Hurley decided he was going to roll the dice and let this bull live another year. With more hunters coming into camp, Hurley received permission from the landowner and removed Lucky from the target list. With the closing of the 2020 season, Hurley had one mission and that was to keep Lucky on the 3,000 acres as much as possible.

Opening day of the 2021 season came, and Hurley found himself on a hill looking and listening for Lucky. Out of nowhere, Lucky screamed 30 yards in front of Hurley. He watched as the bull worked off with his cows. Hurrying down the hill, he began making phone calls to his hunter, Todd Ayers, but was getting nothing due to the lack of reception in the Yukon where Todd was moose hunting. After several failed calls and two days in a row of seeing Lucky, Hurley left Todd a voicemail saying, “Get to Kentucky! I have Lucky located!”

As Todd returned to the airport in Anchorage, he began to see all the missed calls from Hurley and listened to his voicemail. Full of excitement, Todd flew directly home and then jumped back on a plan headed to Kentucky. Arriving at camp Tuesday evening, Hurley and Todd prepared for the Wednesday morning hunt. With the rays of the sun, the hill came alive with screaming bulls, but after several hours, Lucky was nowhere to be found. A little concerned, Hurley and Todd went into town to grab some lunch. When they returned for the afternoon hunt, they located Lucky within 70 yards. However, Todd was really hoping for a closer shot and decided to back out until the following morning.

On Thursday morning, Hurley and Todd headed up the mountain in search of Lucky. The first bull screaming on the hill that morning was none other than Lucky, and he was working towards the field that Hurley had recently bushhogged leading up to season. The two rushed to get into position, and Lucky stepped out at 65 yards. Not wanting to pass up a second opportunity on this world- class bull, Todd steadied his Ravin crossbow and squeezed off a shot. The arrow fell perfectly into the vitals. Full of excitement and wanting to cherish the moment, Hurley and Todd backed out and gave the bull some time to expire. They made multiple phone calls to let their loved ones know that Lucky was down, and then they went to put their hands on possibly the biggest bull they would ever hold. “The size of the bull as we were walking up to him was unreal. The amount of mass and tine length were so impressive,” said Hurley. After the pictures were taken and Lucky was cleaned up, it was time to sit back and relax knowing the legendary Lucky would no longer be running the hill.

After the 60-day dry time, this world-class bull had a gross score of 401 3/8" and a net score of 392 3/8" typical. With these numbers recorded, Lucky became the biggest bull ever killed in Kentucky, both typical and non-typical. The size of this bull proves that the efforts being made by the Kentucky Fish and Wildlife, the Rocky Mountain Elk Foundation, and the local sportsmen are truly remarkable. Lucky is one Bluegrass elk that will forever go down in history.