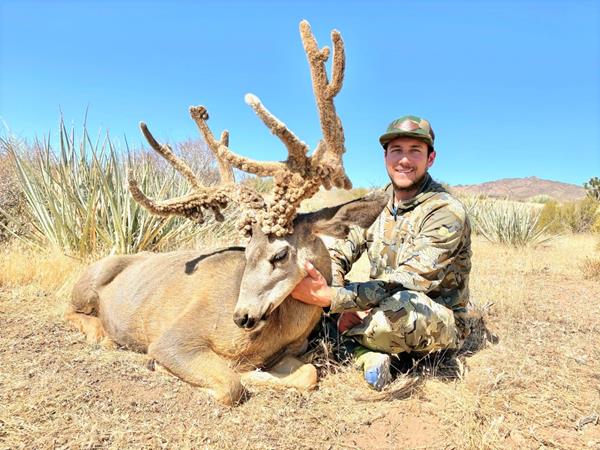 Every year, I put together a strategy for the western states I want to hunt according to how many preference points I have built up per state. Nevada is my home state, and every year I apply, it’s like waiting for Christmas Day until the results come out.

June came around, and as luck would have it, I drew a muzzleloader deer tag in a great unit! I was ecstatic. I quickly called my buddy, Taylor, who guides in Nevada to see what he thought about the tag and to see if we should team up to kill a giant. Taylor lives near the unit and spends more time in it than anybody. I’d also hunted the unit multiple times and had a history of a lot of bucks that were still alive. We compared some of the bucks we thought could be on the hitlist to hunt come September. July came, and Taylor was finding a lot of giant bucks. It was just a matter of what buck to concentrate on to hunt.

As September came around, Aaron and I found ourselves hunting one buck in particular for the first two days of the season. As it turned out, we couldn’t dig the buck up at all. Multiple people were hunting him, and we decided on day three to go to a different spot to try and locate another buck we knew of.

On day three, Aaron and I made it to one of our favorite glassing knobs in that area. Slowly, the sun was starting to come up, and within five minutes, I found four bucks over two miles away. I quickly got Aaron’s attention and said, “I think I just found King Kong.” King Kong was a buck we had history of for the last three years. Sure enough, it was King Kong feeding in the distance with three other bucks. We quickly made a game plan. I left Aaron on the knob and decided to jump in the truck to cut some distance. As I got to where I needed to be, I jumped out of the truck to put the stalk on. I closed the distance within 300 yards and had one little joshua tree to hide behind that was between the bucks and me. I patiently waited behind the tree for over three hours until the bucks were in a position to stalk. In the meantime, Aaron was able to get ahold of my dad, Tyson, and Bruce who were all able to make it to where Aaron was to watch everything happen in the distance.

Finally, King Kong was feeding the opposite direction. There was a small hill that I had to crest in order to shoot from. I quickly ranged him at 115 yards, got my muzzleloader in position, and gently squeezed the trigger. Boom! King Kong fell over dead. I was in shock at how everything lined up so perfectly and that the hunt was over. I made it over to King Kong to realize he was something very special that I had always dreamed of. He was 34" wide, supporting a 25 2/8" inside spread. He had 44 3/8" of mass, with 18 scoreable points per side. I knew he was going to be record book material! Aaron, Tyson, Bruce, and my dad all made it over to where I was for pictures and to help out.

After patiently waiting during the drying period, I had King Kong officially SCI scored. He was a whopping 229 3/8". With a velvet reduction, he came to 224 6/8", which made King Kong the new #6 in the world for a Rocky Mountain mule deer free- range buck ever killed with a muzzleloader. That also made him the new #1 mule deer in Nevada killed with a muzzleloader that’s been entered in the SCI record book. Dreams do come true. Mule deer are life.