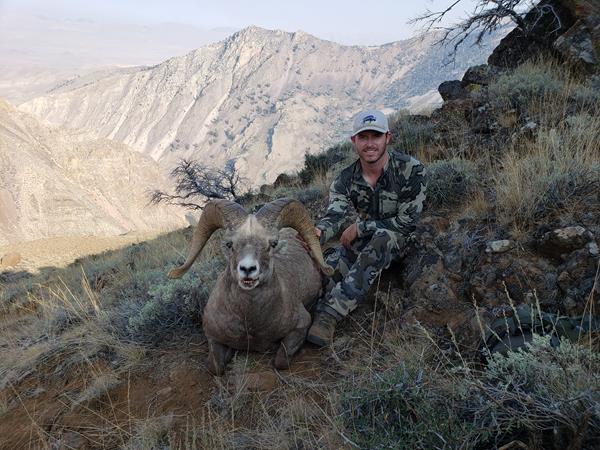 I was working at home, per my state’s COVID-19 stay-at-home order, when I received the news I was successful. The year 2020 had already been a year to remember and it was not even halfway over yet! I probably stared at my email for an hour, reading it several times over. My excitement was high, but I also felt a bit overwhelmed with the task of filling a once-in-a- lifetime opportunity. For me to do this hunt self-guided, I knew I was going to have to give it everything I had, both in the field and off. I had no previous sheep hunting experience and knew I was going to learn a lot in the coming months.

I spent a few months researching, conditioning, and e-scouting. Then, it was time to put some boots on the ground and start filling my optics with some rams during scouting season. I invested in the “do the hunt before the hunt” strategy, but still, I had no idea how difficult the task of finding rams was truly going to be. Through five scouting trips, I had only glassed rams on one of those trips. Even though my scouts did not turn up a lot of rams, I knew they were still productive. I put trust in my research conversations with key individuals who reminded me that just because I did not turn up rams in this timbered unit did not mean they were not there.

The day before the season opened, my hunting buddies, Daniel and Donnie, and I backpacked into the ridge where I had seen the most rams in my preseason scouting. On the evening of day one, we spotted a band of 10 rams moving out of timber and into a treeless avalanche shoot. Two of the rams were mature and worth tagging. Unfortunately, they were a couple of miles away and there was not enough legal light in the day to get into a shootable position. We glassed them until dark and put them to bed.

The next morning, we glassed the rams up no further than 200 yards from where we left them the night before. We planned to traverse the face of the mountain and get to a shootable distance. A cold front was blowing in, and it was starting to snow at our elevation of 10,000'. We moved on with the plan through the snow and low visibility to where we thought the rams should be, but nothing was there! We took refuge from the wind and snow in a small island of trees on this rocky face of the mountain and tried to wait out the weather all day. The band of rams never emerged.

A few days passed by and we spent countless hours behind our glass trying to find those rams again. I finally found them late one evening where I last saw them in a rocky avalanche chute. I watched them until I could not discern sheep from rocks and went back to camp to relay the news. The excitement of another pursuit jolted us with the motivation we desperately needed after not turning up rams for days.

At first light, the face of the mountain was devoid of life. After an hour of waiting, I heard a “clank” in the distance. I motioned to Donnie and asked if he heard it as well. Within five minutes, all 10 rams presented themselves from the sparse trees, including the two mature rams I had been after. I connected the dots that the “clank” was likely the two mature rams butting heads in the distance. I ranged them at just over 1,000 yards, but they were working their way closer to us. Just as they were getting to a more comfortable shooting distance, they became obscured by the terrain. The rams stayed hidden for an hour before they became visible again. Now they were feeding and working their way back into the sparse trees and away from me. If they made it to the trees, I would not have a play on them. I set up for a shot with my long-range rifle. I aimed at the largest ram and squeezed the trigger. Miss! The shot went over his back and drifted left from the wind on the other side of the drainage. All the rams scrambled and huddled together under a tree. I found them again in my riflescope, got stable, adjusted for wind and distance, and fired another shot. Miss! Over his back again. The rams all formed a single file line and trotted off into the timber.

I sat there in disbelief. Was this going to be my sheep hunt story? Was this the opportunity of harvesting a mature ram? Knowing that the rams had left the country, we left for camp. The rest of my first nine days of the hunt were spent trying to locate the band of rams, but we had no success. We packed up camp and went our separate ways, just in time for wildfire smoke to fill the skies.

Weeks went by as I sat out during my hunt. I kept tabs on my hunt unit’s weather from 350 miles away. The air was filled with smoke and the visibility was low as I waited. All this time off from hunting gave me some time to ponder my next strategy and review all the intel I had gathered from my research. I made plans to hunt the final nine days of my hunt season. During my six and a half-hour drive to my unit, I mentally prepared myself for the reality of eating the tag. I was at peace with it. I knew that regardless what happened, I had a satisfying experience, but it would be so much sweeter if I harvested.

I met my buddy, Donnie, at base camp. The air was filled with wildfire smoke when I arrived. It was just an obstacle I was going to have to overcome. We formed a glassing strategy that always kept the sun to our backs. My brother-in-law arrived early the next morning as we split our different directions to glass the sheep country. I reached a vantage point in the adjacent hunt unit by dawn. The smoke was limiting my long-distance glassing, but it was getting better as the sun’s rays got stronger.

Within minutes, I spotted five sheep, all rams, on a treeless ridge that was nearly three miles from my position. I tried to size them all up from that distance, but it was difficult with the smoke. I could tell one’s body was bigger than the others and its horns were easier to see. I had a feeling these rams were part of the same band earlier in my hunt season. I rushed down to the nearest road to round up my sheep hunting squad.

By mid-morning, we had our gear prepared and a plan of attack. The rams were located near the skyline of a ridge, but there was a lot of country along the ridge above them. Donnie and I decided to hike up the opposite drainage and get above the rams, then work our way along the ridgeline towards the rams to get a better look. We kept off the skyline as to not expose our position on our way to the rams.

We found four of the rams bedded against some rocks on the ridgeline. I set up my rifle in a prone position while Donnie continued to look through the spotter. We were 575 yards away with a small drainage between us and the rams. The biggest ram was perched on a rock shelf above the others, and he was worth tagging. All I could see was his head, though. We watched the rams in their beds for three hours. They would occasionally get up to stretch and turn around, but my ram would not get up. I waited for my best shot opportunity.

I had to take several breaks off the gun to stretch and hydrate. During one of my breaks, I heard a coyote cackling below us in the opposite direction of the rams. I did not think much of it. Donnie firmly whispered to me, “They’re up! Get on the gun.”

I threw myself to the ground and slid into position. All the rams had stood up and were alert, looking for the coyote. This was my chance. My shooting rest was stable. The scope elevation turret was dialed to my yardage, and I squeezed off the trigger. “Smoked him,” Donnie said.

That coyote was the good fortune I needed! On my traverse to my ram, a wave of emotion hit me. My wife and three young children had been praying for me during the 23 days I was absent from their lives to pursue this dream hunt. Making them proud will forever be memorable. I laid my hands on the beautiful ram I harvested. It was an unmatched feeling of complete closure to an incredible adventure.