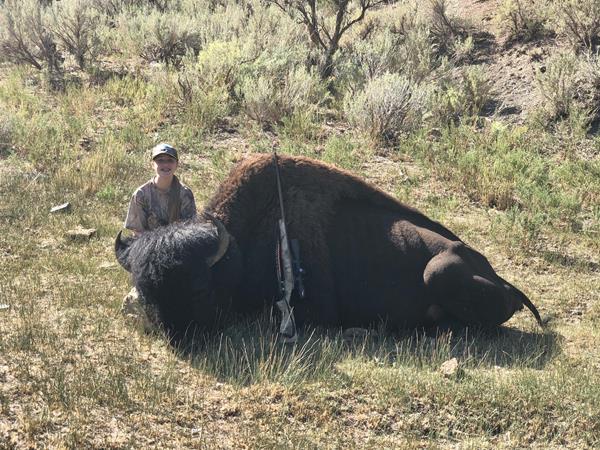 On May 13, 2020, my brother, Braden, my sister-in- law, Rylee, my sister, Morgan, and I received this text from my dad, “One of you four is the lucky winner of a once-in-a-lifetime tag. Not sure which one yet. Braden – goat, Morgan and Rylee – moose, or Sydney – bison! What one will we be hunting? Who knows, but one of them!” After that day when the credit card was hit, we were anxiously waiting for the results to come in. The next 48 hours were excruciatingly painful, but finally, the results came in. At the age of 14, I had drawn the once-in-a-lifetime, any weapon, either-sex bison tag for the Book Cliffs area. When my dad told me this news, I couldn’t help but jump for joy!

Now that the reality that I would be hunting bison in a few months had set in, I knew that I had to start preparing right away. I started out target shooting with my dad’s Savage .17 to get used to finding targets in the scope and being comfortable loading and unloading a bolt action rifle. Next, my dad and I decided what caliber I should use. We finally decided on the Browning Hell’s Canyon LR .300 Win Mag. Now that I had picked the perfect rifle, we began to scout.

During the summer months, we took countless trips down to the Book Cliffs in search of bison. We searched high and low from Steer Ridge to Woods Canyon hoping to find the bull of my dreams. During our many scouting trips, we saw a lot of bison. One of the first bulls we saw was on Steer Ridge, which we named “Bruce.” He was a good, mature bull, but his horns were pretty broomed, making him a litter smaller than the bull I was hoping for. With Bruce on the back burner, we continued to search for my dream bull. The next mature bull that we saw we named “The Gorilla Bull.” When we first saw him, he was on a trail camera on Cherry Mesa. We knew that we needed to get a closer look. We covered a lot of ground and finally spotted him. This was a very good bull. We didn’t think that there could possibly be a bigger bull in the unit. That is, until we saw “Bruiser!” When I first laid eyes on this monster, I knew this was the bull of my dreams.

After we saw Bruiser, we came back to the same guzzler where we first spotted him, and much to our surprise, he never moved. I was so excited. As the hunt got closer and closer, Bruiser stayed within a quarter mile radius of his water source. As opening day rolled around, I figured this hunt would be a breeze. We snuck into Bruiser’s guzzler, and immediately, I was shocked. Bruiser was gone! We looked for him for a while, but he was nowhere to be seen. Feeling discouraged, I decided to look for The Gorilla Bull. After a short time, we found him and I set up multiple times, but every time I put him in my crosshairs, all I could see was Bruiser. Knowing The Gorilla Bull wasn’t going anywhere, we decided to go after Bruiser one last time. We drove down every canyon and every draw we could think of, and finally, down a long, deep canyon all alone, we found Bruiser.

I quickly jumped out of the truck, and in what seemed like a second, my dad set up the tripod and I found Bruiser in the scope. My dad ranged the bull and said, “348 yards.” I put my sights behind his front shoulders, took a breath, and slowly squeezed the trigger.

My brother, Braden, yelled, “You hit him good. Shoot again!”

I quickly kicked in another round and shot again. “You hit him again!” Braden said.

“Shoot him again!” my dad cried.

I loaded the last shell into my gun, and with my final shot, the giant fell. After I finished shaking and jumping in excitement, we walked up on a true giant of a bull. I had killed the bull of my dreams; I had killed Bruiser.