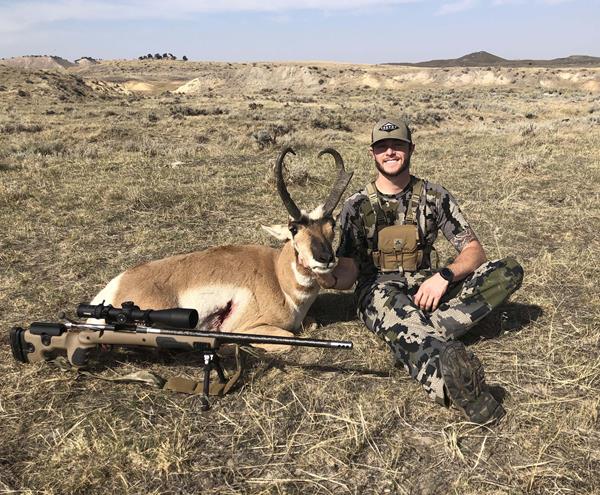 On the afternoon of May 30th, I received a phone call as I was leaving work. It was Mr. Milt Burris. He was calling to let me know they had a spot open for their Wyoming antelope trip and wanted to know if I’d be interested in going. “The deadline to apply for the draw is midnight tonight,” he said. I immediately rushed back inside the office to get online and apply.

When the draw results came out in mid-July, I got on my Huntin’ Fool app to check them. We had all drawn! This was going to be the second year in a row we had been drawn for antelope in Wyoming. After discussing the best dates for us to go, we decided to leave on October 8th and hunt through October 12th. From where we live in South Mississippi, our drive would be a little over 24 hours to where we were hunting. Knowing that our drive would take over a day, we didn’t have any time to waste once we arrived.

After driving all day and all night, we finally made it to camp around 11:30 a.m. on October 9th. After unloading the truck, we gathered all of our gear and headed out for the rest of the day. At our first glassing point, we spotted a group of about 20 antelope that were bedded down on a nearby ridge. After close consideration, we decided to pass on this group in hopes of finding a better buck. As we were hiking to another spot, I noticed a small group of four feeding in the sage. After a closer look, one of the bucks really stood out to me and I couldn’t pass up this opportunity. At this point, the bucks were at around 800 yards. I needed to get to at least 400 yards for a comfortable shot. Keeping cottonwood trees between us and the bucks helped us close the distance even more, and I was able to set up for a shot at 342 yards. After getting the range on him, I squeezed off the shot and drilled him! By 2:45 p.m. on the first afternoon, I was on the board with a great buck.