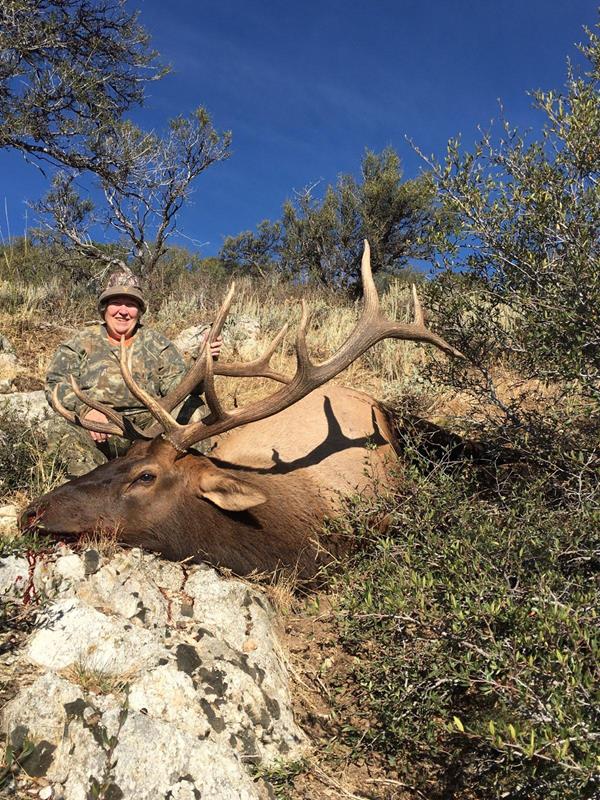 What a super vacation! We were enjoying the splendid views of Yellowstone National Park and relaxing in the warm summer evenings when we got a phone call one evening. Our oldest son, Eric, asked if we are sitting down. Of course, this couldn't be good news. We wondered what had happened to a grandchild or who had been in an accident or something worse. My mom, Carol Prentice, had drawn one of the five most coveted elk tags in Idaho. What a surprise! Thank goodness the call was for good news. We started planning right then for the hunt. Grandma was to start hiking three miles a day while on vacation and we would get on the range as soon as we got home.

Eric contacted Huntin' Fool for information they had regarding the hunting unit. Carol pulled out old maps she had of the area from doing some prior field work there. The .308 was taken to the gunsmith to have it shortened by a few inches to give her a better fit. We spent hours at the range to get her comfortable with the gun, which was a little intimidating compared to her .243.

Scouting the unit was intense. Eric Prentice, Mike Prentice, and Carol headed to the area that Eric’s contacts from Huntin' Fool have advised should have some elk. The first scouting trip was a month and a half before the start of the season. We only saw two bulls, but both were over the 350" mark. That got our blood pumping! We also got familiar with the roads and terrain. Return scouting trips found us getting to know local landowners and gaining even more access and elk herd information. Landowners even made sure we had a location to park our trailer.

We arrived at the hunting unit four days prior to the season opening. Each morning and evening, we were scouting for elk. Did I mention the season opened while the elk were starting to rut? Finding elk was not difficult due to the chorus of bugles from many herd and satellite bulls. The cows were in groups with the bigger, stronger bulls, and the smaller bulls were close behind. It was just amazing seeing the number of animals and taking super pictures of the numerous elk and big, respectful mule deer.

Daylight on opening morning found us glassing the area that had held numerous elk herds roaming the mountainsides. Due to the human traffic during the prior two days, there was not an elk in sight. Now was the time to draw upon the advice from the Huntin' Fool contacts regarding where the animals would be pushed to. They were spot on! We headed to a ridge and walked to the crest for a view of a draw and lower valley with cover. As we crested the ridge, there was a great bull following a trail down the draw to our left. Carol took a sitting position as Eric ranged the bull at 272 yards. The bull stopped to look to his left, giving Carol a right shoulder shot. The early opening morning silence was broken by the report of the .308. There was that distinct "whop" as the bullet hit solid in the right front shoulder. As Carol racked another round into the chamber, the bull took two steps and went down.

All the efforts Carol had put in preparing for the hunt paid off. Mike will have to take her back to Yellowstone National Park again so she can enjoy the park without daylight to dusk hikes. Not bad for a 69-year-old grandma. Also, a fun fact about Carol is that she was the first female Fish and Game officer in Idaho.