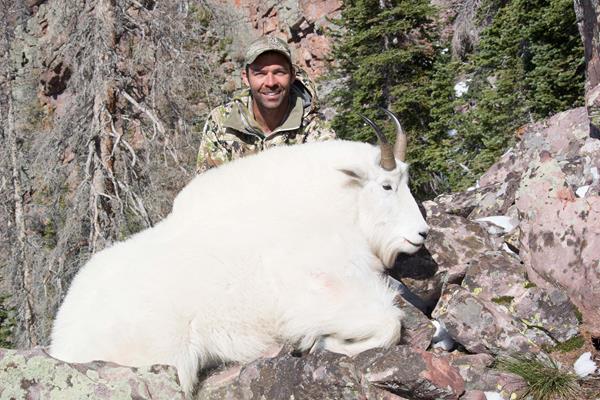 Tough. Rugged. Unique. Extreme. Undaunted. Highly adapted. All of these are words that come to mind when I think about the North American alpine antelope we call mountain goats. For me, mountain goats are set apart from all other North American big game animals in their ability to thrive in a hostile habitat. I’ve hunted these uniquely beautiful creatures in Alaska, Montana, and Idaho. Each time, I’ve been left in awe at how they casually shuffle and graze their way through life in places where one imperfect step could mean death. Now that I’ve hunted them in Utah, I’m in awe at their ability to simply vanish.

I wasn’t supposed to draw a goat tag in 2017, and I definitely wasn’t supposed to draw one in Utah! With only a handful of goat points in Utah, I expected to be decades away from drawing one of their coveted once-in-a-lifetime (OIL) tags, but there it was, that little word that changes everything, “Successful.” This was another reminder that the application game is always unpredictable and our odds are only zero if we don’t apply. Immediately, I mentally switched gears and began making calls, shifting schedules, and researching the western front of the rugged Uinta Mountains of northeastern Utah. Having been on my share of mountain hunts, I knew it would be self-guided, but a solo goat hunt was a serious risk, so I called in a favor from my longtime friend and hunting partner, Brad Seyfert. We started scheduling out the fall and settled on the first week of October. In my mind, a mountain goat’s hide is just as much a trophy as the horns, so I wanted to wait for that risky window between haired-up and snowed-out. I got it wrong.

Utah does a great job of providing information about their hunt areas through their website, especially for OIL species. They even go so far as to give a synopsis of an area’s best habitat spots, weather patterns, and access points. The local biologist and several conservation officers were very friendly and willing to give me pointers on where to look for goats within the unit. Every bit of information is valuable when preparing for once-in-a-lifetime hunts. With their advice still echoing in my ears, I headed to Utah in early September to scout up an old billy. It has been my experience that old mountain goats have their core areas and they stick pretty close to those spots. I’ve seen an old billy stay within 800 yards of his bed day after day, and I knew that if I could find one of these bedroom areas the goat would likely still be nearby in October. It took me several days to get accustomed to the 10,000 foot elevations, but I managed to put eyes on most of the unit’s better areas, glass up 70+ goats, and locate several good billies in their core areas. As I returned home, I was confident this hunt would play out as my other goat hunts had and hopes were high.

Goat season opened on September 16th. The same day, heavy snow started to fall in the Uintas, a month before it usually does. When Brad and I arrived in October, there was over a foot of ice and snow on the mountaintops and more in the forecast. We scoured all the places where I had scouted goats but found nothing. There was no sign of the billies I thought would be loyal to their hideouts. As we scoured the cliffs when the blizzard broke for an hour here and there, temperatures crept into the single digits. All of the mountains and passes I had memorized amounted to empty white space. The only movement was snow blowing over treacherous cornices. We moved camp a few miles further back into the unit to explore new peaks. We endured frigid nights in the tent, boots so frozen we couldn’t get our feet into them, and mile after exhausting mile of post-holing through the snow looking for any sign of goats. They had simply disappeared.

On day four, we discovered a set of fresh mountain lion tracks near our camp. We found the cat had come up over one of the tallest mountains in the area and concluded he was also after goats. Once off the mountain, the tracks made a straight line heading northeast toward a deep canyon down near the edge of the snowline. Demoralized by the failure of our current hunting strategy, we discussed the possibility of changing tactics, moving camp again, and abandoning our ideas about where the goats should be. As hunters, we’re often faced with the choice of trying harder with the strategies we know or changing tactics to adapt to changing conditions. With that in mind, we packed up camp and headed after the lion.

We crested the ridge overlooking the steep canyon about an hour before dark. It was much steeper and deeper than I expected, only visible from its edges, and the rocks on the far side whispered “goat country.” My heart soared as we started counting animals in the fading light. Looking more like a herd of white buffalo, more than 60 goats were grazing across the opposite side of the canyon well below snowline. I couldn’t believe how quickly these beasts-thecolor- of-winter would abandon their high places at the first good snow. Spotting scopes confirmed that most were nannies and kids, but a couple young billies moved nearby.

The next morning dawned clear, and we were quick to give up the young billies when I glimpsed a lone goat in the crags even further down the canyon. We planned our route, geared up, and plummeted into the canyon. Many hours and over 5,000 feet of elevation change later, I was peeking over a rock ledge at an excellent billy, bedded and oblivious. When I squeezed the trigger, he had no idea what had happened. He went down only a few feet from his bed.

It was well after midnight when we made it back to camp, nearly exhausted but happy. The next day, after thawing out our boots one last time, we packed the seven miles back to the trailhead. The hike gave me plenty of time to reflect on the hunt. I’m always in awe of God’s creation when I’m in the big mountains and in awe of the creatures that feel at home in such hostile places. I have a new respect for the unique and beautiful mountain goat and their ability to thrive in the cliffs. I’ve learned that part of their survival strategy includes migrating to wintering areas miles away, sometimes through thick timber. Just because they’re white doesn’t mean they love snow. I’ve learned that my lungs at 2,500 feet are not my lungs at 11,000 feet. I’ve learned that there’s a lion somewhere in Utah that probably knows more about mountain goat hunting than I do. More than anything, I’ve learned once again that as a hunter I need to be willing to weigh the information I have, consider that old methods and ideas might not fit the current situation, and be willing to adapt. Although this hunt was the most challenging of my life so far, I wouldn’t have it any other way. In this hunter’s opinion, mountain goats continue to stand above the rest.