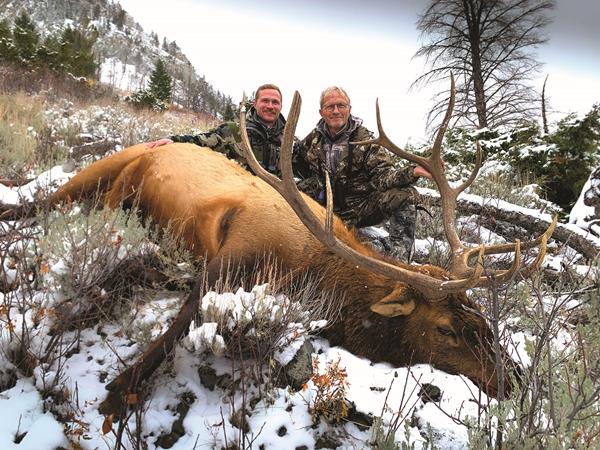 “Got him,” I heard as I watched the bull crumple, still in shock of what had happened. However, the celebration was on hold. “Quick, there’s another one.” Were we about to punch two tags on the first morning of a 10-day trip?

Like many hunts, it started long before stepping foot in the unit. My family and I moved from Wyoming to Oregon several years ago. After wrapping up my 2020 elk season with only miles on the boots and memorable campfires to show for the effort, I called my dad. The weather had pounded us with snow, but the elk were elusive again and my patience was wearing thin.

My answer was determined, “Next year, we’re going back to Wyoming.” And so began our search for a special hunt. Something worth going all in on. Double or nothing. I had recently turned 40, and my dad was almost 70. Our last big hunt together had been almost 10 years ago, which led to Dad’s first elk. We were overdue for another adventure.
We knew we’d stand the best chance of killing two mature bulls by getting deep into elk country. Without our own livestock and limited saddle time, we settled on finding an outfitter worthy of our dollars and vacation time. After extensive research on units and terrain, scouring reviews, and some soul searching on trip logistics, we cobbled together a wish list.

With an urgency to put our plans in motion, we didn’t have the luxury of hard-to-draw areas. General tags were our tickets, and with some luck, I struck up several conversations about an outfitter that kept rising to the top.

Fast forward 10 months and bags were packed for Northwest Wyoming, ready for a wilderness hunt that would test our limits and offer the ingredients of an elk hunting dream – a legit chance of mature bulls in the pristine high country with the closest family we had on Earth.

The night before finally arrived and brought a winter storm watch with it. De´ja` vu from the previous season set in along with a sleepless night filled with the anticipation and excitement that only a hunter appreciates. By mid-morning, it was pounding sleet as we started the half-day’s ride to base camp. Sleet turned to snow and began accumulating as we pressed on. After several climbs and descents, some bonding with our horses through sure-footed traverses, and an endless supply of cowboy tales, we arrived at camp. It was tucked into the edge of a lodgepole stand and strategically sat at the base of several high alpine drainages. Breathtaking elk country.

We’d selected this spot and South Fork Outfitters for a few reasons. The location was rugged, impressive, and historic. From early season resident bulls in the basins to established migration routes that consistently produce, the country is legendary to the select few who’ve experienced it. But unlike most outfitters, this group takes a special management approach. Longer hunts, fewer hunters, and overall better odds. With the weather still socked in and snowing hard, we turned in for another sleepless night.

In the morning, heavy snow blurred our headlamp lights as we rode off. Barely a mile outside of camp, climbing through timber in the dark, the distinct sound of a bugle broke the silence. I looked at my dad, smiling, and said “Did you hear that? It’s gonna be a good day.”

We eventually reached a thicket, tied up the stock, and continued on foot as dawn was settling. The snow had lightened, but it still pushed us under a patch of pines to glass across the drainage.

“They love to cross through those openings,” explained our guide, Joe. “Let’s get comfortable and watch this for a bit.” After an hour or so with the snow coming and going, we discussed our plan for the day. “With all this weather, there’s a good chance the elk won’t move much today, but you never know.”

We moved further up the canyon slowly on foot. It was mid- morning, and the weather had tapered. Fresh snow dampened our steps, but the forest had an air that everything was on edge. Sure enough, we spooked several mule deer from their beds. We crept on to a new vantage point.

Several more deer showed up across the canyon, and we glassed them briefly and chatted about their appearance. Then my dad whispered, “Hey, there’s an elk too!” Excitement took over as we all noticed the bull. He had crested a knob across the canyon from us but stopped behind a group of trees.

“I only got a glance, but he looked big,” Joe said. We all glassed quickly, noting the back half of the big-bodied bull that fed behind a cluster of trees. Instincts took over as I immediately set up. Our hillside was steep but open, so movement had to be minimal. I quickly lodged some shooting sticks under my rifle and tracked the bull. Soon, a second bull emerged and was eventually followed by a raghorn and a spike. Game time.

The first bull had yet to reveal his true size, but we knew he was decent. The rest casually fed around the area, but our target stayed planted behind the trees, almost instinctually. “That second bull is also pretty nice,” said Joe. “He’s wide, probably 300.” He was not urging me, but in true guide fashion, he was making options known as things unfolded. “I’m gonna wait on this first one,” I explained, to which they all agreed.

For a 10-minute eternity, the first bull clung to his trees of safety. I’d since added my backpack for a rear rest, determined to deliver a sound shot at the 287-yard distance. To avoid scope fatigue, I went back and forth between glances at the hidden bull and focusing on my breathing. Finally, he stepped out, quartering away and flashing a heavy 6x6 frame. With no time to split hairs on his mass, we knew he was solid and worth the wait. My shot appeared to hit, but he remained standing. Drawing full composure, I reset and delivered another round.

This time, he hunched up, as if absorbing the 150 grains into his shoulder but still not buckling. Trying not to panic, I aimed for a third shot. “Hit him again,” came the calm coaching.

Being in heavy grizzly country, we knew a lot could go wrong in this situation, but fortunately, the tough old bull had enough and went down with the final hit. Meanwhile, my dad had set up below me and was already on the second bull. “It’s your call, but he’s a solid shooter, too,” Joe said. While the herd bull was down, this second was not a typical satellite.

With a composure that comes only from experience, Dad confidently dialed up the bull. Incredibly, after all the commotion, the elk was still within a comfortable range at 302 yards. As if mocking the numerous hits from my once trusty .270 WSM, Dad sent a commanding bark from a .300 WIN for a square hit. The bull staggered behind a boulder as we anxiously watched for a follow-up opportunity. He never stood, but we waited him out for what felt like another eternity, not wanting to chance anything.

After an agonizing hike back to the horses and an even longer ride up the canyon, we finally began the ascent to our bulls as emotions set in. Having not one but two celebrations etched this memory into eternity for both of us. My bull was a heavy, old warrior that clearly pushed mass to his proud horns for years. Dad’s bull boasted a beautiful typical frame. With eventual scores of 348" and 321", we were both over the moon with our accomplishments. To tag out minutes apart on two incredible bulls in a general wilderness area was a chapter in this story we never saw coming.
We were grateful for the task of dressing and packing the bulls off the steep canyon, but we were even more thankful for our guide and pack string to get us away from the grizzly bait after the work was done. The triumphant ride back to camp was like a parade for three. Just us, the majestic views, and complete satisfaction. We spent the next few days exploring drainages around camp, fishing, and relishing the success with our new friends.

Without rushing back, we packed out a few days early to hunt for deer on a tag I had brought along for a just-in-case activity. After exploring more impressive country, I was fortunate to harvest a buck on our last day. Nothing big, but it was an added bonus on an already unforgettable trip.

We’d doubled down alright on two unbelievable bulls and memories. The bar is now set high for future hunts, but that won’t keep us from trying.