From B.C. With Love 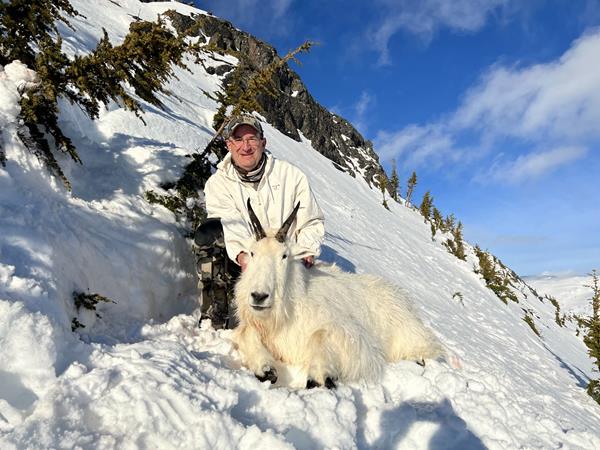 After a goat hunt on Kodiak Island a few years back, I felt the need to pursue even bigger goats, and what better place to do that than in the mountain ranges of British Columbia during the middle of winter? When an opportunity arose a few years ago to bid on an auction hunt with Bob Milligan, I jumped on it. I wanted to experience a late season hunt, and Bob takes a few hunters in January and February every year; we set the dates for the middle of February.

By the end of January, Bob had sent several photos of goats he had taken the previous few weeks. One had horns over 11", and the other two were over 10", which made my gym workouts go that much more quickly. Before long, Bob and his son, Bobby, were meeting me at the airport in a downpour. We gathered my gear and were off to dinner to a local steakhouse in Terrace.

The first few days were to be spent looking for a monster that had become a ghost. He was over 11" and had a ton of mass, but he had only been seen a few times over a three-week period in the same general area. We got up to the spot first thing in the a.m. and started glassing and found several goats but not the “monster.” We found another big billy back in the valley that had a lot of mass. It was decided we would go for him the next day if we couldn’t find the monster in the a.m.

The next morning, we were back on the mountain early and found our billy, but he was not the monster that we were hoping to find. Snowshoes were donned, and the hike started. It was supposed to be a short hike until we had to cross a creek and then once on the other side a two-mile hike to where we would start a climb up the mountain. Fortunately, the hunt started on the valley floor, so it was easy going, but due to heavy rains the days before, the crossing that was used to get to the other side was gone. After a two-and- a-half-mile hike, we couldn’t find a way to cross the creek, and for half a mile, we were on some wickedly sloped ground that almost sent me into the creek a few times. At one section, we used ropes to help get us down to a flatter spot. I think Bob was impressed with my lack of cussing and enjoyed watching me save myself a few times from going into the creek when the snowshoes gave out against the hard, crusted snow. By the end of the day, we had done about six and a half miles and got within a few thousand yards of our intended goat, but we just couldn’t find a way to cross the creek.

We contemplated coming back the next day with waders, but Bob wanted to check out another drainage. At the first glassing spot on day three, Bob found what he was looking for – a big billy. We had to trailer the quads to get over to the mountain range the goats were on, and before we knew it, we were heading up the mountain.
The first few glassing spots didn’t produce the nanny, kid, and billy we had seen, so we continued upward. It was slow going for me as the snowshoes slowed me down and I lacked confidence in them while on a steep mountainside. We got to the top and tried to wait the goats out but to no avail, so back down we went.

At one point, we stopped to glass back and found the nanny and kid under the ledge we had been on, but not the billy. That five-mile roundtrip journey produced some amazing views as the weather had been great the past few days and some good banter with Bob and Bobby on the hikes made the time go quickly. We had their border collies GiGi and Cali with us the entire time. It was the first big game hunt I’ve been on with dogs, and they were great to have along. I was amazed at their ability to sit still and not bark while we were glassing.

Day four was spent driving around looking at new areas as we had hiked around 11 miles the past two days on snowshoes. It’s amazing how Bob and Bobby could find these goats miles away and still be able to judge them. I don’t know if anyone else knows how to judge billies as well as they do, and halfway through the day, they found our intended target for day five.

Using Google Maps, we were able to confirm the correct logging road to the drainage that we needed to be in. We brought chainsaws in case the trail had to be cleared as it was only the second time into this area for Bob.
The beginning of Valentine’s Day went smoothly, and we parked at tree line with the sun shining and an amazing view of the snow- covered mountains. We climbed a few miles and arrived at a big open bowl on the edge of a mountain. We saw the tracks of the two billies we were after, and Bob had me get ready as this was probably going to be up close and personal once we found them. After slowly making our way to the top, we couldn’t find them. We went back down to where the freshest tracks were to sit down for the day hoping they’d show themselves.

Bobby went lower to see if he could see them below us, but he came up empty. I was enjoying the sun and weather as Bob sat on the edge looking over the mountain where he could see the trail he thought they would come up. After a few hours, Bob was motioning me to crawl over. I noticed Cali was by his side staring at something down the mountain. I crawled over to them and quickly saw two goats making their way towards us. I remained frozen until the lead goat, which was the one we were after, ducked behind a rock. This allowed me to get into a prone position as they were now 70 yards away.

Bob whispered to just wait. The billies continued their ascent towards us with the lead goat stopping 50 yards away on a rock, giving a perfect broadside shot as he looked down the mountain. It was an image that will forever be ingrained in my memory. He was stunning with his thick fur silhouetted against a far distant snow-covered mountain range. At that point, the 7mm Allen Magnum barked, with the billy not going far. I turned around to thank Bob, and we congratulated one another with my back to the goat. Suddenly, Bob started saying, “No...no... nooooo!” I turned to see the billy sliding down the mountainside. Fortunately, there was a group of four or five treetops sticking up through the snow that stopped his momentum as there was nothing else stopping him from sliding several thousand yards to the bottom.

Time was taken for pictures and cleaning. The hike back was all downhill. It took me a little longer with the snowshoes, but it was all smiles. We got back to town and enjoyed dinner at a local tavern, and the following day, we went to a hot spring where we were able to soak our tired legs.

The trip was an amazing experience ending with a toad of a billy that was well over 10". Both Bob and his son, Bobby, are first-class guides and a true joy to hang out with on the mountain. Bob has an unbelievable area for goats. If you ever want a truly amazing winter goat hunt, he is hard to beat. I need to thank my ever- loving wife for giving me permission to be away on Valentine’s Day to pursue my love of the hunt.