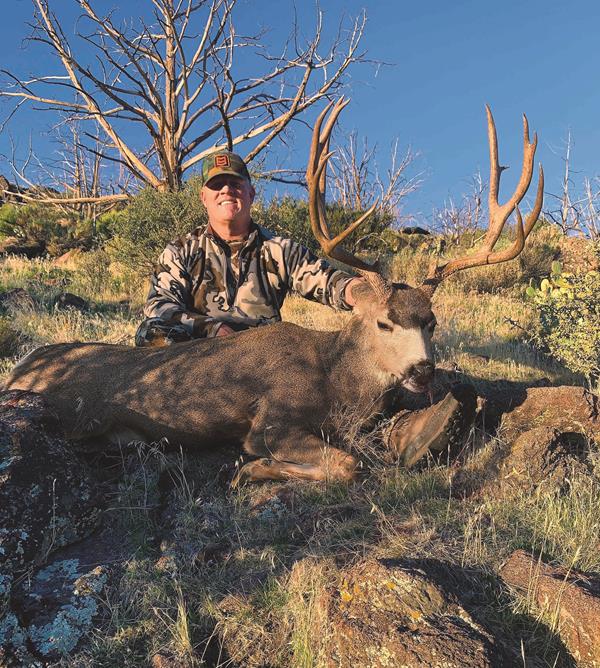 If I could only pick one animal to hunt for the rest of my life, it would be mule deer. Every year, hunting season begins with the same anticipation I had when I was 12 years old, which was finding a buck large enough any hunter would consider it a trophy. Like many hunters, I have spent many years applying for quality units with the same unsuccessful draw results each year. This led me to over-the-counter tags. I made the strategy of hunting the same area every year until I figured out the animals’ patterns. In the first few years, I began harvesting 160" type deer, then some in the 170’s, and over the last few years, I have harvested three 180" class mule deer. During these hunts, I had seen a few giants, but I had never connected on one.

This year, my luck in the draws finally changed. I was notified that I was drawn for a Hunt Expo tag in Utah for a late muzzleloader buck hunt. I chose to apply for this unit because I was aware of a big buck that had been harvested on this hunt a few years earlier. Within a few hours of being notified of drawing this tag, I received a call from the staff at Huntin’ Fool. They wanted to touch base and see if they could be of any assistance either through recommending an outfitter or sharing their knowledge of the unit. They told me this was a really good tag and it was just out their back door. I told them I had just found out about the drawing and would have to think about what I was going to do. Over the next few days, I decided I was going to do this hunt self-guided. I really felt that I would get the most satisfaction out of doing this on my own, and this would be a great test of my hunting abilities.

In preparation for this hunt, I started with the basics of online research, checked out areas on Google Earth, and even talked to a few friends who live in the area. From this research, I decided not to scout until immediately before the hunt. It was a 12-hour drive from my house, and the deer would not be in the areas they rut during the summer.

Before I knew it, I was heading to Utah to start my adventure. I had never set foot in the unit, but I had picked four or five locations to look over upon my arrival. I started checking these areas, finding a few little bucks and a lot of does running around. This was a true desert hunt. Finding deer was easy in the few places they lived, but you could drive for hours in the rest of the unit and never see one.

On the opener, I set out to look at some new country and try to find a buck that would break 190". With the weather in the mid 70s and the general rifle season ending two days earlier, this was shaping up to be a difficult hunt. In the first few days of scouting and hunting, I had seen a healthy population of does and a few small bucks but nothing promising.

At this point, I felt it was time to change my tactics a little bit. I decided to give up on the hope/thought of big bucks parading around everywhere in easy to find spots. I had learned the lay of the land by now, and I figured I would try hunting in areas that may give a buck better cover or terrain that would allow them to live to an older age during the general seasons.

The next morning, I went out and saw four or five 2-year-old bucks. Midday, I went on Google Earth and onX and looked for more areas like that. By trying a similar looking area, I found myself looking at a 3-year-old buck that was tailing a doe just before dark. Finally, I saw an older buck with a doe. Maybe the rut would be coming soon.

The next morning, I found myself on a knob overlooking a burn that was on the edge of some remote canyons. I found a 4-point bedded on a rock outcropping right at daylight, but I had to wait for better light to see how big he was. While I was glassing him, I saw several other herds of deer and a big-bodied deer feeding up a draw about 800 yards away. I immediately spun the spotting scope to it. I only caught the back half of the deer before it disappeared. I had to move two draws closer to get a better look, and upon arrival, I saw 10 does and a 4x3 buck in the head of the canyon. I knew none of these were the dark-colored, big-bodied deer I had seen go into this draw from my original glassing knob. About that time, I caught movement 150 yards below me. It was a nice buck. I quickly set up the muzzleloader and figured I could judge him in the scope at that range. Then I would be ready to shoot if this was an exceptional buck. It turned out he was a low 170s type buck that was about 26" wide with good forks. I decided I was only shooting a buck that had a “Wow!” factor or I would eat the tag.

Saturday morning, I woke up before my alarm went off, hearing truck after truck and countless side-by-sides coming by camp. I figured it was the weekend and many tag holders probably had a lot of friends coming up to help look around for a good buck. I headed out to an area where I had seen about 50-75 does in a few square miles of quality habitat. It was on the edge of some really nasty, remote country, and I felt it would be the first place a big buck would show up when the rut hit. I was set up on a knob not far from the road, waiting for glassing light. I learned from hunting areas that have a lot of hunting pressure that many of the mature bucks would be bedded within 10 minutes of shooting hours. I started glassing a clearing when I heard a side-by-side coming towards me. It turned out the trail they were on went right through where I was wanting to glass that morning. This made me move down the ridge to where I could see into the next canyon.

When I got there, it was about five minutes after shooting hours and I could see four does feeding in a clearing. I glassed the surrounding areas to see if they had a buck with them. When I pulled my binoculars down, I caught movement in a distant saddle. Pulling them back up, I saw a huge-framed buck feeding. I quickly set up my spotting scope, only getting a few seconds to view this buck before he went over the hill into the next canyon. I could tell he was a shooter. I could also see hunters glassing on what seemed like every knob around me. I was moving quickly when I bumped some does that I had not seen. They ran up, turned to me, and stood in the saddle that he had gone through about 15 minutes earlier. They stared in my direction for what seemed like 20 minutes. As I waited, I hoped I would not hear a gunshot on the other side of these does. I continued to wait, knowing if I bumped them again they would run him out of the country.

Finally, they turned around, walking swiftly over the hill. I rapidly got to the top of the saddle and glanced over. I could see about 20 deer feeding at about 100 yards. I put my gun on the shooting sticks for a quick standing shot. Using the scope, I looked over all the deer. He was not there. It had been more than 40 minutes since I had last seen him. I began to frantically glass all the close surrounding areas. Catching movement, the deer now noticed I was there as they filed over the ridge one by one. He was still not with them. I figured my best bet would be to hunt around really slow, counting on him still being there. I started by walking the direction I had last seen him headed, and I noticed three more does on the other side of the draw roughly 200 yards away. Not seeing him, I eased to where I could see in the bottom of the draw below them, but he was not there either. I decided to walk back to the saddle he originally went through and look into the big canyon the opposite direction of where he was heading when I last saw him.

I walked up quietly to the edge of a rock ledge, and when I peeked over, I jumped a small 4-point at 10 yards. He ran out of there at full speed. I quickly took another step or two. The next deer I saw was the type of buck I had been looking to harvest for the last 30 years. He was feeding but snapped his head up to see what all the commotion was about. He was 40-45 yards broadside. I had my shooting sticks in my left hand extended out for a standing shot, but I felt he would be gone before I could set them in front of me and put the muzzy on them. I decided to just drop them and take a quick snapshot off-hand. He green scored 195 6/8" B&C.