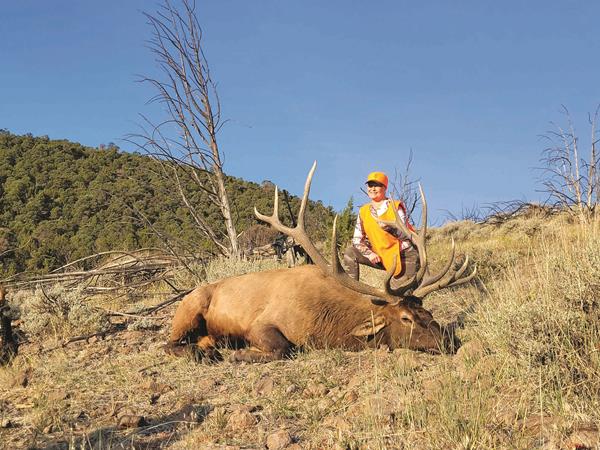 The voice on my wife’s phone said, “Happy birthday!” Perplexed, Jill replied, “Thank you, but it’s not my birthday.”

Undeterred, the voice continued, “Is your birthday June 24th?”

“I have exciting news,” continued the stranger. “This is the University of Utah Transplant Department. Someone wants to donate a kidney to you, and he has requested the surgery take place on June 24th, your birthday!”

Jill had been waiting for a kidney for over a year. Plans were set for a birthday party with a total stranger bringing likely the best birthday gift Jill would ever receive. Two days later, she received another phone call with nearly as exciting news. At least, I thought it was nearly as exciting. This time, the call was from a familiar voice. Me. I told her she was successful in drawing a trophy elk tag.

“Are you serious!?” Jill exclaimed. “Yahoo!”

Waiting for Jill’s birthday was like being 10 years old again anticipating a new BB gun. It seemed like it would never come. When the long-awaited day arrived, Jill literally skipped into the hospital with a smile on her face a mile wide. She knew what to expect. This would be her second transplant. Fifteen years earlier, her mother had given her a kidney and the transplant went flawlessly. With her mother’s kidney, Jill felt like a new woman immediately.

Unfortunately, this time around, the transplant didn’t go as expected. Excitement soon turned into fear and worry. After surgery, the kidney was not functioning as expected, so the surgeons decided to open Jill up again. For some reason, the blood flow to Jill’s new kidney had been cut off. The surgeon flipped the kidney over and it immediately filled with blood.

It turned instantly from dead and grey to robust and healthy. Hours passed after they sewed her back up a second time, and we anxiously watched the urine output. Excited relief swept over us as she finally hit the number the doctors wanted to see. We thought we were finally in the clear. Everyone slept easy that night.

The next day, we woke up to disheartening news. Jill’s creatinine levels (levels of toxins in the blood) were increasing not decreasing. Each day, we watched for the labs and prayed the creatinine would drop, and each day, we were disappointed to see the number go the wrong way. We all worried that Jill would have to go back on dialysis and wait years for another kidney.

Months before the transplant, we hired Cody Webber with Pine Creek Outfitters to guide Jill on her hunt. We had discussed her health concerns and the upcoming transplant. We were all optimistic Jill would have three months to recover and be raring to go in September. When the expected hospital stay of two days turned into two weeks without an end in sight, I placed a call to Cody.

“Jill is really sick. The new kidney isn’t working. I don’t think we are going to make it on the hunt,” I admitted.

Cody assured me, “Don’t worry about the hunt, bud. Take care of your sweetheart. We’ll figure out the hunt later.” Although discouraged about our situation and worried sick about Jill, I was relieved Cody was so understanding.

Our third week in the hospital finally brought good news. It was slight, but it was a change. The creatinine went from 9 to 8.7. We watched the levels drop daily until the number finally hit 2. Finally, Jill was released from the hospital.

As the months passed, we were optimistic about how Jill was feeling. Still very weak and sore, she was making progress. By the end of July, walking to the car wasn’t a major event for her. August came and went, and Jill was able to walk around the block. As the air turned cooler and hunting season approached, Jill’s short walks progressed to brisk 30-minute walks.

On one of these walks, I raised the question we had been avoiding. “What do you think about the hunt?” Jill said she really wanted to go and she wanted a big, beautiful bull elk. I called Cody and told him we were going to make it!

The much-anticipated day finally arrived. While I was busily packing our trailer, Jill was at the hospital for a routine appointment. When she arrived home, she looked horrible, pale, and weak like she was going to collapse. Her blood-cell count had suddenly dropped dangerously low.

Jill said, “I got a shot at the doctor’s office to help increase the cell count. They gave me three shots to take daily and said I could go on the hunt. They said the shots will help me feel better and stronger, but I have to be extremely careful. With my white blood count this low, I basically have no immune system.” I asked if she still wanted to go on the hunt, and she told me to quit worrying so much. We weren’t coming back until we had a great big bull elk.

We arrived Friday afternoon and met Cody and Hammer Christensen. I explained to them Jill’s sudden change, and we agreed to see how she felt in the morning. “Quit worrying,” Jill scolded again. “I’m fine. I’m going to shoot a great big bull!”

I didn’t sleep well that night. I was excited for one of the biggest hunts of our lives but mostly concerned for my wife. The alarm didn’t startle me. I was awake. Great big bugling bulls were waiting. “How do you feel?” I whispered.

We arrived at the predetermined spot and exited the truck. Immediately, we heard what we had come for, the bugling of a cow-crazed bull. A huge smile spread across Jill’s face, then her eyes widened and her jaw dropped as she pointed in another direction. Another bull was replying to the first. It wasn’t long before a third joined the conversation. We stood frozen next to the truck in the cool darkness, hypnotized by the magical chorus of bugles all around us. The excitement and wonder on Jill’s face told the whole story. I knew she was going to be OK, and I knew she was going to kill one of those remarkable creatures making those wonderful, wild sounds.

Day by day, the shots started to work and Jill’s physical strength started matching her determination to harvest a bull. We saw several nice bulls but none that matched the caliber of bull Jill had determined to take. At one point, Hammer called a beautiful bull within 20 yards.

As the hunt wore on, Jill confided in me, “I don’t want a small bull. I didn’t come here to shoot a 5-point or even a small 6. I want to shoot a great big bull.”

“You will,” I assured her. Inside my mind, I was not so sure.

Jill’s strength improved each day, but we still had our limitations. Walking was not a problem. Hiking still was. I was starting to believe that she might just need to settle. Take the biggest 5-point we could find, fill our freezer with delicious meat, and have a really cool Euro mount.

On day four of the hunt, my lack of faith turned into hope when Hammer excitedly whispered, “I’ve got a bull! Oh, he’s a shooter!”

I ran from where we had been glassing to the truck where Jill was laying down, taking a nap. “Jill, we have a shooter!”

We soon realized he was right on the border of our hunting unit. We watched in disgust as a smaller bull came toward Jill’s. Keeping his cows away from the smaller bull, Jill’s big, beautiful bull ran right over the border. A plan was made to come back the next morning as they would feed right back into this bowl.

We jumped out of bed the next morning filled with excitement. We were extremely hopeful the bull would not go far. Knowing that hunting plans can fall apart before your eyes, we were thrilled to hear Hammer excitedly whisper while peering through his binos, “I got ‘em. There he is! There’s our shooter!”

“450 yards,” Cody whispered. Dialing up the scope, he handed his 7mm to Jill. The old bull stood staring at us broadside, hiding his vitals behind a large burned-out tree trunk. I set Jill up on a pair of sticks and told her to wait until he was clear of the tree. For five minutes, he didn’t move, just bugled a few times, mocking us to see who would blink first. Finally, he turned his head. His body followed, and then he briefly froze again. After what seemed like an eternity, he decided his cows were more interesting than us and took two steps toward them. I said, “Take him, Jill!”

The report from the rifle was followed by one loud “whack,” two stumbles forward, three men hollering, and a great big smile on Jill’s face.

Then something happened that people who do not hunt will never understand. Three burly, bearded grown men full of macho and bravado got a bit choked up. We had all seen how hard this hunt was for Jill. We had all seen how determined she was to kill a big elk. We saw how hard she pushed. We knew how bad she wanted this. And we had all at one time or another doubted her ability to seal the deal. That doubt was replaced by pure joy and a lot of admiration. She had done it. Jilly Bean had her great big, beautiful bull elk.