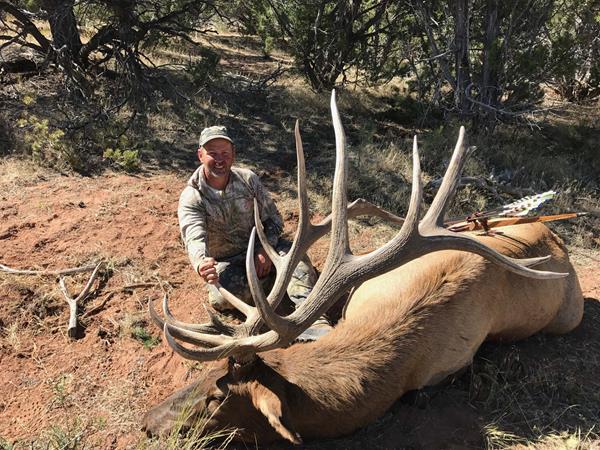 Studying western state application processes, trophy potential, and investing in points in multiple states for multiple species has been a passion of mine for many years. As a longtime member of Huntin’ Fool, the proof is obvious from the stories that grace the pages about the regular guys who have diligently invested in the potential to experience the hunts of their dreams. The best hunts come to those who wait.

In 2017, I finally decided to use my 22 Colorado elk preference points for one of the fabled northwest corner units. The tag came in the mail in May, as expected, and I started taking weekend trips up there to learn the country and get an idea of what I was in for. Although there were options available for going guided or paying for access to private property, I decided I would do it myself on public land.

On my scouting trips, I traveled light and would typically drive all day and glass from vantage points. The emptiness of the country was almost as overwhelming as the dust accumulation in my truck and the never-ending aroma of sagebrush. I soon found out that I needed to watch my step in this country for more than just cactus. Seeing three rattlesnakes in one day and almost getting bit by one convinced me that I needed to at least use a bivy to keep them from trying to cuddle up to me in my sleeping bag.

My first week out hunting was much like the summer scouting trips, I just kept moving and glassing from high vantage points. I went over four days without seeing another vehicle and then it was oil field workers up on the Wyoming line. A friend joined me for two days for a welcome break to the solitude.

That first week of hunting was very difficult conditions. The rut had not kicked in, and there was no elk talk at all. It was hot and windy with a full moon that had most of the animals moving at night. Glassing more than a mile away was difficult to impossible due to big forest fires in Wyoming and Montana.

During that first week, I did not see any elk in the mornings and only younger bulls. There was absolutely no bugling during the day or night. The big boys must have been resting up in anticipation of the big party. My preseason scouting had located several areas with a lot of girls for the big boys, and I had high hopes for the last week of the season.

It was very tough keeping my head in the game for that week back at work. I was sneaking time on Google Earth and developing strategies that would hopefully get me into some rut action and on a big bull. I talked to several guys who had bowhunted the unit years prior about where to look for the bulls when the rut kicked in. My good friend, Dan Tollar, called and said that he had time to come up from Arizona to help for the last week. It was coming down to the wire, and I did not want to be eating 22-year-old tag soup.

The intel suggested that many of the elk moved into the lower thick cedar country during the rut. I started at a strip of BLM land sandwiched between large chunks of private land where a buddy had gotten on a monster bull several years before, and I got into elk right off the bat. There were at least 12 different bulls bugling all around me. I spent the whole day playing cat and mouse with bulls and only saw one walk across a slope below me late in the evening.

Several days in this area resulted in one bull called to within 10 yards but no shot due to the cedars. It seemed like the action was slowing down on the public land and most of the elk had moved further out onto private property. After the third fruitless morning chasing screaming ghosts through the forests of cedars, I decided a change in tactics was necessary.

Dan and I moved camp approximately 30 miles to the area where I had seen a lot of cows prior to the season. That evening, we actually saw elk. The bull was not the class that I was after, but he had a small herd of cows and was out in the open. We saw and heard several other bulls in an open valley right at dark, so we knew where we would be in the morning.

The next morning, we hiked out from camp to keep from spooking or missing any elk along the way. We got into bugling bulls a short distance from camp and tried several setups in the morning without any takers. We had several bulls bugling that simply vanished into the sagebrush and cedars without us ever laying eyes on them. By afternoon, we were in good position overlooking the valley where we had seen bulls the evening before. Late in the evening, things heated up and we had six different bulls bugling back and forth. We actually had a nice 6x6 walk for over two miles off a ridge and cross within 20 yards of us as we just stood still in the sagebrush. He was talking to a bigger sounding bull just below us, so we eased up to the edge to see a very impressive 5x5. I hustled down the hill to a cedar, and Dan made a few calls. The bull immediately started our way but turned at about 10 yards and went on the wrong side of the cedar to get a shot. I tried to move and get another angle, but he caught my scent and blew out. It was quite an eventful day, and the hike back to camp did not seem so long after having a good evening of elk activity.

The wind was cranked up the next morning, so we decided to look off the mountain into lower country where the elk might be getting out of the wind. Shortly after we started glassing, we spotted some cows and a very nice bull about a mile and a half down in the cedars. I left my optics with Dan, grabbed my pack and bow, and bailed off the mountain. It was steeper than I thought with several big rock ledges forcing me to backtrack loop around until I found a good elk trail leading to the bottom.

Once I was down on their elevation, I headed for the last place we had seen them. I climbed a small rock outcrop and saw a couple of cows again on the other side of a wash moving slowly in the cedars. Crossing the wash, I was able to get right into the herd with the help of the strong wind. I stayed close to the herd, hoping the bull would make a mistake and allow me an opportunity.

After several miles and some close calls with wandering cows, I finally laid eyes on the bull. He was about 50 yards through the cedars in a small opening. With cows between us, I had to back out and make another big loop with the hope of getting in range. When I got to the edge of the clearing, he was about 60 yards away feeding. A cow that I hadn’t seen blew out right in front of me and ran past the bull. I dropped to my knees with my bow in front of me and dug out a cow call. He was nervous and looking at the cow. I hit the cow call, and his head whipped my direction. After a couple of seconds, he turned to look back toward the cow again. I gave him one more cow call. He trotted right toward me, stopping at about 25 yards, facing head-on and looking around for the cow he had heard in the cedars. I did my best imitation of a sagebrush with an arrow nocked and ready. After what seemed like an eternity, he decided there wasn’t a cow left behind and turned to go back to the herd. I do not remember drawing or shooting, just him running with fletching sticking out of his ribs tight to his shoulder. I heard him crash and knew he had not gone far. My homemade longbow and arrow had performed flawlessly, and I had my bull. I was blessed with an elk-of-a-lifetime and took a knee to give thanks.

Dan had been glassing from the top of the mountain and saw the bull run away from the herd and not return. I hiked around to the nearest road as he drove around to meet me. We were able to get the truck close for the pack out. Although I love solitude, it sure was great to have a good friend there to share the experience.