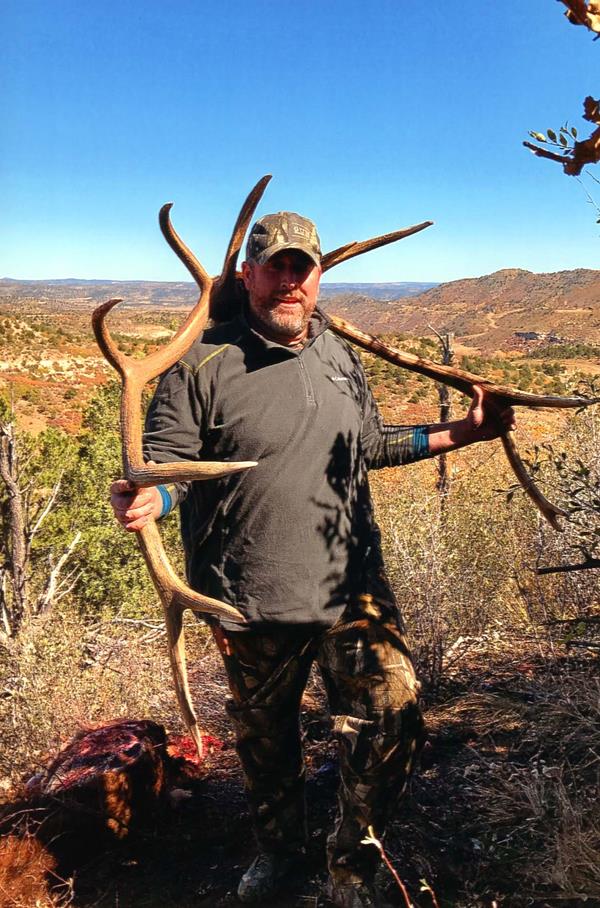 This adventure actually began over 22 years ago when my oldest son, Jeff (aka “Bucky Badass”) began putting in for Colorado in the Bosque Del Oso State Wildlife Area (unit 851) for the first rifle season, October 14-19, 2017. To say that we were both pumped up would be an understatement! Our family has history in the Bosque. We were already two for two with me drawing a third season rifle tag in 2010, resulting in a 363” 7x7. My youngest son, Nick, drew a muzzleloader tag in 2013, resulting in a big, old 5x6 bruiser. The Bosque rules are as follows: No guides or four-wheelers allowed and horses or shoe leather are the only permitted modes of transportation in this five square mile big game mecca located in southeast Colorado, near Trinidad.

To accomplish success on this hunt might seem like an insurmountable task for a couple of flatlanders like us. He’s from Florida, and I live in Pennsylvania. Nevertheless, we assembled our gear, flew to Denver, and drove our rental SUV south to the Bosque.

Opening day was relatively uneventful with regard to elk. It was way too warm at 80 degrees, with a ton of hiking, glassing, and sweating profusely. Our spirits were lifted, however, by coming face to face with a monster 200"+ mulie buck right before dark.

Day two began after a frigid night in our buddy, Henry’s, camper, without heat at 28 degrees inside! While pulling off the road to answer nature’s call, Henry heard a solitary bugle at the bottom of the canyon.

“Grab your rifle and shooting stick,” he whispered.

Down the mountain we went, sliding on our backsides more than halfway through the stones and cactus.

“To the right,” Jeff replied while he got my borrowed .300 Win Mag set up on the shooting stock bipod.

Henry let out a deafening cow call, and the bull stopped and turned broadside at 431 yards. Having just reviewed the ballistics chart on the Hornady bullet box that very morning, Jeff was quietly confident in his 18" holdover on the bull’s back and shoulder. The old “meat master’s” muzzle blast rocked the morning’s frost silence. The big, old 6x5 warrior buckled and dropped in his tracks at the top of the mesa on the far side of the canyon. By the time we made it over there, we discovered that the bull had actually expired belly up in a nearby vertical position, given the steepness of the terrain. This facilitated the field dressing job with gravity taking over after the peritoneal cavity had been opened up. The remainder of the butchering job was extremely difficult due to the thick, tangled oak brush surrounding the big bull. Several times, we almost fell backwards down the mountain while attempting to quarter out the carcass. Fortunately, Henry’s son, “X-Man” (Xavier), a 6’4” 260 lb. high school football player arrived on scene with three of his teammates to help us pack out in one trip.

This truly was a labor of love. Since my son is a classically trained French chef, the meat was put to good use. Meanwhile, Dad is still working on boiling and bleaching out the European skull mount. As I told my son, I live for moments like this. There is definitely something between a father and a son which cannot be put into word, but this is a memory which we will both cherish forever!