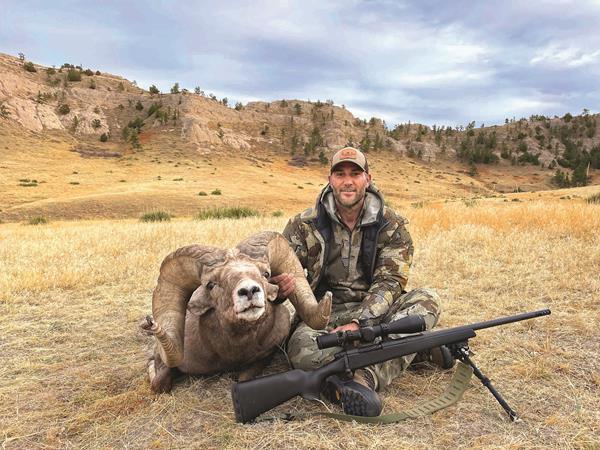 Sheep fever – there is no vaccine or booster to stop the spread. I was told that the only cure is a punched tag. I was lucky enough to harvest my first ram on Tiburon Island in 2020. Immediately after harvesting it, I knew my next step was convincing my wife to let me go after the Grand Slam. After her blessing and encouragement, my quest for the Grand Slam had truly begun.

I was extremely grateful to acquire one of only two Nebraska sheep tags in January 2021. Most of my friends and family who are not hunters believe that the hunting starts when your boots hit the mountain on the first day of the season. Not for me, though! Opening day of November 30th was a long way away, but I knew I had to start studying the country, current rams, and previously harvested rams to get a solid understanding of what to expect on the hunt.

For the next 10 months, I studied every harvest picture and Boone and Crockett entry for rams killed in Nebraska. Todd Nordeen with the Nebraska Fish and Game Department sent me several pictures of rams from 2019 and 2020 that he believed were still alive. In July, my good friend and Huntin’ Fool Advisor, Eric Bachofner, joined me on a three-day scouting trip to Scottsbluff. We were able to talk to landowners about areas the rams frequented during the November rut. When I returned to Indianapolis, I realized the fine line between passion and obsession had been crossed. Most of my free time was now spent studying ram pictures and talking with Eric and others about each possible target ram.

In early November, I received a picture of a giant ram from Todd. I knew this was the ram we needed to target. Eric named him “Dubs” for the double chip on his passenger side horn. His bases looked huge, but previous harvest base data told me they couldn’t really be that big, or could they?

I arrived in Scottsbluff a week before the season opened to glass for Dubs. On Wednesday morning, Todd and I located him with a herd of roughly 20 ewes and 4 mature rams. We glassed him for nine hours that day as he played boss and would not let any of the other rams get close to his hot ewe. The next day was Thanksgiving, and it was my first day solo keeping tabs on him. This time alone allowed me to reflect on how grateful I was to be on this hunt as I watched Dubs and the other rams continue to fight for their ewes.

The rest of my hunting group started showing up one by one on Friday and through the weekend, which gave me confidence since we had more than just two sets of eyes on Dubs. By Sunday evening, I had watched him for a total of 45 hours over the five-day span. My confidence was high, except for that one nagging thought, “Are there enough hot ewes in the herd for Dubs to stick around until Tuesday?”

On Monday, the day before opener, Dubs was starting to become more restless and pestered by the other rams. He was still the dominant ram but looked exhausted. Mid-afternoon, my greatest fear came true when Dubs decided to take off with a hot ewe. We immediately put our packs on and went looking. Fortunately, we turned him and the ewe up after a two-hour search. We put them both to bed that night and headed back to camp with confidence that we would be high fiving one another early the next morning.

Early on Tuesday morning, we hiked to within about 1,000 yards from where we had put Dubs to bed. As the sun came up, we were able to locate the herd of ewes and rams. All of them were present and accounted for, except Dubs! He had abandoned the identifiable ewe he was with and was nowhere to be found. The team and I spent the next four hours hiking and glassing every ridge, draw, and bluff in the immediate area. Despite our efforts, we were not able to turn him up. We decided to split up so that we could cover more ground. As Todd and I were hiking back to the truck, he said, “Grant, I think you should go and check that private land four miles east where I saw him earlier in the month.” Who was I to argue with Todd, who knows these sheep better than anyone?
Fortunately, I had received permission to hunt this parcel of private land during our earlier summer scouting trip. About a mile onto the property, I located a herd of sheep and started glassing the rams. No Dubs. After a couple minutes, my friend, Jerry Blake, said, “Grant, come here. I found Dubs.” I didn’t believe him until I looked through his spotting scope. Sure enough, there was Dubs chasing two ewes.

The herd was starting to move, and we needed to come up with a game plan fast. We began to make a stalk from the south, but the terrain and wind were not in our favor. As the entire herd began to move away from us, my friend, Brendon Rosales, and I were able to sneak behind a small ridge and slowly close the shooting distance to 240 yards. My heart was pumping, and I knew that it was now or never. Dubs was pushing his hot ewe toward the herd, and my opportunity for an ethical shot would be gone once he joined it. I got into position, found Dubs in the center of my scope, and squeezed the trigger. I heard the thump and knew Dubs was hit. He ran 60 yards and stopped.

As he turned broadside, I could see the shot was eight inches too far back. I put the crosshairs on his shoulder, took another deep breath, and squeezed off another round. Dubs took two steps, stood up on his hind legs, and dropped.

I immediately let out a scream that the rest of the group heard from a mile away. All of the emotions that had been building inside over the last 10 months washed over me in an instant. I will never forget the feelings I had during my walk to this magnificent animal. I immediately realized there was no ground shrinkage. All of us had underestimated the size of his bases. Dubs was officially scored at 201 5/8" B&C net (202 4/8" gross) with base measurements of 17 6/8" and 17 4/8".

I would like to thank my wife, three children, mom, dad, and brother for always being supportive of my passion for hunting. I would also like to thank Todd Nordeen and Lauren Alfrey with the Nebraska Fish and Game Department for their dedication to the conservation of these amazing animals. Dubs is truly a once in million lifetimes ram. All of these wonderful blessings were made possible by God and my friends, Eric Bachofner, Brendon Rosales, Brad Borden, Jerry Blake, Brad Baryenbruch, Eric Reichert, Nick Lease, Tyler Komenda, Brendan Burns, and Dan Blankenship.