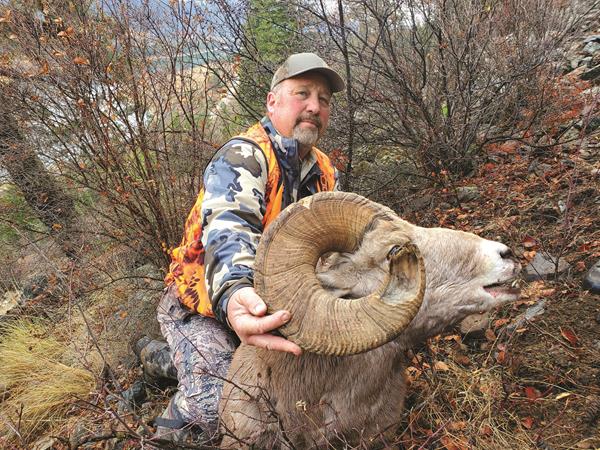 My hunting legacy began by following the guidance of my dad, older brothers, and friends, harvesting deer, elk, and moose and enjoying hunting stories retold at camp. Through the years, I added my share of harvests and stories. Two animals I longed to pursue were moose and sheep. Others had harvested these magnificent animals, and I prayed to draw tags.

It took 40+ years of patience! I started applying in the late 70s. Years turned into decades. With increasing applicants and dropping quotas, the odds diminished. I didn’t dream of trophies, I dreamed of the chance to get out, match wits, and be selective in harvesting. I’ve never considered “hunting” to be “killing.” It is spiritual. I hunt for weeks and weeks every year and harvest only when the animal is right for me.

Family and friends stayed optimistic that I’d draw. I worried I might not physically be able to make the hunt if I didn’t draw soon. Friend and sheep enthusiast Brad Borden kept saying, “This is your year, this one!” Others who cheered were my dad, my brothers, my wife, our sons, and other friends. On May 11, 2021, I checked drawing status, fully prepared for “Unsuccessful.” I was thrilled to see “Moose-Successful.” I scrolled further and felt my heart drop and doubt rise “Sheep-Successful.” I told nobody. I drove straight to Montana FWP for confirmation before permitting myself to believe that the unthinkable odds of drawing both tags on the same year had just happened.

My dad passed away six months before I read “Successful.” He definitely had a hand in making it happen. My bosses at Montana Log Homes told me to take off what I needed. Shared passion is why I’ve worked with them for 37 years.

I had my work cut out. I pored over maps and Google Earth, talked to fellow hunters and biologists, set up trail cams, and scouted. I’d hunted my moose district for nearly five decades. I could hunt it in my sleep! The sheep district was another story. I knew the area, but I’d never hunted it. Brad had successful hunts in the district, so his experience and expertise would prove to be a valuable resource. My goal wasn’t to harvest record book animals. I wanted respectable trophies, exciting stories, and to share the opportunity with my family. This was a once in-my-lifetime experience. Including my family would make it more special.

Moose season in Montana starts mid-September. By mid-August, my trail cams, scouting, and reports from others revealed nice bulls. Homework done, I was ready for the test. My wife, Laili, and I took a couple days at the end of August to scout for sheep, meet locals, and see people I’d reached out to over the phone. Over that weekend, I developed a fever and sore throat. COVID-19 came to visit. The next three weeks were miserable. With physical symptoms, I also experienced roller coaster emotions. At times, I wondered if I would take another breath, and others, if I would see another day. I would have given up my tags to get better. Thank God I didn’t have to!
While still experiencing shortness of breath, a week into moose season, I began by driving and glassing. I built stamina. During the following weeks, my son, Travis, captured a nice bull moose on video while elk hunting, and I called in several small/medium bulls. At the beginning of October, I had a sheep tag burning a hole in my pocket and knew that a sea of orange was about to hit the woods for deer and elk.

On day 16, I decided to go after the bull Travis had videoed. The morning was uneventful, and I’d started planning “Day 17.” As with most hunts, things can change in an instant, and that’s what happened on October 6th. As I headed home, I caught a brief glimpse of a bull moose through thick timber. Covid be damned, I climbed 200 yards where I set up calling. The bull came crashing in with little encouragement and stopped broadside at 100 yards. Bull down. I had one bar on my phone and placed a call to my son, Tyler. He called Travis and Laili. Before losing signal, I was able to say, “Bull down near where Travis was.” They knew where to go. They arrived, and we worked to cape, quarter, and haul the moose out. Five hours after pulling the trigger, we were headed home. A 42-year-old dream lay in the back of my truck. This was the bull Travis had on video, enriching the experience. It doesn’t get any better. Or does it? Sheep time.

Our first weekend, sheep hunting, Laili and I headed back to Thompson Falls. Brad and Huntin’ Fool Hunt Advisor Eric Bachofner met us at daylight. Eric was another valuable resource both before and during the season. His knowledge of sheep districts, quotas, ram age classes, hunter harvests, and size expectations was outstanding. We were able to spot several rams that first weekend. The very first sheep we saw was a nice ram that Laili spotted. We named him “Chip” because he had broomed off a large chunk of his right horn. This added character to the impressive old warrior. He was up high, and it was not time to pull the trigger yet.

Following that first weekend, Tyler was able to spend weekdays with me and we used his camper as base camp. We soaked up father/son time spotting sheep by day and the old man beating the boy at Cribbage by night.
With the rut setting in, we saw more rams. They had begun moving down. Brad made the hour-long drive over and back numerous times. He doesn’t have to be the tag holder to have contagious enthusiasm! I wanted to share this experience with my whole family, but they could only be there on the weekends. Odds were that the opportunity to harvest would happen without them.

Friday, November 5th started with light rain and fog; however, by early afternoon, the fog lifted and we spotted a nice ram. We planned a stalk for the next morning if we could relocate him. Travis, Laili, Odin Warriner, and his daughter, Olivia, joined the hunting party. We were glassing by daylight. We had some waiting to do. The fog was thick, particularly where the ram we’d seen on Friday was. We split up to glass where we’d previously seen rams. The fog was frustrating, but it helped keep adrenaline levels in check. I had just changed locations when Brad came skidding to a stop beside me. “We’ve found a good one,” was all he had to say to refill my adrenaline. Our hunting party kept track of the herd while we tried to get a good look at the ram. He was in and out of fairly thick timber.

I trusted Brad’s judgment. My sons and I headed out. This would turn out to be the stalk and harvest highlight of 46 years of hunting. The ram was chasing ewes, making it difficult to predict which direction they’d go next. We set up about 300 yards from where I hoped the ram would cross, well within comfortable range of my Browning X-Bolt 300WM. He did. He was chasing a smaller ram. With my boys filming and coaching over my shoulder, I took a couple good breaths, held, and shot. The next moments will forever be imprinted on my memory. The old mountain warrior went down. My son was commentating as our shared dream becoming a reality. The video shows the ram go down, and Travis says, “You smoked him, Dad. You did it!” It further shows me looking to the sky and giving my dad and God thanks. Next came hugs, tears, and feelings only a father and sons working together for a common passion know. Upon getting up to him, we realized this old warrior was Chip! With sled and ropes, our hunting party worked together, and the next hour was spent taking pictures, carefully taking him down the rockslide to a flat enough place to clean and cape him, and sharing the gratitude hunters have when they’ve worked hard and harvested clean. I really can say that it doesn’t get any better than this and that I have completed a bucket list double header.

On my way home, I stopped at my brother, Bob’s, house to share my story. I am so glad that I did. Sixteen days later, Bob passed away from a heart attack caused by Covid. I dedicate this story to Dad and Bob. Their guidance and support through the years contributed to my passion and respect for hunting. Rest in peace, Donald and Robert Komenda.

I am grateful for this opportunity and outcome. On February 4th, I fell seven feet, landing on my shoulder at work. I was transported to the ER with a broken clavicle and four broken ribs. If I had those tags to fill right now, they’d have to stay in my pocket.