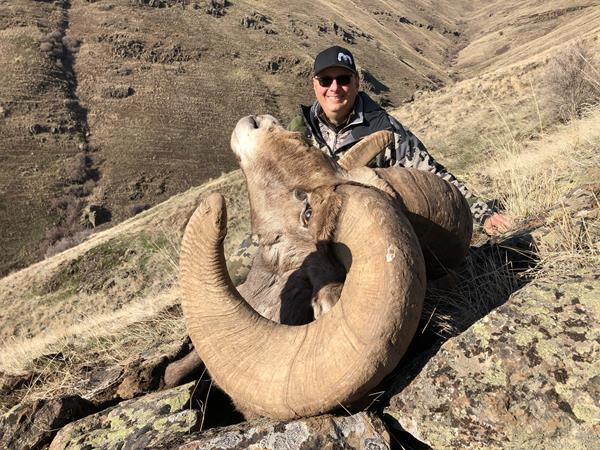 This incredible journey began on July 20th as I was working from my home office due to the pandemic restrictions. I was deep in thought on several very important projects when my cell phone rang. Seeing it was a Washington state number I didn’t recognize, I passed it off as a sales call and got back to my work. Minutes later, my screen lit up with text messages that caught my attention. The messages were from Andy Kelso from the Washington Wild Sheep Foundation asking if I was available for a call. The text ended with, “You’ll like it!” I all but forgot my work projects and dialed back as fast as humanly possible. After several rings, I heard, “Hi Gary, this is Andy Kelso. Congratulations, you have just been drawn for the 2020 Washington Rocky raffle tag!” Time stood still until I was finally able to respond with, “That’s awesome! Thank you so much for the amazing news!”

After an exciting evening, the new day dawned and I realized that even with all the trials and tribulations of the pandemic- induced year, I was going bighorn sheep hunting! As my thoughts centered on the hunt, my phone announced another Washington number. This time, I answered to hear a hearty “Congratulations!” from a great friend and tremendous sheep hunting guide and outfitter, Glen Landrus. After all the congratulatory messages and talk about big rams, Glen said that he and Bryan Bailey would love the opportunity to guide me on my bighorn hunt. I immediately agreed that Bailey & Landrus Hunting Company would guide me on this hunt-of-a- lifetime.

As the calendar turned to November 1st, Glen thought it was time for me to pack up my gear and head west by the upcoming weekend. Bags packed, my wife and I were enjoying dinner at one of our favorite restaurants Saturday evening when my cell lit up with texts, pictures, and messages with a lot of exclamation points coming from Glen. The first message read, “We found him. He’s not broken. Get here fast!”

With an early morning departure, I was hoping to be on the mountain that afternoon. Between a snowstorm in Salt Lake City causing a two-hour delay and a lost rifle that didn’t show up for two more days, my travel westward did not help the anxiety!

When I arrived in Lewiston, I was greeted by Glen who was equally as excited to start our hunt. We decided to head to the mountain to get a look at some rams before nightfall. During the drive, Glen showed me some of the amazing photos he and Bryan had taken over the last two days. This was a ram Glen had found a year ago and had hoped would make it to this season.

I was in awe as I looked at the pictures and said to him, “Glen, he has to be 44 inches long!”

Glen said, “Gary, we don’t talk about numbers like that.” His words and the smile on his face told me something very special was waiting for us on that mountain.

When we arrived, Bryan was on the mountain watching a band of rams, including our target ram, chase some ewes as the rut was on. With only an hour of daylight left, we didn’t have enough time to climb the mountain. It was the hand we were dealt. If my trusty McWhorter 7MM-STW was by my side, we surely would have made the climb.

The following morning brought with it some additional challenges as an overnight storm had covered the mountain with over a dozen inches of fresh snow. Right after daybreak, we positioned ourselves on a perch to get a look at the country where we left the rams the night before. Within 30 minutes, we located the rams about a mile from where we last saw them. The bad news was that they had made their way onto private property which was not accessible for us to hunt. We watched them feed and chase ewes all day long. As evening came, the snow continued to fall, making travel more difficult by the hour. And so, that’s how it went for the next four days, more snow and no movement towards public land by the big ram.

With my rifle finally in hand, we had one more morning to hunt before I had to leave. We didn’t locate the ram that morning, but the team would continue to scout for him until I could return on November 18th.

I was able to make it back a day earlier than expected to the news that the ram had disappeared and they hadn’t seen him for the past five days. That said, Glen remained confident we would turn them up soon. The team split up the next day as the weather was dismal with fog, rain, snow and very tough visibility. However, things began to look up when we all met after dark. The team had found some rams and ewes about six to seven miles from where we had last seen our target ram.

The next day dawned with clear skies and sunshine. The plan was to break up and hike deep into the country where the big group was spotted the day before. The weather was not the only positive for the day as the target ram was located. This was quite exciting news!

The following morning, November 20th, was crisp and clear, and our plan was to climb the mountain, hoping the ram had not moved far. After a nearly three-hour hike up the mountain, we started seeing sheep and the excitement started to build. We peeked over the rim and saw more sheep and rams chasing ewes about 1,000 yards up the canyon. Finally, there he was, fending off the other rams to protect his ewe.

Bryan quickly had us drop over the rim to start our final stalk. After all the challenges of the last 13 days, the final climb of about 700 yards went incredibly well. We popped over the rim to find a rock edge that provided great protection from the rams. We worked our way down the rim rock edge to about 350 yards, our ram across the canyon, staunchly protecting his ewe. Bryan ranged him at 311 yards after elevation adjustments as I threw my rifle up on my backpack across the rocky edge. With Bryan stating that he was slightly quartering away, I whispered I was on him and touched the trigger of my trusty sidekick, sending the 160 grain Accubond on its intended course as the ram-of-a-lifetime reared up and fell to the earth.

The high fives and excitement were like never before. We never talked about how big any of us thought this ram might be. We all just knew he was beautiful and very, very big!

When we finally got to him, he was nose and tips down in the mud, which stopped him from rolling down the mountainside. The weight of his head and horns made it difficult for me to lift them. With the needed help, we finally lifted him and saw that the sheer size and beauty of this ram were beyond belief. He grew in front of our eyes as I steadied his head. He was a world-class giant that we instantly knew was going to push the 200" mark. We marveled over this magnificent animal for hours on end. Tears were shed, emotions went unchecked, and after it all sank in, we felt this ram was not only going to push but exceed the 200" mark.

Glen’s emotions reflected a lifetime of hard work and dedication toward the conservation efforts of these incredible and majestic animals. Bryan, Andy, and Wayne were in awe and could not stop admiring the ram from every angle. I was just taking it all in – this spectacular animal, our whole team, the emotions, the ups and downs, admiring this animal, and the efforts of everyone to make it all happen. Without a doubt, this is the euphoria that makes us all keep coming back.

I would like to thank my wife, Betty, for always being supportive of my passion for hunting and the outdoors. Thank you to Glen Landrus, Bryan Bailey, Wayne Clouse, Andy Kelso, and the whole Bailey & Landrus Hunting Company team for your friendship and for making this incredible adventure possible. It turned out to be the hunt and experience of many lifetimes. Thank you as well to the Washington Wild Sheep Foundation for your commitment to the conservation of wild sheep and the programs made available to enjoy these majestic animals that we call the Rocky Mountain bighorns. Finally, a thanks goes out to KUIU for making the best hunting gear available in the market today. I am truly humbled and blessed to have enjoyed this entire experience with each of you and to have had an opportunity to hunt such a magnificent animal. My ram was officially scored at 202 4/8" B&C net with only 2/8" in deductions and is the new Washington state record. Base measurements were both over 17", with horn lengths coming in at 44 2/8" and 44 0/8". This was a truly incredible ram.