An Incalculable Series of Events 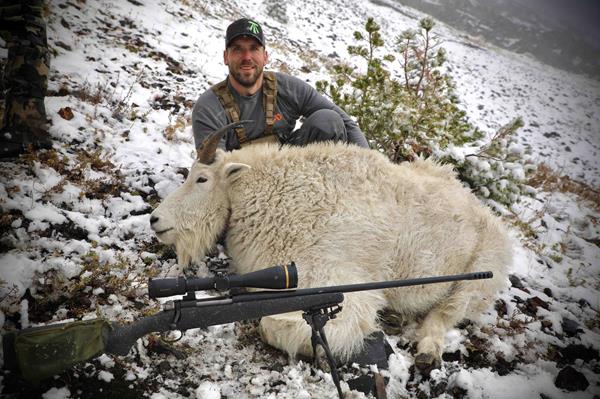 “I can’t say it was everything I hoped for because it wasn’t like anything I could have imagined,” is how I found myself describing this blur of memories my mind was still processing as I returned the anxious texts and voicemails. When I started my planning, I was hell-bent on tackling this hunt with a self-guided approach and two close, longtime friends, Mark Scoltock and Sam Haley, but we quickly realized we would be in over our heads. My tag was valid in any portion of the unit, but we’d be hard pressed to find many mountain goats outside of the Eagle Cap Wilderness boundary. Admitting we needed help and hiring a guide was probably the best decision I could have made with this kind of tag in my pocket. I got in touch with Brian Sanders of Oregon Backcountry Outfitting and knew I’d found the guy I’d been looking for. His wisdom and knowledge of the mountains, the animals they hold, and what it takes to make average guys like me successful has no comparison.

The ride in on horseback felt like I was in a dream. Every direction I looked peaks jutted vertically towards the sky, and I changed my definition of what a nasty canyon was. All the ones I would have tried to avoid back home looked like a golf course compared to this. As we rode in, I couldn’t help but smile in anticipation. Snow was being called for overnight, and the thought of looking for a white critter against a craggy backdrop now freshly dusted white seemed less than ideal, but I had bought my ticket and it was my turn to ride.

Under the watchful eyes of goats milling above camp, it was all we could do to get our bed rolls laid out while we weighed our options and pondered the possibilities of making a quick warm-up stalk before darkness fell. There was more than one billy deserving of at least a closer look. We knew time was short, but curiosity got the best of us and up the mountain we went. As the autumn sun sank behind the ridgeline, deciding not to chamber a round with a billy that most anyone would be proud of bedded just a couple hundred yards away may be one of the most difficult calls anyone should ever have to make.

The next morning was our first full day of the hunt. The weatherman had unfortunately been correct, and we woke up to about 2" of fresh snow. Talking over the game plan with Brian as we moseyed about waiting for the cloud cover to burn off, I tried to mentally prepare myself for what was to come. As my crash course had alluded to the night before, a mountain goat hunt in the Eagle Caps largely consists of climbing up a mountain as you simultaneously make peace with your personal Maker, if you haven’t done so already. We were in the middle of a vast land time had forgotten and had over 3,000 feet from camp to gain before we’d be where Brian said we needed to get to.

Before I left on this hunt, one thing I had been told in regard to choosing a big billy was, “If you have any doubt about its size, gender, or whatever, don’t shoot! You’ll know a big one when you see it.” We had spotted a couple goats during our initial ascent, but none gave me that “Whoa!” feeling and pressed on through the next layer of clouds. Brian’s intuition, honed by a lifetime in those mountains, lead us through the next pass where he spotted a bachelor herd bedded as high up on the ridge as they could get. There, for the first time, I laid eyes on not one, but two billys that made me mutter, “Whoa!” After some careful examination through the spotter, Brian gave his professional opinion – we had made it to our billy.

Sneaking into range and gaining a good vantage, we spent over an hour in 30 mph gusts while the snow continued to fall. When the weather broke, the goats started to stand and mill around. At any second, my window of opportunity would be opened. Our billy offered a quartering away shot as hard as he could have given, but I had enough faith in my rifle and its capability that that part wasn’t a concern. The rest would be on me. The moment I flicked the safety off, measurable time ceased to exist.

Leveling my crosshairs, from somewhere deep inside I heard an old familiar voice, “There’s your shot, now make it count.” There would be no warnings today. Slowly applying pressure, I waited for the trigger to surprise me, breaking like glass when it did. Standing less than 300 yards away, the time of flight was only fractions of a second, but somehow, I remember watching the bullet in flight through the scope as it found its mark. His onsetting winter coat exaggerated the impact. He reared up and backwards with a fire in his eyes that can only be sustained by a lifetime spent on these unforgiving peaks. As he reeled, that fire fizzled to a look of astonishment that he could be dethroned at the apex of his life. The last ember was snuffed out by surrender, his body no longer able to support itself. He came crashing down onto the shale, snapping me back into reality.

He was on the gentlest slope that one could ask for in that country, but as could be expected in conditions such as this, our billy started to luge down the mountain towards a series of terraced cliffs. The way it was going, he would surely end up another couple thousand feet below and at least half a crow’s mile away before he’d stop. I was already convinced just by drawing this tag I had used up every ounce of luck the universe had ever saved for me, and I was now destined to face my old adversary, Murphy with his army of laws, while I watched our billy disappear over the edge. To my surprise, there must have been one last sprinkle of good fortune up there somewhere. As the universe saw fit, he slid into the only scraggly sapling pine tree, finally coming to rest just a few big steps from the ledge.

With the longest sigh of relief I’ve ever let out, I took one last long moment to look around and take it all in, thinking back to everything that had fallen into place to bring me to this point – being raised as an outdoorsman and developing a love for anything wild, the experiences outdoors that made a permanent impression or motivated me to work towards that next benchmark, my family who supported me while I prepared and planned all summer, and pushing my mind and body beyond its fathomable limits from the moment we embarked on this journey. It was an incalculable series of events that had lead me to this moment.

I’d be lying to say I wasn’t a little disappointed by how this came to an end so quickly, yet I’m thankful for who I was able to share it with and how it all concluded. Although I was never actually in fear for my safety, every hair-raising experience in the outdoors I’ve ever had does not equate to the total number of times or frequency I had the same puckering feeling on that mountain. Brian and Randy are not human. Every step they took looked natural, and they did it without dripping a bead of sweat or needing to catch their breath. This hunt would have been a tragedy without them. I owe a huge amount of my success to those men.

Before hitting the road, we checked our goat in at the local ODFW office. Of the data collected, that is a rough B&C score. It was by no means official, but our jaws dropped when we saw the number that could potentially land him north of the B&C “All Times” minimum. Despite knowing that, I am apprehensive to have him officially scored. Considering what we went through, an arbitrary equation to come up with some magical number doesn’t really seem all that important in the end. Everyone has their own reasons for going on a hunt like this, and for me, I was after an experience, and by God, an experience is what we got.