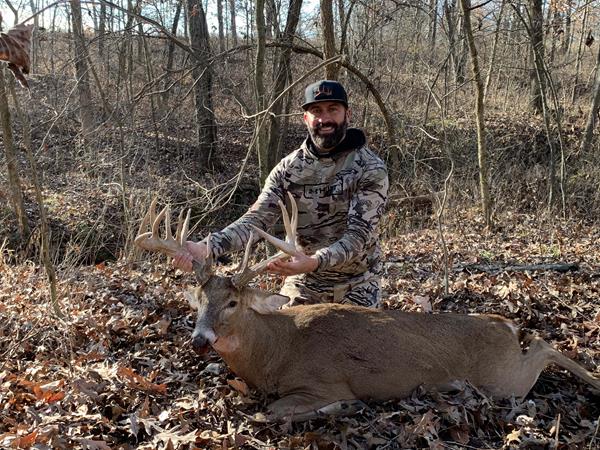 This hunt took place in Pike County, Missouri at a very close friend’s farm on December 4, 2020. I had recently lost my Grandpa Bob and was unable to attend his funeral in Michigan due to COVID restrictions. On December 3rd, I decided to go hunting in hopes of harvesting a special buck for my grandpa and my dad since I couldn’t be there for them. My close friend, Dr. Joe Kallial, had invited me up to spend time together and honor my grandpa by being out in the woods with close friends.

The morning of December 4th had a different feel to it. I got in my tree stand an hour before daylight and enjoyed sitting in peace with a full moon, no wind, and absolute silence. I was able to do a lot of thinking about this past year, my grandpa, our stories, and what it would mean to get a nice buck in his memory.

My tree stand was located in a high traffic pinch point between multiple feeding fields, and I was overlooking a small ridgeline where the deer liked to travel. At approximately 7:48, I saw movement off to the right down in the woods. I quickly grabbed my binoculars and checked the deer to see what it was. It turned out to be a doe, and after a few short seconds, I noticed more movements behind her. As I waited for the deer to appear out of the woods and onto the ridgeline, moving towards my left at about 90 yards, I could see the second deer was a nice buck. The deer were moving fast from my right to left, and I could tell that I wouldn’t have much time. After a second look at the buck through my binoculars, I could tell he was a mature buck and definitely a shooter. I started picking shooting lanes with my rangefinder to see where I may have a chance to send an arrow. The doe was in heat and moving very quickly across the top of the ridgeline. He was about to start going away from me to my left where the shot would be about 55 yards. Suddenly, the doe dropped down in the ravine and headed towards me and the buck followed. I put my rangefinder away, knowing I might have a chance to take a shot. The deer were moving very quickly, and I had to estimate how far away they were going to be as they approached. Luckily, before all this happened, I had ranged many trees to get a gauge of the distance. I knew as the doe was coming to my hard left at about 25 yards I was going to have to make this buck stop in order to get a shot. Without thought, I knew he was in range and let out a grunt to stop him. As he stopped, his left leg went forward and opened a perfect shot opportunity. I took aim, squeezed off the arrow, and hit the deer just behind the shoulder. The buck bounced a couple times and then stopped, trying to figure out what had just happened. The doe was not alerted at all, and as the buck started to trot down the path away from me, he stopped after another 30 yards and tipped over. I was in awe of what had just happened. I didn’t know exactly how nice of a buck he was, but I knew he was a good, mature shooter buck. As the buck fell over, the doe slowly walked off and I knew I put a perfect shot on this buck.

I was so excited about what had just happened. I had to text the boys to let them know, and my little brother immediately replied, “No way!” He FaceTimed me as I sat in the stand. We shared a great memory together. I told him I wasn’t exactly sure what I had shot, but he was a good 140"+ shooter buck. As my brothers and nephew were texting me to send pics, I was still in the tree stand and waiting for my dad to reply. As I sat there, another buck was coming down the same trail the doe and buck had just traveled. After the buck left, I got down to go look at my buck. I was super excited not only because I shot a good buck, but it was for my dad and my grandpa.

I got down and found my arrow, and I followed the blood trail down the path. I could see the buck right away. As I got closer, I could tell he was bigger than I had thought and this was becoming a very special moment. I approached the deer and knelt down by him in awe of what a trophy buck I had just harvested. I was full of mixed emotions about being excited to shoot my first whitetail buck in seven years, my grandpa just passing away, and not being able to be there for the funeral and for my dad. As I marveled at the buck and took pictures, I had yet to hear from my dad. I called his office and asked the front desk to please locate him so I could speak with him. My dad answered, and I told him that I needed him to FaceTime me. Within a minute, my dad and I were on the phone and I explained to him what had happened and that this buck was for him and my Grandpa Bob. I told him his name was “Booner Bob” and the buck was dedicated to Grandpa for all the memories we have with Grandpa hunting, his bucks he has killed, and the stories we have made together. This buck was extra special.

As I got back to the cabin and talked to Joe about the hunt, he was excited to see the buck. It had been on trail cam on Joe’s farm for over three years, but no one could catch up to him. Joe was very happy for me to get this buck for so many reasons. He knew my grandpa had just passed, I couldn’t be there for my dad, I was personally going through a challenging year, and it was a buck he had been hunting for over three years.

As a Christian man, I quickly realized how meaningful this buck really was. It turned out that this was the biggest buck killed in the Squires family, and it was killed the day after Grandpa had been buried. I prayed to God and Grandpa about this experience and how surreal it was. The culmination of so many different emotions, feelings, meanings, and symbolism this buck represented made it so special. The stars had aligned that morning for this to happen, and I knew my grandpa was with me.

My close friends, Joe and Andy, were there with me the entire way. I was with hunters who knew this buck was more than just a buck. It brought us closer together as friends, it allowed me to feel closer with my grandpa, and it allowed me to have a special father and son moment about life, God, and family. Joe and Andy scored the buck unofficially at 180 1/8". Rest in peace, Grandpa!