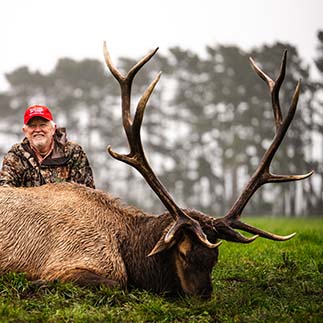 It’s ironic that for over 30 years my family had put in for tags all over the country, dreaming of that premium elk tag. When my father, Tony (79 years young), told me his elk hunting days were limited and he thought about not applying for elk anymore, my heart sank. About a month prior, my brother and I went looking at the local elk herd and shared it with our relatives from Arkansas. We laughed about applying for elk in our backyard for over 30 years and how the odds were so bad and now Dad thought about not applying.

The 2020 California draw came and went with the same results as the past – Unsuccessful. Dad had max points for deer, elk, and sheep in California and still hadn’t drawn. One more chance at a 2020 tag was through the raffle. Reviewing the California raffle tags, I saw that the local elk herd had more tags in 2020 than ever before. This year, they were going to take 38 elk from the herd, but only two hunts would be for the biggest bulls. I talked with my brother and decided the worst odds would be the unlimited bull, but even if you got a 6-point, it would be a super hunt! Fast forward to July 29th when the California elk raffle tags were posted. I took a break from work and went to the CA F&G webpage and typed in my ID. Unsuccessful. Then, I typed in my son’s ID. Unsuccessful. My daughter’s ID. Unsuccessful. My brother’s ID. Unsuccessful. My father’s ID. Successful! I told my kids that we had to call Papa and tell him. I picked up the phone and called my dad. I asked how he was and what it felt like to win the lotto. At first, he didn’t know what I meant, so I told him he drew the unlimited Roosevelt elk hunt in his backyard! After I hung up with Dad, I called my brother. I knew he would think something was wrong with me calling him during the workday, but I just couldn’t help myself. When I told him Dad had the unlimited tag, he freaked out. The best part about this was that one of my brother’s friends manages one of the big ranches in that area and he told him if we got a tag he would help us out. Five more phone calls later, we had our team set up.

For the next four months, my brother and my dad looked at elk several times a week, including me in the scout by sending Phone Skope pictures and video. We compiled a list of bull after bull. Narrowing down a top 10 list of bulls, we knew that, most likely, five of the bulls would be taken out prior to our hunt. The list was set, and bulls were named.

The first PLM hunter took bull #1 “22 Sec. Bull” at the end of August. The second PLM hunter took bull #2 “Crazy 8” a few weeks later. Then, three hunters came in and bull #7 “6x6 Swoop” was off the list. Now it was our turn. About four weeks prior to my dad’s hunt, my brother called and asked me to guess what he was looking at. Excitedly, I said, “Uncle Bill’s Bull?” He said, “Yes!”

This bull had been missing since the rut ended in late September, and now he was back. He was our #1 bull left on the list, and now all we needed was for him stick to around. For two weeks, we saw him every other day or so, and then just like he did before, he was gone. Then, out of the blue, a new 7x7 showed up. He was nice, but we could tell he was young. We debated many times that the 7x7 would be hard to pass, but he wasn’t on the property where we could hunt. However, some days he would be within a few hundred yards of the boundary and we could only hope it might work out.

As the hunt day got closer, I checked my gear and packed the truck for the trip north. When I showed up, my brother told me if we could not relocate Uncle Bill’s Bull, the next best bull was “Handlebars.” My brother kept telling me that he was 350", and I told him I just couldn’t get him to score that high. I estimated him at 330", but for a Roosevelt bull, that was a stud. The first time I saw Handlebars in person, I could tell he was a massive bull. There was only one issue. Handlebars had moved onto a small piece of property not in the hunt zone. Two days to the hunt, I was sitting with my dad asking what bull he liked, and he said he was torn. He thought he would take a non-typical or 7x7 on this hunt, but not finding Uncle Bill’s Bull yet left him with the thought of shooting a younger 7x7 or going for the older 6x6.
The following morning as the sun was coming up, I found another 7x7 bull. He was nice but once again just out of the hunt zone. After a short photo shoot, we moved on to see what else we could find. We found two groups of bulls and looked them over with a fine-tooth comb. We viewed over 50 bulls that day, but we still couldn’t find Uncle Bill’s Bull. Now, it was decision time. We broke the list down to the top three bulls – Handlebars, the new 7x7, and High Tops.
The day prior to season, my friend, Justin Geike, showed up to film and photograph the hunt. We talked about not being able to find Uncle Bill’s Bull and that the top three were all super bulls. Handlebars had to be our #1 since he moved into the hunt zone and because his body was so big.

Opening morning was upon us, and we were split into two different groups to cover as much of the hunt zone as possible. Handlebars had moved off the hunt property, but not too far, and we were sure he would work his way back at any time. The early morning fog had us in a holding pattern. The thick mist rolled in, and it started to rain a little. When that happened, the fog started to lift. There he was. Handlebars and about 80 cows along with a few small bulls were working their way towards the hunt zone. Just as I was getting Dad set up for a shot, they spooked and started to jump the fence. Handlebars was moving in and out of his herd of cows and making it very difficult to get a shot. They started working further and further away from us. At one point, I decided we needed to move around to the other side of the property to see if we could cut them off. Just then, my brother pointed out where he thought they would come out of the trees, and sure enough, there they were. Knowing the daily elk pattern paid off as we got settled onto the trigger sticks. I hit the rangefinder and told Dad 160 yards. The rifle roared, and I knew it was a solid hit, but just for insurance, I said to hit him again. As the second bullet hit, I saw the bull start to tip and he was down for good.
When the bull hit the ground, I gave my dad a big hug and said, “Congrats! You did it!”

He looked at me and said, “After 30+ years of applying, I just didn’t think I would live long enough to get this chance. With all of you boys helping, I did it!”

My phone rang in my pocket, and my brother said he was on his way to us. He was able to watch the whole thing happen from the other side of the property. My brother pulled up and got out of the truck, and he and my dad embraced and both started crying. Most people wouldn’t understand what an emotional roller coaster a hunt that you have been thinking about for over 30 years does to grown men.

As we got closer to the bull, he kept getting bigger and bigger. With a big smile, my brother looked at me and said, “I told you he was big!” After an official 60-day drying period, Handlebars scored 348 7/8" gross and netted 343 0/8" Boone and Crockett.

This hunt wouldn’t have happened without some great help from great friends and property owners. I want to thank Blake, Billy, Brent, Kristian, Chris, Justin, Wyatt, Amber, my brother, Ron, and my father, Tony Quick. Without Dad’s direction and guidance, we wouldn’t be the men we are. He was the teacher who gave us the drive to hunt to feed our families and respect the outdoors.

Huntin’ Fool taught me years ago that if your name isn’t in the hat, you can’t draw the tag. You have to keep applying. Sooner or later, maybe it will be your turn.