Be Patient, Never Give Up, and Trust in God 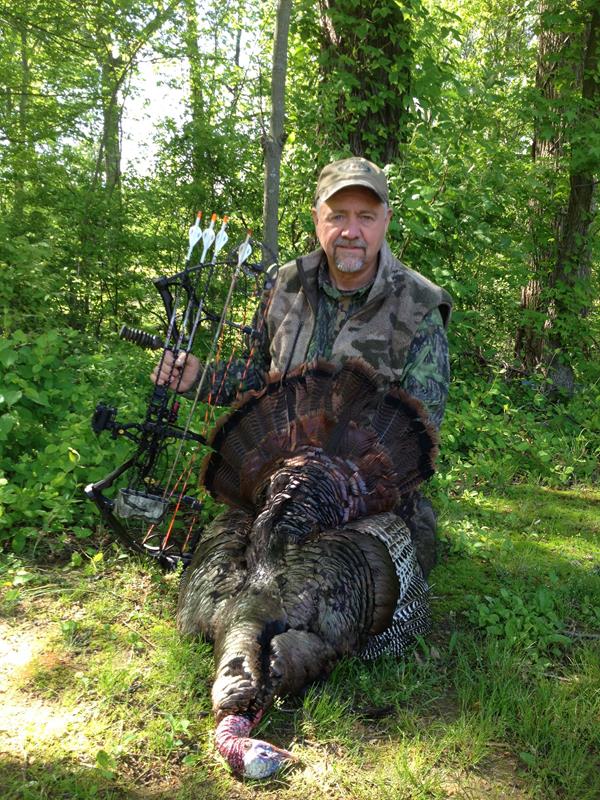 What a great year this has been. Turning 62 and preparing to retire after 40+ years can be a challenging time, but with the right mindset, it can be a time of new adventure, a lot of fun, and with a joyful spirit, appreciating even more this life that we have while here on Earth. These golden years can be truly fantastic if we choose to wake each day with a new dream to dream. At this twilight time in lives, our reflections and stories do not have to outweigh our dreams. I have a couple of stories (dreams come true) to share.

Thanks to a partnership with 3Js Archery in Mechanicsville, Maryland, I am honored to try out a new Bear bow each year. The 2013 bow was a black model Bear Empire set at 60 lbs. with a 28.5 inch draw. After a quick bow setup in the spring and guiding a 12-year-old JAKES member of the Southern Maryland NWTF Chapter on a successful turkey hunt on youth day, I was fortunate enough to harvest a double bearded (10.5” and 7” ) 21 lb. mature tom with the Bear Empire and Easton FMJ arrows. I listened to my lifelong best friend, Pat Langley, telling me to use Zwicky Judo springs behind the broadheads to keep the arrows from a complete pass-through. The spring gobbler expired within just a few yards. It was a wonderful feeling of success on a warm, sunshine-filled, spring southern Maryland day. Thank you, Lord!

As the long, hot summer days grew shorter and cooler, the dreams of bugling elk woke me up each night with great anticipation. Finally, the annual trip to Colorado became a reality in mid-September. I was off to the Rockies for a couple of weeks of hunting mixed in with assisting our longtime friends and outfitters Warren and Eric Bruton of Mesa, Colorado at their archery camp. The weather had been poor at archery camp with heavy rains during the entire second half of September. The elk rut had just started, and it seemed Pat and I had brought heavy winds combined with the daily rains.

The third and fourth weeks of archery camp in Colorado can range from 90 degrees of hot and dry weather to below freezing temps and heavy snows. We had it all. We had some hunting success with hunters from Michigan, Maryland, and a 29-year-old gal from Oklahoma from a group called Babes, Broadheads, and Bullets. After several long days of watching chipmunks and stellar jays and the aspens (quakies) weaving back and forth in heavy winds with very little elk activity, the Lord blessed me with a hunt-of-a-lifetime and a dream come true.

On September 19th, the moon was full and I was actually scouting hard for the next morning, not expecting the day to end as it did. On an evening stand with light south winds in my face and just half a mile east from my friend, Pat, the gold colored aspens and dark green spruce woods began to come alive. Within the first hour, a spike bull in full velvet stopped within 15 yards to mark his territory and walk the same path that I had just came in on. Although I was scent covered to the hilt, an elk’s nose is his superior defense, and once he hit my trail, crossing my scent, he returned quickly to the thicket where he had come from. That was neat, but I sure wished he had four points.

With the wind still in my face, a branch antlered satellite bull came down off the mountain into another spruce and willow thicket to my right (west side). I heard the sounds of cattle within a few hundred yards in the same direction and hoped they didn’t come my way. While elk and cattle use the same area, I never liked being surrounded by cattle while hunting in the Rockies. Within a few minutes, I noticed movement to the east (my left), which turned out to be four mule deer does. I had a deer tag and later discovered that I was fortunate they were all does. A large cow elk ran from the spruce thicket to my right, and it didn’t come to mind at that time that a small herd of elk were passing through the area. Then, what I thought to be an angus steer coming out of the same thicket the cow elk had run into, turned out to be a large black bear. I was at 36 yards and easily in bow range but with no bear tag. It was just another page in this exciting evening.

It was now prime time, 7:00 p.m. With the last few minutes of light and the full moon, I thought I had already had a blessed evening. Then, there was a slight shift of wind from south to southwest and a challenging bugle directly above me at about 80 yards. A very nice branch antlered bull was gazing my way as he was obviously looking for something. That eighth sense kicked in, which is only known to us hunters. With the recent shift of winds, I turned slightly to see and hear a magnificent 6x6 bull running, with his antlers nearly touching his rear end, coming directly past me within 10 yards. I had no time to think, but I picked a spot quartering away at about 11-12 yards and released. The arrow disappeared entirely, and the bull turned quickly and ran the same path that he come in on, crossing a small mountain stream behind me and to my right. I lowered my bow and thanked God for what had just happened. With a prayer of conviction, I pleaded to the Lord to make this dream come true with a quick and merciful death. Then, that slight doubt set in; we have all had it. Did I really see the good hit, and would I recover this beautiful bull elk? On the edge of dark and with one last prayer for the Lord’s guidance, I started that walk to the location of the shot. There was no arrow to be found and no blood. Dang! With a flashlight in hand and a dream in my heart, I crossed the stream to where the bull had made a turn up the hill. Fresh blood filled his left footprint, and then there was heavy, dark red blood that a blind man could follow.

Hopes were now bursting my gut, and within just 75 yards and with enough remaining light to see an opening, there was a giant of a bull lying with his antlers reaching out above his beautiful, tan colored, massive body. Walking up to this animal, I realized I had just harvested an elk-of-a-lifetime. For a 62-year-old country boy, it certainly was a gift from God. After meeting up with Pat and going to camp for dinner, we returned to field dress and haul the bull back to camp. The arrow had clipped the liver, lung, and centered through the heart, exiting a few inches out through the brisket, all resulting in a very quick kill.

After sharing the story with Pat, we both realized that we now had another life experience to share as we grow even older together. Although we were half a mile or so apart hunting that evening, we both heard the last sounds of the bull as he took his last breaths. He even struggled to give out a few light bugle sounds as if he were challenging the others with his last breath. What an evening, a dream come true, and a blessing from the Lord.

As mentioned, the equipment used was a 2013 Bear Empire bow set at 60 lbs., Easton full metal jacket arrows, and 125 grain Muzzy Phantom broadheads. I would like to challenge all hunters to continue to dream, be patient, and never give up. Don’t be surprised when a dream comes true and the Lord blesses you with an experience, a memory for a lifetime, and when He does, share it with a friend.

12 Anyone who meets a testing challenge head-on and manages to stick it out is mighty fortunate. For such persons loyally in love with God, the reward is life and more life.