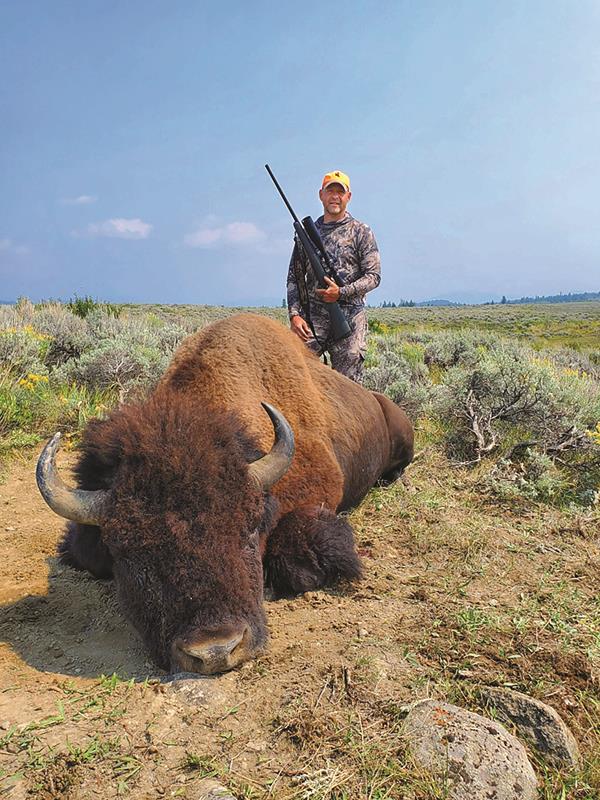 It was late May and we had just finished branding calves at my in-laws’ ranch in the southern end of the Bighorn Mountains in Wyoming. As is tradition, everyone had gathered for a big meal at the house, and I started talking to the hired man at the place, Talon Barry. He and I had spent a fair amount of time together over the last few years, and I’ve come to look on him as a friend. As we talked, Talon started telling me about a bear bait he’d been running on the slope of the mountain for several years. He said he’d had one giant boar coming in consistently every afternoon. Talon went on to say that he had had someone lined up to come and hunt the bear for a couple years, but the hunter was never able to come when the bear was there. He asked if I had a bear tag and if I was interested in hunting the bear. “Yes and yes!” I replied.

About half an hour later, we were headed up the slope to the bear bait. A good friend of mine who had shown up to help out at the branding, Dean Calder, decided to come along for the ride as well. On the way up, Talon started showing us pictures of the bear. He was a stone-cold giant for a Wyoming black bear. As we drew closer to the bait site, the clouds started rolling in over the top of the mountain.

They grew darker and darker. We crawled into the ground blind that Talon had set up and sat for a while. The longer we sat, the worse the visibility. Eventually, it got to the point where we could not even see more than 20 feet, so we decided to back out.

The next morning, Talon went to load the bait and check his cameras. Sure enough, the big boar had come in while we were sitting there, we just couldn’t see him. That afternoon, Talon and I headed back up the mountain to give it another run. This time, it didn’t take long. We sat in the blind for about 25 minutes and then Talon whacked me on the outside of my knee. “There he is!” Talon whispered excitedly. I looked up and there was a big oval-shaped blob waddling across the ridge on the other side of the canyon. I pulled up my trusty .257 Weatherby, centered the crosshairs on his vitals, and squeezed. The shot took out his front left shoulder and both lungs. He scrambled to the nearest tree and tried to scamper up, but he couldn’t. Another round downrange and it was all over for the big boar.

Talon and I walked carefully to the other side of the canyon and found the bear. He was as magnificent as Talon had said he would be. We skinned him out and headed down the mountain. On the way down, Talon told me about all of his recent elk hunting adventures. As it turned out, in the fall, he supplements his income by guiding for G4 Outfitters in Wyoming. He told me about how he and his crew had been taking really big archery bull elk and suggested I put in for their area. I still had time to change my application, so I took a change and once again trusted in Talon.

Where I live and work, the day that draw results are published is like Christmas for grown men. Text messages start flying, and everyone is either thrilled and bragging or heartbroken and envious. I started getting texts, so I went ahead and checked my results. The Good Lord and the Wyoming Game and Fish had blessed me generously! Not only had I drawn the elk tag, but I had also drawn a deer tag that I’d been applying for five years for and a bull bison tag. I was going to have a busy fall.

I contacted Talon to let him know that I had drawn and made arrangements to hunt with him, but first, I was going to have to try to find a free-range Wyoming bison. For the bison hunt, I enlisted the help of my good friend, incredibly accomplished hunter, and over-the-top skilled outdoorsman Rowdy Anderson.

He explained that the time to go kill a bison is at the beginning of the season rather than waiting for the snow to fly. Early season, there’s a chance to find an old bull that has been run off by the younger bulls during the rut. He also knew just where we were going to find said bull.

For this hunt, we needed a crew, and I had Rowdy, Dean, and Dax McCarty. Dax is a good friend and the outfitter at Wagonhound Land and Livestock. The dude lives hunting all day, every day.

We began our hunt on August 23rd outside of Jackson, Wyoming. Rowdy took Dean and me for a seven-mile “warmup” while Dax glassed from below. Sure enough, Dax found a bull that he thought might be off the Grand Teton National Park. We went back the next morning to see if we could find him again, and there were hundreds of bison. We drove around to where we had been the day before and began the three and a half-mile walk to where we thought the bison was. As we crested that last little hill before hitting the park boundary, Dax gave the universal “get down” signal and everyone hit the dirt. He started pointing to the park line. Sure enough, somewhere very close to the line was a big, hooked bison horn sticking up out of the sagebrush. I really wanted to take my bison with a bow, but I also didn’t want to eat the tag. I was packing both my bow and a .300 Win. As we assessed the situation, it became clear that the bull was very close to the park line. I ranged the bison at 247 yards, and the park line was showing 261 yards away on my GPS. Perfect! With the bison that close to the line, I knew it was a bad idea to make an attempt with my bow. I handed Dean the bow and took my rifle from him. When the bull stood up, he looked like a big black Volkswagen! It took three well-placed rounds in the boiler room and one in the point of each shoulder to ultimately bring the beast down. He dropped right in his bed. Rowdy’s plan had worked flawlessly.

We took pictures and celebrated, and then Dax went to work. He had the whole thing broken down and caped in under 90 minutes. We had called an outfitter from over the ridge to bring in horses to pack the quarters and hide out. They arrived right on time. My bison was cooling in a refrigerator less than three hours after I killed him.

When the time finally came for my elk hunt with Talon, I showed up to camp the afternoon before my hunt was supposed to begin. Talon and I headed out that afternoon just to see what was around. I threw my bow in, just in case. He drove me to one of his favorite spots and parked. We got out of the truck and walked to a wallow that had clearly been getting hit hard. We cleared out a little blind in a cedar tree and cut in some backward shooting lanes. We sat for about an hour, and a group of six spikes came to the wallow. They were fun to watch, and I practiced coming to full draw.

A little later, the big boys started screaming. There was one particular growler over the bald knob to my right. Every time he growled, I told Talon, “That’s the one I want!” Suddenly, another big bull let out a bugle in the tress immediately behind our makeshift blind. He came out at about 60 yards and was a dandy bull. We guessed him at about 340", but I was there for a monster. The 340" walked around to our left and let out a bugle. The growler came in on a string. I watched as his ivory tips crested the ridge, and I tapped Talon on the knee and said, “The big boy is coming,” and pointed to the bull. I nocked my arrow and waited about 30 seconds. The big boy came running across in front of us at 8 yards. He ran toward the smaller bull, and Talon cow called. The big boy stopped in his tracks. I didn’t have a shooting lane, so I had to get up on my tiptoes to clear limbs. I asked the range, and Talon said 42 yards. I put my 40-yard pin on the bull’s ticker and touched my release. I couldn’t see the arrow fly because of the limbs in my way, but I heard Talon say, “Perfect shot!” The bull ran about 80 yards and tipped over within view.

Fast forward to the first week in October. I had drawn a deer tag near the Colorado border that I’d been trying to draw for five years. For this hunt, I would be rolling with a true mule deer connoisseur, Jason Burke.

We spent the first two days of the hunt at Jason’s favorite honey holes. While we saw several nice bucks, we just didn’t see what I was looking for. After putting a bachelor group of bucks to bed the second night, Jason started flipping through the pictures on his phone. He pulled up pictures of a big deer he had been watching all summer but said that no one had seen it since August 15th. I wanted to go look for that deer.

The next morning, we were up well before daylight and in position to glass the pasture near the row of trees where the deer had been all summer. The sun came up, but there were no deer. We drove to the other end of the pasture and glassed back the way we had come. Jason spotted a group of deer in the meadows where we could not hunt. He wanted to get a closer look, so we drove down a road that ran along the edge of the tree row. Jason stopped to look at the deer in the meadow. As he was looking out his window, I looked out mine and saw a giant mule deer staring back at me. He was less than 10 yards away. I tapped Jason on the knee and said, “Is that him?” He said it was and I’d better get out and shoot him. I slowly opened the door and slipped out of the truck. Incredibly, the big ol’ bruiser didn’t blow out. He turned broadside and started to walk. I filled my scope up with fur, put the crosshairs where I figured they needed to be, and let him have it. The shot was true, and it was all over before either of us even knew what had just happened.

Needless to say, 2021 was an awfully special year for me. It was all made possible by the Good Lord, good friends, and the Wyoming Game and Fish.