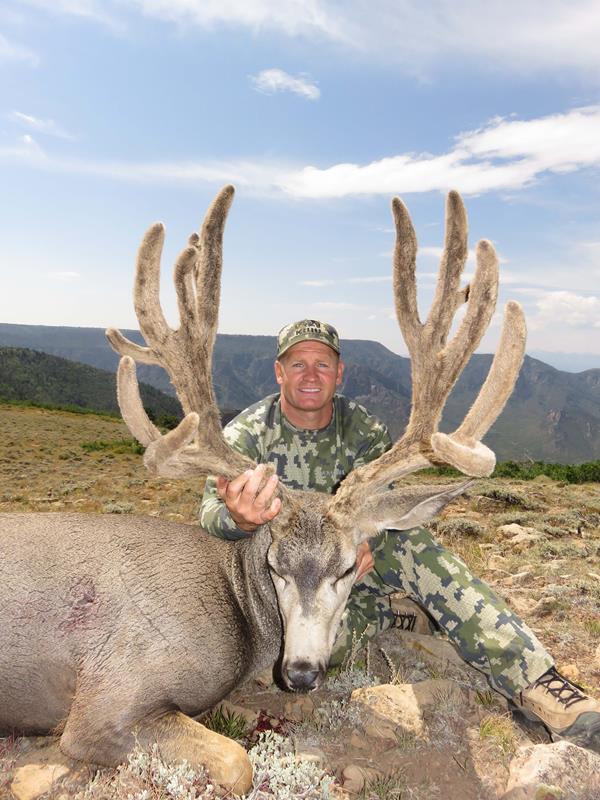 During his prime, Arnold was the greatest of his kind. The king in his sport, he was one of the greatest body builders of all time and possibly bodybuilding’s biggest icon. He won his first Mr. Universe title at the age of 20 and a total of seven Mr. Universe titles. The monster of a deer I was after, now nicknamed “Arnold,” seemed to rival his predecessor in his mass, bulk, and impressiveness. He was truly the king of our sport for this season.

Late July was the first scouting trip to our area when our guide, Dave Anderson, with Buck Basin Outfitters and his son, Morgan, first located this unique monster. Morgan properly named this unique deer Arnold. They found a few other potential shooters and sent me some photos while I was on a fishing trip in Alaska. Needless to say, my contentment in fishing diminished for a few days as I drooled over the flashy photos, knowing this was only late July and there was still time for some unknown finishing touches that could be developed on Arnold’s frame.

Two weeks later in mid-August, we made our first scouting trip as a family out to the high plateaus of Colorado. My wife, Kim, my daughter, Savanna, and I were anxious to see if we could pick up the bucks Dave had previously scouted out. We were encouraged in finding several new potential shooters but most fortunate at last light when we ran into Arnold. Eagle Eye Dave was quick to point out several new nubs and small tines that were branching off his back tines. The additional time had blossomed his overall frame but still left us wondering how much more he might add in the last two weeks of August. We were able to collect some great Phone Skope footage of him as the light that night soon faded into darkness. We each felt privileged to witness something so unimaginable with his impressive size. We were only able to locate this monster on one occurrence on this trip, so we were left wondering if we would even have the chance to hunt him.

Opening weekend of the archery season finally arrived. Friday evening, we cautiously canvassed each of the areas where we had previously seen bucks from our scouting trip and picked up several of them. We would have been content pursuing them, except we knew of Arnold. The night wasn’t uneventful, but we weren’t able to pick up our desired buck. We collected a few SD cards from trail cameras and found one picture of Arnold with one other small buck. Unable to locate him now, we wondered if he had relocated to another hillside or even moved out of the area. With doubts looming that night on his whereabouts, we knew we had to be determined and stick with the area where we had last seen him two times prior. We believed he might have moved a little further off into a small bowl hidden from our views on our scouting trips. This would be our starting point for opening morning.

As daylight ensued, we picked our way through some pines and aspens, trying to reach a small, quiet sagebrush bowl we thought he might be hiding in. As we reached the edge of the trees, Dave picked up on a small buck feeding. Within a few seconds, Dave said it was the small buck that was in the trail cam photo with Arnold. In a few more seconds, he spotted Arnold feeding a short distance behind the small buck. We were only 100 yards from them at the edge of the trees. Dave took a look at them and said to go get him.

As I crawled to them through the tall sagebrush and buck brush, they would feed off just as quick. For 45 minutes, we played cat and mouse. I did get to within 40 yards of them on our first stalk, but they joined up with a bigger group of bachelor bucks. With many eyes and tall brush, I didn’t feel comfortable standing up and spooking them all off on our first attempt. This would become a game of patience between us and Arnold. I felt content closing in on this distance on our first attempt but knew it wouldn’t be an easy task to complete.

The next few days proved to be even more challenging. My brother, Aaron Wallace, came along on the hunt to be a spotter, but he quickly became caught up watching several bears feed on a dead cow. He would come back to camp each time with more bear footage but no sighting of our trophy deer. We kept mixing things up, and Aaron was finally able to get eyes on Arnold. This bachelor herd of bucks would stay together and feed both morning and night for the next few days, making it hard to close in on Arnold. Each time we made a game plan, they did something completely different. Aaron had to head back home for work, and we continued our pursuit.

On the morning of day four, we weren’t able to locate Arnold, so we decided to drive down a different road and look around. As we came down a narrow canyon, we spotted a large, typical 4x4 buck that had paired up with Arnold. This time, they were the only two bucks together. Arnold spotted us and bedded in a small ravine. I quickly hopped out of the vehicle with my bow in hand, and Dave kept on driving, keeping him distracted while I started my stalk. I crossed through a small creek bottom and then pulled off my shoes. I climbed up the hillside to a white rock we had picked out as a line of elevation where Arnold was bedded. I looked slightly downhill, and there stood a nice bull elk feeding near the bottom. I felt jinxed, worried that if I bumped the bull he would bump the two bucks I was moving in on.

I reached the rock and thought I was close in elevation, but I couldn’t locate the two bucks. The bull slowly fed off, but not without alerting the two bucks. I crept closer to the ravine but could not get a visual on them. As I slowly moved closer to the deer, their sixth sense told them to move on and they slowly trotted uphill. I was excited again for seemingly getting so close but still had no chance for a shot.

The pressure was now imminent with only two days left. Each prior planning session proved to be a guessing game where the prowess of a mature mountain monarch would outwit us. This morning would start out the same but prove to have a different ending. I started out in the small bowl where we had our most frequent sightings. Several bucks were still feeding there but not the giant. We covered the entire bowl, and as we thought the morning was near its end, Dave located Arnold in the bottom of the ravine we had seen him in before only further down. This time, Arnold made a fatal mistake. He again laid down in some cover, believing he wouldn’t be spotted. What he didn’t know was that I was stalking in from his back side. As I closed in on 100 yards, I slipped off my shoes and began creeping down the hillside.

After 30 minutes of slowly sliding downhill, I was in position and released an arrow while he was bedded and quartering away. It hit the mark, and Arnold slowly but stunned stood up. He slowly walked to my left, which gave me a chance to nock another arrow and quickly release it, passing through mid-chest and punching through both lungs. Shaking in disbelief, I knew we had finally landed this monster-of-a-lifetime. He made it only a few yards further and fell over.

We walked up to him in awe and spent the next hour pretending we were the paparazzi. Our final tally left us each surprised. He was a 6x7 measuring in at 226 6/8". This will undoubtedly be a tough trophy to top. Just as Arnold had landed his multiple trophies in bodybuilding, I had landed a special one of my own in hunting, only with special credit given to a great friend and guide. Achievements like this are seldom accomplished on your own. Thanks also to Morgan, Dave’s son, for picking a more than fitting name.