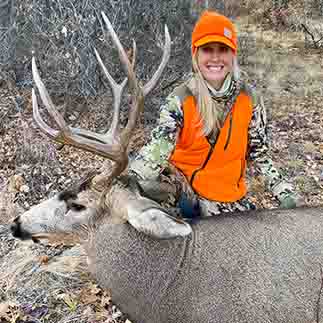 When I drew a Colorado third season rifle mule deer tag for 2021, I knew I had an opportunity for something special. Colorado moved the hunting seasons back a week, which meant third season would be going when the rut kicked off. I knew I had to take advantage of the chance at a large mulie. The season started, and we were glassing up bucks first thing in the morning. We took our time to analyze each one and carefully look over their features.

Day after day, we consistently found deer, but not to the quality I was after. At one point, I was glassing a group of deer below me and heard crashing from behind me. To my surprise, I was staring face to face with a nice 4x4 buck at 15 yards. He didn’t quite know what to make of me, so he stared shortly and continued grazing down the hill. Standing broadside at 80 yards, I had a perfect opportunity but decided to pass. I could tell he was young, and I was looking for a more mature, older buck. I watched him move along and disappear into the brush.

After several days, we decided to relocate to a new area. We got to a ridge early one afternoon and started glassing. After several hours of no movement, we finally started seeing some activity. We spotted a group of deer about a mile away, and with an excited voice, my husband said, “There’s a shooter! We have to move right now!” We quickly packed up all of our gear and started running down the ridge. We had two large meadows to cross as well as another ridge. We quickly worked our way over and slowed down in a small grove of trees between us and the deer. Using the trees as cover, we slowly crept closer. Just as the deer came into sight, we heard “Boom!” The crack of another hunter’s rifle filled the basin, and my heart sank. The buck we were chasing had been shot, but that’s public land hunting. Everyone has the same opportunity. We slowly walked back to the truck, feeling defeated.

As we got back to camp, I received a message from my dad asking if he could join us the next day to hunt. He was very excited. It had been nearly 40 years since he had been out big game hunting. With a few days left in the season, we had him meet us at camp and explained the game plan for the next day.

The morning rolled around, and we were set up to glass well before shooting light. The freezing temperatures made it almost unbearable to sit and wait. At sunrise, we started seeing promising movement. There were a couple forkies and 3x3s scattered throughout the does but still not what I was after. I decided we needed to relocate to different country. As we worked our way over a ridge, we suddenly all stopped and stared into a northern face of dark timber. There was something unique about the top of the sagebrush. As I pulled up my binoculars to get a better look, I was filled with excitement. Hiding all but his face behind the brush was a buck bedded in the shadows. This was the type of buck I’d been looking for. I slowly settled my rifle but didn’t have an ethical shot opportunity with the way he was bedded. After what felt like an eternity, he slowly stood up out of his bed, although much calmer than I expected with us only 72 yards away. I watched through my riflescope as he stretched his legs and turned broadside. I slowly squeezed the trigger and dropped him where he stood. Having my father there by my side as I filled my tag on that beautiful, mature mule deer is a memory I will cherish forever.