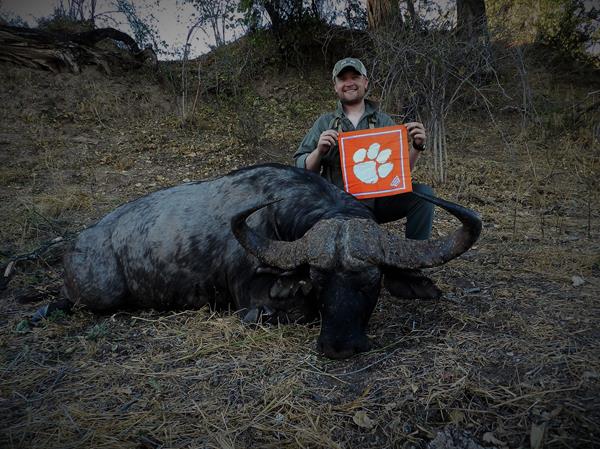 This was my first African trip, and I was hunting with Mokore Safaris. I chose Mokore Safaris after meeting PH Gary Duckworth at Dallas Safari Club a few years ago. I kept in touch with Gary over the years prior to my trip via email, and I would have to say that he is one of the most professional and respectable men I have ever met. That fact right there sold me. After a 16-hour long flight, I was ready to get to the Sengwa Research Area hunting camp along the Sengwa River in Zimbabwe.

I did quite a lot of research on hunting African dangerous game and plains game before my travels. I am the kind of guy who always likes to be prepared and know what he’s getting into prior to anything actually happening. I found one tidbit of information that was ubiquitous throughout all of my reading, and that is that African animals are tough. Not necessarily tough as in the actual process of hunting them, more of the fact that they can take a perfect shot and still run forever. I don’t speak for all Americans by any means, but I am used to whitetail deer hunting, and for the most part, a great shot on a whitetail will drop it in its tracks. Everything I read before my trip said to not expect this same result when hunting in Africa. Knowing this helped me choose which rifles I should take on the trip.

My goal was to hunt both dangerous and plains game. For my Black Death hunt, I chose the largest caliber in my gun safe, the .416 Weatherby Magnum. Shooting both Conley Precision Cartridge 400 grain soft points and 400 grain solids, this rifle would be perfect for Cape buffalo. For my larger plains game hunts, I chose my .300 Weatherby Magnum. Shooting a 180 grain Nosler Accubond bullet, this would be absolutely perfect for kudu and waterbuck. Finally, for my smaller plains game hunts, I chose to shoot my Tikka 7mm-08 Remington rifle. This rifle is my go-to rifle back in the States for most game, shooting a Norma Ammunition 156 grain Oryx bullet and would be amazing for impala and bushbuck. Some of this might seem like overkill to you, but like I said earlier, these animals are tough and I wanted as much of a clean, humane kill as humanly possible.

My first hunt was for buffalo. Since this is a very hard species to hunt and stalk, it’s wise (if your PH doesn’t already do it for you) to have this hunt be your first. This gives you ample time to find the big dagga boy you’ve been waiting for your whole life. I was lucky enough to shoot my Cape buffalo on the evening of my second full day of hunting. After a lot of belly crawling, we had a big herd in front of us with about 60 head. My PH asked if I saw the gray-colored bull, facing right. I nodded. “Take him when ready.” With my first shot, I shot the 400 grain soft point from sticks at about 45 meters away. The shot was great, exactly where I was told to hit the animal. I immediately reloaded. It was time to put a 400 grain solid in him too. Without further ado, he took off with the herd before I could get another shot. I put the safety back on; now it was time to run after him. The buffalo ran roughly 120 meters. The herd turned 90 degrees and headed to the right. My buffalo turned in the opposite direction and left the herd. I ran about 100 meters and had about a 20 meter shot on a moving target. I braced against a tree and let my second shot ring out. “Another great shot,” PH Gary Duckworth said. The buffalo walked about 20 more meters and gave the sign that I read so much about during my research before the trip: the death bellow. It’s quite a hauntingly eerie sound, but it was music to my ears. My dangerous game hunt was complete. He may not be the oldest or biggest bull, but the adventure and memories of such a rigorous stalk for Black Death will rank, in my book at least, with any giant, world-record bulls. There was definitely not any ground shrinkage with this one. He ended up scoring SCI 110". I’ll take it all day long.

Just to prove how tough these animals are, I have a little anecdote for you about my buffalo. Back at camp, the skinners asked if I would like to get my bullets back as memorabilia of my successful hunt. Of course I said yes! I was handed three bullets. That confused me because I had only shot twice (and my PH didn’t shoot at all). The head skinner handed me two easily recognizable .416 Weatherby Magnum bullets. One soft point with perfect mushroom, and one solid with slightly over 99% mass retention. Then he asked if I shot a .375 caliber rifle and hit the buffalo back near the gut area. Not even bringing a .375 rifle on the trip, I politely said no. Gary told me the buffalo most likely took a poor shot from a .375 caliber a few years back and just went on living his life without any life-threatening damage. That’s how tough these things are! The buffalo took a .375 bullet to the gut a few years ago and kept going on about his day. Now that’s amazing!

I had five hunting days left. The rest of my trip, I hunted plains game with PH Doug Duckworth. After many entertaining stalks and some belly crawling, which I got pretty good at and familiar with in Africa, I ended up with four more animals. I shot a zebra, waterbuck, impala, and warthog. The zebra was very good looking without many scars on his hide. He’d make a perfect rug. The waterbuck measured 28" and would be a nice sculpted-back shoulder mount. The impala measured right at 22.5" and would also be a nice sculpted-back shoulder mount. Now the warthog was an absolute stud! Topping the scale at over 90 kilograms, this bad boy also had 14" tusks.

The Sengwa Research Area hunting camp was absolutely amazing and shockingly beautiful! The food, lodging, hospitality, scenery, and amount of African game were all top-notch. From the homemade bread that was made in a ground oven with hot coals to the herds of elephant with over 100 head to a really neat, hollowed-out baobab tree, Sengwa is the epitome of a perfect African experience. Be prepared to eat what you kill. I ate every single animal that I shot, with the exception of the boar, and everything was delicious! I took so many pictures and videos to help me remember this amazing trip and remind me of all of the cool things Africa has to offer.

I would highly advise you to do research before your trip. Do research on the animals in the area, the ones you plan on hunting as well as the ones you don’t. Do research on the safari company. Do research on the PH. You can’t go into one of the hunts in a foreign place with too much information. You just can’t. Practice shooting and immediately reloading the firearm. Like I have discussed, these animals are tough and more than likely will need another shot. Make that follow-up shot quick for a good, clean, humane kill on a wounded animal.

Before my trip but after my rifle has been sighted in for a certain distance, I add two things to the rifle/optic. First, I will use a computer to make a small ballistics/drop chart for the particular round that I am sighted in with and tape it to the side of my rifle. This way, I will have a quick reference if I must shoot at longer ranges and know exactly where my bullet will hit. Second, I add a couple dots of bright colored fingernail polish in the crack between both of my optic’s rings and the scope itself. After travel, if the scope has been bumped at all, there will be a white crack in the fingernail polish. If you see the white crack, you must start from scratch and re-sight in your rifle. Another helpful hint for you would be to not only practice shooting before your trip, but to practice shooting from sticks (at minimum a tripod). Two sturdy sticks tied together with electrical tape or a shoelace is great training. I was used to shooting from solid rests, similar to my deer stands back in the States. Most of the time, this skill of shooting from a bench will not get you very far while hunting in Africa. Practice shooting from sticks. Seriously, it’s not as easy as it looks on Hornady’s Dark & Dangerous TV show. From a memory standpoint, bring multiple digital cameras and video cameras. Bring extra batteries and SD memory cards for these cameras too. Bring a trauma/first aid kit, like the one that Tactical Medical Solutions donated to Mokore Safaris. So far from civilization, why take the unnecessary risk?