Am I A Sheep Hunter? 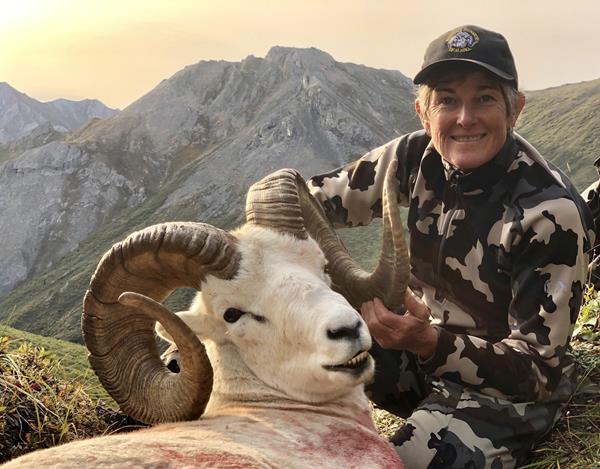 Am I a sheep hunter? Can I conquer a sheep hunt mentally and physically? These two questions and many others have been going through my head for many years. I have read article after article about sheep hunting and I have talked with many members of my chapter of Safari Club International about their sheep hunts, but the questions remain. Can I do it, and can I afford it?

In 2015, I drew the coveted 680 tag in Montana. After a fantastic hunt, I killed a wonderful Rocky Mountain bighorn ram and loved the hunt. It was from a cabin with a cook, driving around in a truck, and the pack out was very difficult. However, this was not a full backpack, self-contained hunt. Again, the question came up, “Am I a sheep hunter?”

Fast forward to January 2018 at the SCI Convention. I was walking along, drinking an adult beverage and talking with Donna Boddington when we passed a booth with a pedestal mount of a Dall sheep. I said, “Wow, that is one animal I would like to hunt.”

I had made a decision to try and book a trophy mule deer hunt at the convention, and I had done so earlier in the week. That was my hunt for the year unless I drew a tag, so I had no plans to book another one. As we sat down at Dave Leonard’s Mountain Monarchs of Alaska booth, I immediately liked him. I told him no horses for me because of an earlier accident on a horse on my Alaska moose hunt that left me with a torn ligament in my thumb and a cracked sternum. I would only do a backpack hunt. Dave said that he flies in the client and guide by Super Cub to base camp and it is all backpack from there.

Well, the next thing you know, Donna and I were booked for our Dall sheep hunt for August opening day 2019.
On January 1, 2019, I began my training. I was booked to leave on August 7th. I laid out an entire training regimen for the next eight months and worked hard to prepare. In the eight months, I only missed three scheduled training days. The week before the trip, I got a very bad cold followed by bronchitis and then a terrible allergic reaction to the medication my doctor put me on. I was in bed for seven days before the trip and was now in panic mode. I could not believe that after all my preparation physically, preparing all my gear (Brendan Burns of KUIU was kind enough to help me with my packing list), etc. that I was now in bad shape right before the hunt. I called Donna and she too was in panic mode with a bad tooth that needed surgery immediately. “Are you kidding me?” is all I kept thinking. My physical trainer kept reassuring me that I had done the work and was ready and that the week in bed would not hamper my results.

Off I went on August 7th with Donna having to postpone her hunt by a day so she could have her dental surgery. She ended up with 17 stitches in her mouth and was off on a plane to meet up at the Ram Hole, which is what Dave called their house/cabin. I was worrying about how tough I was and then I heard all about what Donna was going through. I thought, “You better suck it up. She is way tougher than you are.”

As soon as I arrived in Bettles, which is on the south slope of the Central Brooks Range north of Fairbanks, Dave loaded me up and off to base camp I went. The next day, my guide and I hiked seven and a half hours to our spike camp. We spent three days there without seeing one sheep. My guide, Dave Fischer, kept reassuring me that this was an awesome location and that the sheep were here, we just had to find them.

On the third day after combing the entire area and hiking all day, we decided the next morning that we would hike the seven and a half hours back to base camp, resupply, stay the night, and head out to another location the next day. I was all for making a move but was getting a little worried that it would take us two days of hiking to relocate and that would put my remaining hunt days down to three.

We made the move, and after hiking for over eight hours in the pouring rain, we arrived at our new spike camp late in the evening with winds that had to be 50-60 miles an hour. It was very difficult to put our tents up. Dinner was Mountain House in my tent by myself reading my book. However, just before going to bed, we spotted two rams on the other side of the mountain about 2,000 yards away. I slept great that night knowing that sheep were spotted.

The next morning, we hiked across a very dangerous and steep shale rockslide. After getting to the other side, we immediately spotted another older ram with a young ram. The older ram was very heavy, but from this distance, we could not tell if he was legal or not. The wind was blowing so hard that even if you laid down it was hard to hold your binoculars still. It was even harder to use the spotting scope. After several hours, we decided that the location that these two rams were in would be very difficult to make a stalk without them busting us. We decided to try for the other two rams that we had seen the day before. If that did not work out, then the next day we would approach these rams from a different direction.

It was now midday, and we made our move. We got close, dropped our backpacks, and began a slow stalk towards them. Soon enough, we were busted and I saw both rams running out the bottom. We stopped and sat down for about an hour as the two rams stopped in the bottom of the drainage and laid down to look straight up at us. We were pinned down. After an hour or so, they got up and started up the drainage. At the top of that drainage was our spike camp. They were headed right for our camp. We made a move all the way around the mountain to cut across and cut them off. We spotted the young ram but could not see the older ram. The young ram could not sit still. He kept feeding, laying down, and then getting up. He was like a teenager that could not sit still. Every time we could not see the rams, the young one would give their location away.

It was getting late and we decided that we better move. We snuck very slowly up a ridge, and just as we started to sit down to glass, I looked up and the big ram was staring right at us about 35 yards away. We were busted again, and he took off running up the drainage right towards our camp. I had no choice but to shoot him while I was standing up just as he quartered away at 126 yards. It was the best shot of my life. I was so excited! On the eighth day, I shot my ram. I was now hooked on sheep hunting. All the questioning was now out of my head. I did it!

As we got back to the Ram Hole, Craig, Donna Boddington, and all the crew were waiting to hear our story. Donna had killed a great ram after spending the night on the mountain with no sleeping bags or tent. The ram that she wanted to kill was just too far from spike camp to make the hike in one day. Any question about her toughness was now completely out of the picture.

After showering for the first time in nine days, I sat with Donna and Craig drinking red wine and Craig began to talk about Donna and me working towards completing our Ram Slams. I thought, “Are you crazy?” I was tired, I had lost about eight more pounds, and I did not shower in nine days. Let’s just take a quick breather. Within a week of arriving home, I called Donna and told her we should start investigating to book the next ram hunt. I think I answered my two opening questions, or am I just crazy?