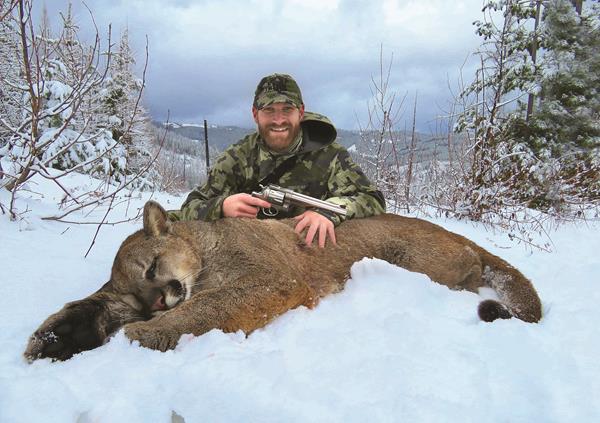 I had been dreaming of a mountain lion hunt for many years, researching outfitters, looking at prices and pictures, and watching video after video on the internet. It wasn’t until I was at the PA Eastern Outdoor Show that I finally found an outfitter I was willing to trust enough to take me on my dream hunt. I met Mike Sluka from Longtail Outfitters there, and it didn’t take long for me to realize this was the person I wanted to hunt cats with. I was able to bring one person along on this hunt, and my wife, Kara, very much wanted to be a part of it, partially because she enjoys the outdoors as I do, but also because she knew how much this meant to me.

We landed in Spokane and were picked up by Mike in his truck with the dog box on the back and drove to the small cabin that was our home for the week in Northern Idaho. We got up at around 1 a.m. the very next morning to start driving logging roads, looking for fresh tracks. Mike had Kara and me in his truck, while another guide, Benny, was searching another mountain at the same time. I specifically remember Mike getting a call that morning and replying to Benny, “Perfect, that’s perfect.” The truck turned around right after that, and we were heading to a fresh set of tom tracks that Benny had found.

That day ended up being brutal. We released the dogs right at legal daylight, and they shot over the mountain. We had to drive around to the other side of the mountain to continue getting GPS connection, and we found that they had split into two groups. The first group treed something about 700 yards as the crow flies above us. We started there first, and after a straight uphill hike, we caught up with the dogs.

I got to the tree they were barking under and looked up to see one of the coolest things I’d ever seen – a fully mature predator staring straight down at me. That was an unforgettable moment as the eyes of the lion, the first I’d ever seen in the wild, pierced right through me. We determined it was a female and decided to let it go to pursue a mature tom instead.

That left the second group of dogs, which was over a mile up the mountain. After a long journey, the dogs dispersed just as we were getting to the top. Some headed back to where we turned them loose, while we were able to intercept others on their way back. We ended up finding where they “treed” an animal, but it was actually a bear den. These same dogs are trained to track bears in the spring/fall seasons, but we sure spent a lot of time hiking that mountain just to leave a bear to get back to his hibernating slumber.

The next morning, we found big lion tracks with some fresh snow in them, so it was tough to decide how old they really were. We cut loose two dogs, Trixie and Whiskey, to see how they’d react. Both took off, but we didn’t think it was an extremely fresh trail. Hours later, both dogs were howling on the next mountainside over, and the GPS indicated they both treed. My heart was thumping yet again!

We ended up needing to use snowmobiles to get to the dogs, which was a whole story in and of itself, especially the near-death experiences along steep cliffs hundreds of feet above the mountain bottom. After that adventure, we finished the trek to find a gorgeous tom lying majestically in a massive pine tree. We got some awesome pictures of him looking down at us and the dogs, and I had to admire those two dogs for trailing him about a mile successfully.

While preparing for a clean shot, the lion jumped out of the tree and took off, making my heart jump in my throat. Mike and Benny cut the dogs loose again as they had been leashed for safety, and thank God they treed him again within a few hundred yards. This time, I was able to get a clean shot off with my open-sighted .44 revolver. In no time, the lion was on the ground and the snow falling out of the trees was lightly covering him. It was yet another beautiful sight I will never forget.

After another crazy adventure pulling the dogs and lion back on a custom snow sled and getting stuck several times, we made it back safely. Both Mike and Benny indicated those two days were some of the most action packed and tough days their hunters would probably experience. I told them I wouldn’t have wanted it any other way, and that truly was the lion hunt I had dreamed of for years. I came there for a story, and I was leaving with plenty of them.

The next morning, we treed a beautiful tom bobcat, which was another first for me. We live in Pennsylvania where bobcats exist, but I never saw one in the wild until that day. I was able to make a clean shot with my .17HMR, and we headed back across a very cold creek to conclude my hunting portion of the trip. We spent more time in the woods after that and shared good stories and meals together before we headed back home.

I’m truly thankful for being able to meet everyone I did out there, especially Mike, Benny (aka Billy Fancy), Trixie, and Whiskey. I’m also still in awe of the amazing animals I harvested with their help. Thank God!