A Great Hunt in Kansas 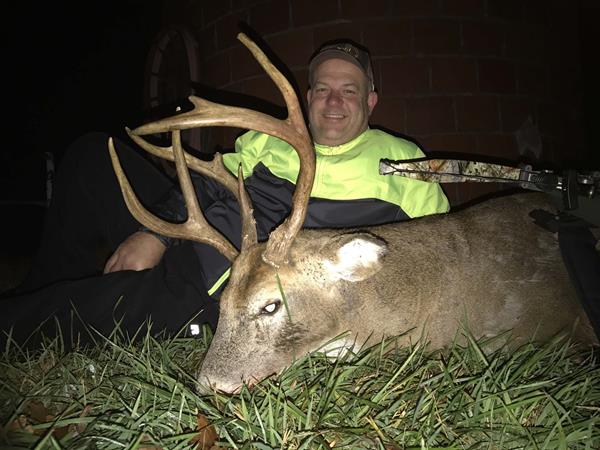 I was out hunting in southeast Kansas on a ladder stand and had seen several shooter bucks, but this year, I wanted a thick rack or just something different. My buddy told me there was a double mainframe 9-point buck trolling around.

Monday, November 6th at about 4:10 p.m., here he came. I had my Excalibur 405 crossbow out on my first hunt ever with the crossbow. Just when I was getting ready to harvest him at an easy 27 yards, another buck chasing a doe startled him. Off he went, but then he came back across through the timber. I could see a window through the trees of about 3 feet by 4 feet, except now (which I didn’t have time to rangefind him) he was at 52 yards. I had practiced out to 50 yards, but not through the woods at a moving target. As he broke into the opening, I let 'er rip! Crack! It sounded like I had missed and the bolt had hit a tree. I got down and found a great blood trail. Seventy yards later, there he was, the most unique non-typical 9 pointer I had ever shot. I had a great hunt in Kansas!