Betting on a Long Shot 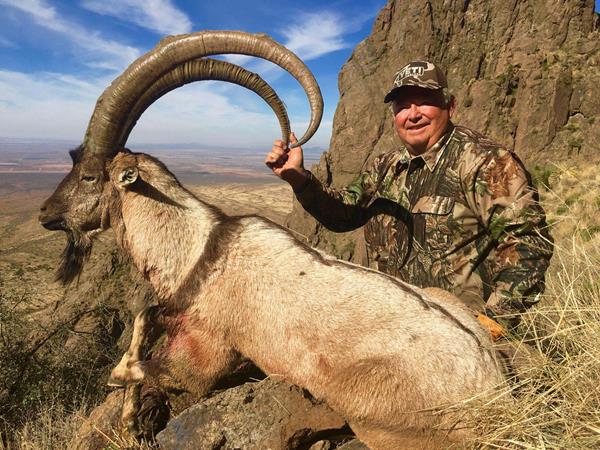 On April 12th, my ibex hunt began in earnest when I learned I’d hit the New Mexico Game and Fish ibex lottery. I had drawn the depredation hunt the previous year and had spent several days scouting, traversing, glassing, and hunting (unsuccessfully I might add) the area I’d hoped someday to return to for a trophy. I had recently turned the big 70, and I was determined to be successful. I contacted the good folks at Huntin’ Fool for leads on outfitters. It wasn’t long after contacting them that I was in touch with some new best friends at G3 Outfitters. Without an ounce of trepidation, we struck a deal.

Before I knew it, it was time to head south to the Florida Mountains to meet Jay Platt and his buddy, Jed Murphy, the day before the season opened. We wasted no time heading to one of their hot spots to begin glassing the mountains, and Jay and Jed put me on several ibex. We watched them until the blue New Mexico skies began to give way to dusk and the ibex made their way towards a series of caves in the side of the mountain.

On the first day of the hunt, we were up high in the mountains by the time dawn was beginning to break. As morning light began to turn the sky from crimson to blue, several goats began to emerge from their caves. As the herd came to the area where they were going to feed, we singled out one particular billy. Upon further inspection, we noticed he was only half trophy sized. We continued to watch as the herd ambled away to more food.

Jay and I continued to glass the mountain, and then he said, “I see one.” My heart skipped a beat as I navigated my trusty old 10x Zeiss binoculars I’d been carrying for nearly 40 years over to the location Jay had indicated. I could just barely make out a billy with a nanny behind him. Jay told me to get on him, and I immediately turned the Leupold scope up to 12x and laid my rife across my pack. I worked my body into a stable and comfortable position, and Jay fed me the horizontal distance of 460 years to the billy. I squeezed the trigger, and my 7mm mag bucked. A split second later, I was able to see through the scope that the bullet had hit the billy before he crumbled and rolled of the cliff and out of sight. The only evidence that he’d come to rest some distance below was a loud thump when his body stopped falling. Elated, we turned from what had just happened back to business, and I suspected we were both thinking the same thing, I sure hope those horns are still intact.

After what seemed like a torturously long hike, we were both relieved to see that not only were the horns still intact, but he was also a beautiful specimen. Physically whipped and still totally elated, we verbally replayed the hunt over and over again as we photographed, skinned, caped, and quartered the ibex in preparation for our way back down.

I cannot begin to thank Jay and Jed enough for helping me pull this off. That billy was a beauty and exactly what I had hoped for. Jay also let me in on a little secret, he had never guided somebody as “seasoned” as me on a successful ibex hunt. My success also serves as a testament to his skill as a guide.