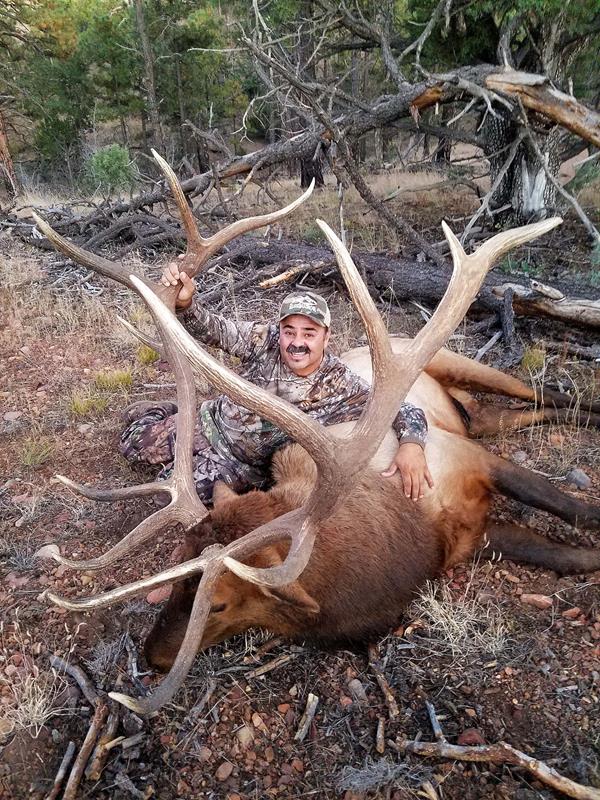 I’d always wanted a shot at a giant elk, but I had never been drawn in Arizona. However, that all changed this year when my credit card was hit for the $650 non-resident tag fee. When the draw results were posted, I discovered my 23 bonus points had earned me the opportunity to hunt for a coveted early season Arizona bull.

After consulting with some friends, I sought out to engage a qualified guide. I did some research, contacted a handful of guides, and spoke to a few, making sure they knew I was a novice elk hunter and would be relying on them to make my hunt a success. One of the first guides I spoke with was Shane Koury from Koury Guide Service.

However, I ended up engaging another well-known guide and even paid a deposit, but shortly thereafter, I realized I may have a work conflict and cancelled my engagement with that guide. Things ended up straightening themselves out at work, and out of the blue, Shane contacted me to see what I had decided to do for my hunt. The timing was good and I felt like I was in a position to recommit, so I did just that.

I packed my gear and trailer and headed off to my hunt. When I arrived, Shane explained my options and had his eye on two solid bulls in the 360"+ range. We decided to start the morning by listening for “The Judge,” which was perceived to be the better of the two by a small margin. Shane had the other bull, named “Chuckles,” on video, and he was huge with a tall rack. Shane had been watching both bulls since last year.

The Judge had gone quiet for three days leading up to the hunt, and as things turned out, he remained quiet throughout my hunt. When we didn’t find The Judge opening morning, we quickly made a move to Chuckles’ neighborhood where Shane had his pattern nailed down tight. Shane’s son, Skyler, had watched Chuckles make his morning passage early, so we made a move to his bedding area. We didn’t see Chuckles that morning but got back on him late in the day. I was set up, waiting for him to cross through the narrow window where I would have a very brief shot. I peered through my scope, and Shane warned me to be ready to fire on his command. Chuckles passed into the narrow window at just under 100 yards, and Shane said, “That’s him. Shoot him!”

I hesitated before squeezing the trigger, knowing I was right on him, but he didn’t go down. Knowing that my gun was on and feeling pretty good about the shot placement, I’m confident the shot was deflected by some limbs Chuckles had stepped in front of during my brief hesitation. Surprisingly, I did not get rattled with buck fever throughout the hunt, but this was the first of four blown opportunities and three failed shots at Chuckles.

The following morning, we returned to a location that would soon be all too familiar to me. Shane did his thing and put me in the right place, and Chuckles cooperated, stepping out some 300 yards away. However, things happened faster than I had anticipated, and by the time I got on him, most of his body was already in the trees, so I passed. We got on Chuckles again at less than 75 yards during the evening and I had a few great shooting lanes, but he never stepped out.

The morning of day three took us back to the same place in hopes of another shot at Chuckles. I was set up and ready to go when he stepped into the window at approximately 300 yards. Shane said to shoot him, and I pulled through the trigger. Once again, I was certain I was on him and didn’t feel like I had flinched, but I soon realized I had missed again.

Day four had me looking for revenge as I was keyed-in on taking Chuckles. Once again, he did not disappoint and was poised to make an early showing directly adjacent to where we were set up. Low and behold, the cows passed through a very small window and Chuckles followed just 48 yards away from my barrel. I was surely prepared, and on Shane’s command to shoot him, I pulled through the trigger and knew Chuckles would be lying in the trees. I was wrong. This time, I didn’t miss, but I definitely did not put him down. I felt horrible for Chuckles and equally bad for disappointing Shane again. We tracked him for a few hours, and while there was an occasional drop of blood, it was clear that he was not mortally wounded. We eventually lost the tracks and the occasional sporadic drops of blood among numerous other tracks.

Day five took us back to listen for Chuckles, and while we thought we heard him once in the dark, he didn’t show. Knowing the morning breeze would soon turn into some serious wind, we made a move and started looking for something else. By this time in the hunt, part of me was prepared to shoot something small and get out of Shane’s hair, but I’ve always been too stupid to quit and Shane never wavered, so we kept working.

On day six, we drove across the unit and it wasn’t long before Shane had us on some bulls. Most were smaller, but one was a decent 350+ class 6x6 with a dropper eyeguard and no broken tines. Unfortunately, he crossed onto the reservation before I had an opportunity to get a shot on him. Still fixated on Chuckles, I spent my night in his neighborhood in hopes I would hear him. It wasn’t a wasted trip as I heard his definitive bugle and chuckle.

The morning of day seven, the final day of the hunt, brought renewed excitement knowing Chuckles was still alive and bugling. There was a remote chance he would show, but I had a huge decision to make. Shane picked me up early, and when we came to the main intersection, I told him to turn right because we were going to see Chuckles. We were there extra early and undoubtedly heard Chuckles’ distinctive bugle, but we never saw him. We moved on to another area, continuing to search and hoping we would stumble across something. The morning proved unsuccessful, and I was down to the wire.

Shane picked me up for the final afternoon hunt, and we decided to look at yet another area he had an eye on. We got into the area and made a stop to call, but with no response, we moved down the road to call again. We were instantly greeted with a response. Shane said to grab my stuff and away we went. We were able to make a good move on the bull to get downwind of him. Finally, we had him at approximately 75 yards. As he continued his deep bugle, we waited him out for a good 20 minutes. Then, a cow and a calf walked up on us from behind and spooked, blowing our cover. They sped out of the area, taking the bull with them. Without hesitation, Shane stayed focused and said to hustle back to the truck and see if we could find another one.

Less than a quarter of a mile from the truck, we heard a lowly bugle in the distance and away we went. The bull was on the move, and the chase was on. We hustled along the tree line, and as we got to a draw, Shane caught a glimpse of the bull through the trees. Shane all but screamed at me to get ready to shoot, which I did. He dialed me in to the one window the bull was going to pass through. As daylight waned and the bull stepped into the window, I heard those famous words for the last time, “Shoot him!” This time, I hit my mark. When we got to the bull, we were in shock that we had pulled it off with such a quality bull.

That, my friends, is how I spent the final moments of the final day of my first Arizona elk hunt, a journey that began 24 years ago. My stubbornness not to quit and a guide who never gave up on me led to the bull-of-a-lifetime for me. Thanks to Shane Koury and the support of my family!