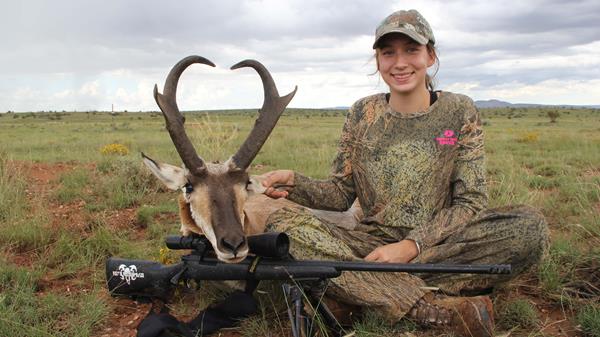 I was very fortunate growing up that my dad took us hunting. He instilled the passion and love of being outdoors and taught us the importance of working hard and appreciating all aspects of the hunt. He also taught us that it is not always about the kill, but more importantly, it is about the experiences and memories made. Now that I have kids of my own, these values have an even deeper meaning. I cherish the time that I get to spend with my wife and kids on their hunts.

The girls in the house were extremely lucky in the draw this year. Both of my daughters, Hannah and Summer, drew rifle antelope tags in unit 10 as well as late rifle bull tags in unit 27. My wife, Krissi, drew an early rifle bull tag also in unit 27. Having grown up hunting and guiding elk in unit 27, I felt pretty confident about the elk hunts. However, I had not stepped foot in unit 10 before, and with it being on the opposite end of the state, I knew that scouting was going to be tough. To add to the “problem,” Krissi’s elk hunt and the girls' antelope hunt overlapped by a few days. After talking to Chad Rhoton, he assured me that he would have the scouting handled in unit 10 for the antelope so that I could focus on finding Krissi a good bull in 27.

After weeks of scouting, multiple trips to the range, and making all of the preparations, Krissi and the girls were ready. First up was Hannah and Summer. We met up with Chad a couple of days before the antelope hunt and he showed us a few different areas that we needed to focus on that he knew held some great bucks. I was lucky enough to have my dad along with me to help with the girls. We found a few bucks the day before the hunt that made the “hit list.” Our number one buck was also on the top of the list for a handful of other hunters, and as it goes sometimes, he was no longer available after about 15 minutes into the hunt. We immediately relocated to try and find one of the other bucks we were interested in. It didn't take long to find him, and after a few hours of playing cat and mouse with him, Summer made a perfect 350-yard shot with her .300 WSM built by Western Precision Rifles. Her buck ended up taping just over 82”.

Next up was Hannah. We found her buck in the afternoon, but it was too late in the evening to try and put a move on him, so we just watched him until dark. The next morning, we were in position, waiting for daylight to break. We immediately located him in the same area where we had left him the night before. My dad stayed back to keep tabs on him while Hannah, Summer, and I made our mile-long stalk. After getting as close as we could, we ran out of terrain that concealed us, so Hannah set up for the shot. Hannah made the proper MOA adjustments to the scope after I told her it was 687 yards. She felt very confident because both of the girls had been practicing at distances well beyond that, and when the buck turned and presented a good shot, she made an absolute perfect shot with her Western Precision Rifle and he never took a step. Her buck ended up scoring 85 3/8”.

Now it was time for Krissi’s elk hunt. Since the girls killed their antelope in the first couple of days, I was able to get back to 27 for a few days before Krissi’s hunt started. I saw tons of bulls, but it wasn’t until the evening before opening day that I was able to relocate one of the bulls that was on the hit list that I hadn't seen for three weeks. I watched him until dark and went back to camp. Opening morning found Krissi, our good friend, Roger, and me on our point waiting for daybreak. It didn't take long before I found the bull pushing his cows down into a thick draw. We watched him for the better part of four hours, trying to decide if he was the one that Krissi wanted to punch her tag on, even though it was opening day.

The decision was made, and after the bull bedded, we relocated to get a better angle for the shot. Krissi got settled in and hammered her bull in his bed at 708 yards with her Western Precision Rifle. The bull ended taping pretty close to what we thought he would be at 375". In one week, the girls had killed two great antelope and Krissi had killed an awesome bull.

Hannah and Summer weren’t done. Two hours before daybreak on opening day, we left the truck to flashlight into an area where I had found a pretty good bull the day before. We had my dad, our good friend, Roger, and my brother, Brent, who owns Western Precision Rifles, with us. We pushed it hard to get to the canyon that we wanted to start glassing in, and we made it just in time to start glassing while waiting for dawn to break. I hadn’t even taken my pack off when I picked up the bull that I had seen the day before with my 10s. We were well within range to shoot from where we were, so Brent immediately got the 7mm RUM set up. After a very extensive “Rock, Paper, Scissors” tournament to see who got to shoot first, I had to finally tell the girls that the next one wins. Summer won with “rock.” She got settled in and steady and dropped her first bull at 608 yards. After pictures were taken, my dad, Roger, and Summer stayed with her bull to get it quartered while Brent and I took Hannah up over the next ridge to glass the next basin.

We hadn't been glassing for 30 minutes when Brent picked up a bull in a tangled jungle of locust brush. We knew that he was a shooter and we were definitely within range, but it was so thick that we had a hard time keeping track of him. The only way we could tell that he was moving was by seeing the tops of the locust brush moving. We finally determined that he was bedded, and we relocated to get a different angle to maybe have a little bit more of a clear shot when he stood up. Hannah lay behind the gun for four hours, and when the bull stood up ,she threaded the needle on her first bull at 575 yards. After pictures and getting Hannah’s bull quartered, we met back up with my dad, Roger, and Summer for the long hike out. When it was all said and done, we were just over six miles from the truck. It was well after dark when we finally made it back. We had two very happy and very tired girls.

The next day, we took mules to as close as we could get them and came out with both elk in one trip. Hannah's bull ended up scoring right at 350", and Summer’s bull was an ancient warrior that had broken his pedicle and still taped out at a bit over 300", even missing his G1 and G2 on one side.

Those of you who have been lucky enough to hunt with your wife and kids know the emotions that I experienced. To be able to share these moments and make these memories all while having my brother and my dad with us made it even that much better. I can’t even find the words to describe how fortunate I feel that my wife and kids love to hunt with me and that they are willing and eager to put in the work, preparations, and practice to make these experiences happen.

The kill doesn’t matter, and the score doesn’t matter. What matters is the deep bond that exists amongst us because of this sport called hunting and the time we spend together in the hills, our “family time.”