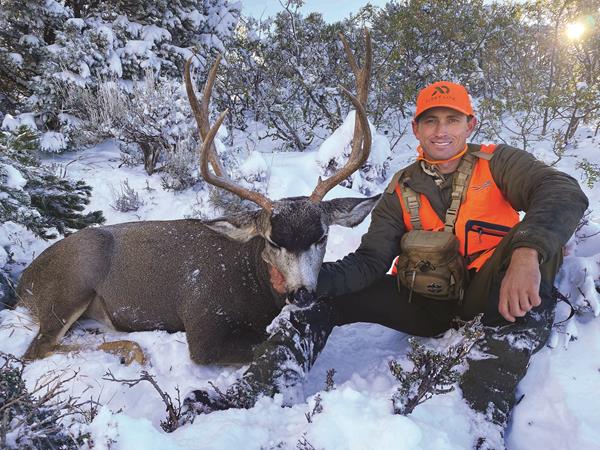 From my earliest childhood memories, I can remember the enjoyment that being outside brought me. Those early road trips with the family, riding along in our single cab Ford pickup and listening to “Prime Country,” each of us so happy to see the dust off the tailgate where the dirt roads began, were amongst some of my fondest memories. Whether we were chasing upland game or waterfowl or simply threading a worm with one of Grandpa’s handmade worm-threaders, I was never more content as a child. It was memories like these that fueled my evolving personal interests in hunting, fishing, and simply pursuing a lifestyle that enabled me to be “on the mountain.” Such personal interests have since become a passion and lifestyle by none other than God’s grace.

We can’t control the circumstances to which we’re born into, nor can we control the environments in which we’re raised thereafter. I made a mental note of this early on in life that remains with me to date. It’s a grounding perspective that aligns with the age old saying of “You can’t judge a book by its cover.” I was born and raised in Southern California. The generations prior to me had moved there in the 1930s looking for better work, having endured various hardships in the agricultural and transportation services elsewhere. Fortunately, my family had a well- established tradition of hunting and fishing that they retained and passed onto me. I can still remember the captivation I endured when viewing those old family photos, the ones where the men wore flannel shirts and blue jeans displayed in the classic patina of black and white. We participated in hunting and fishing activities as frequently as we could, which generally was every few months or as often as time and money would allow. Even when I wasn’t on the mountain or in the desert, I was reading books and articles about mountain men or asking if I could clean various firearms (again) for the sake of building better proficiency and understanding. Everything about the activities of hunting and fishing appealed to me to the point that they were becoming a resounding call to adventure.

As high school came to an end, I began exploring ways in which I could be “on the mountain” with greater frequency. I pursued a degree in Wildlife Management that eventually subsided to my becoming a sawyer with the Bureau of Land Management as a wildland firefighter. The next few years were filled with adrenaline as I was blessed to work in many landscapes across the West, either chasing wildfires or simply thinning trees in preparation of a prescribed burn, often with a grand smile and my face covered in black soot. It was that position that brought me to living in Southern Utah as I had transferred to the Arizona Strip Field Office.

I was determined to get closer to summits that extend above the tree line, to high mountain meadows that bloom vibrantly in the summer, and to a greater diversity of the wildlife that called those places home.

Although I had finally arrived in living amongst the mountainous landscapes of Southern Utah, that beckoning call to adventure soon pulled me in a different direction. I enlisted in the United States Marine Corps and started my expeditious journeys through Operation Enduring Freedom (Afghanistan), Operation Inherent Resolve (Iraq/Syria/Libya), and various other expeditionary roles in the Global War on Terror. I served as a UH-1 Crew Chief flying aboard the iconic “Huey” helicopter for the next 11 years, manning weapon systems such as the GAU-17 Minigun and GAU-21 .50 Caliber Machine Gun. My travels took me to 23 different countries in total, none of which were as visually appealing and abundant in resources as the western United States. I held coveted billets such as Squadron Weapons and Tactics Crew Chief Instructor and UH-1 Developmental Flight Test Crew Chief (Category C), which enabled me to fly in the highest of risk flight regimes of which aircrew are present for the testing and evaluation of both aircraft and equipment. I can still remember those “non- standard” flight briefs like they were yesterday, the ones where all aircrew were required to don personal parachutes in the event of an in-flight emergency, and the ones where we were attempting what few, if any, had attempted before. It was a great honor to serve with some of the most elite in Marine Corps Aviation and with so many fellow patriotic Americans of the time, both military and civilian alike. I’ll never forget those times after 9/11 when our nation stood unwaveringly united with one another and can only hope that degree of patriotism will once again return under different circumstances.

All through my travels and adventures, I’ve been accompanied by my loving wife, Jenn. By God’s grace alone, we began dating in high school and married soon thereafter. She was/ is my “Jenny” (there’s my cheesy attempt at referencing the classic Forrest Gump movie), and without her, I simply couldn’t be. She has been steadfast and tirelessly supportive of me in my endless endeavors for the last 22 years, and for that, I could never thank her enough. We have three children whose names and ages are: Emma Faith (12), Paige Grace (9), and Danner (3). The mention of their names brings a smile to my face even though our son has taken a recent liking to marking up our interior walls at home with markers, makeup, and anything else he manages to find. In 2018, we chose to leave active duty and return to Southern Utah. Our primary desire was to make up for lost time, myself specifically, with each other, our children, and the mountains once again.

Since our return to Southern Utah in 2018, it has been a wild ride of mountainous adventures and immeasurable contentment. We’ve been blessed with the ability to pursue an abundance of OTC and general season tags through many western states in the last several years, trying to make up for lost time. We’ve found great pleasure in chasing elk and mule deer specifically, and although we don’t have any trophy-sized animals to our names necessarily, we’ve accrued a number of stories to tell with the pack outs and the “take no easy way out” mentality we take pride in. It isn’t unusual to see meat being processed in our kitchen or wrapped nicely within our freezers, and we enjoy fulfilling these actions on our own. It always brings a smile to my face when my children so eagerly await a meal of wild game being prepared by their mother, and I often feel a resounding sense of fulfillment when they make comments to their main staple being elk meat all year long. Basically, we’ve been aggressively diving head first into any outdoor venture we can find that involves hunting and fishing, and we’ve been making lifelong memories along the way.

In summary, I’m a simple guy who has been blessed with far more than I deserve. I’m fortunate beyond measure to have been included as a member of the Huntin’ Fool staff, and I look forward to helping other like-minded people “Equip for the Outdoors” as the Director of Gear Fool. I’m passionate about answering the beckoning call to adventure, exploring remote wildernesses, and living amongst the wild creatures that roam there. I believe that personal grit helps get us there and quality gear enhances the experience. It’s my professional mission, and that of the entire Gear Fool Team, to offer modern gear solutions that are vetted by our team of professionals so that others may enjoy grand adventures of their own. Fair winds and following seas to all this fall.