How to Locate Water Features on Topo Maps 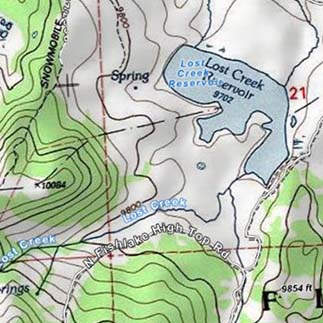 If you’ve been following my series of topographic map articles, we’ve learned that these maps are packed with a ton of information. This time, I would like to discuss one feature type that could arguably be the most important one when eScouting. Water! Let’s dive into understanding and finding water features on topographic maps.

Water is the most dynamic feature found on maps. I recently took a trip to Alaska with my family and went fishing up the Susitna River. The river is quite large in width, but it is made up of a lot of smaller offshoots. Without understanding the seasonal runoff and dry periods in this region, I would imagine that at some point in the year the water level is high enough that it would overrun some of the smaller islands found between its banks at the widest points. For example, take a look at the included image. It shows you exactly what I am talking about. At this spot, the distance between the outer banks is just over 1.5 miles. That’s crazy!

This map also shows more water features found within this region of Alaska. We can see marsh areas, lakes, ponds, rivers, and streams. While eScouting this area and region of Alaska, we could safely say that the water features we see on this map will most likely be there in real life. We know that Alaska usually gets plenty of snow and rain throughout the year that keeps things on the ground virtually the same as depicted on the map. However, that’s not always the case. I live in Utah and things are quite different.

Here’s another example. My family likes to go for summer evening rides in this area. As you can see, there are a lot of water features found on the map. We can see springs, a reservoir, a couple streams, and marshy areas. I am familiar with the area and know that during different times of the year there is some water, little water, or almost no water at all in this area. Depending on the moisture received during the winter or summer storms, this area can really be tough hunting if you or your game relies on a lot of water.

Another thing to keep in mind is to not get comfortable with only one base map. Use everything you can when eScouting. I’ve included screenshots of the same area with two different topo layers and an aerial layer. Look at the differences in the details. We have several different base maps available in our 3D Hunt Planner.

Streams and rivers can sometimes throw you for a loop. That being said, the type of stream/river and the direction are tricky. There are several types of rivers and streams identified on topographic maps. There are perennial (year-round) streams and rivers, intermittent streams and rivers, and disappearing streams. Understanding the amount of water an area has received can help answer a lot of the unknown questions. We all know that water flows downhill, so on a 2D topographic map, we can use streams and rivers to help us find uphill and downhill. In most cases, as water runs across an area over time, it cuts its way through the land, taking mostly rock, and dirt and displacing them downriver. This creates a V shape in the topo lines. 99.9% of the time, the bottom of the V points uphill and opens up downhill. Think of it like a glass of water. The bottom of the cup is the bottom of the V and the top of the cup is open, thus the top of the V. If you were to pour the water out, it would be going downhill.

As always, happy mapping! Let us know what you think of our 3D Mapping Application.