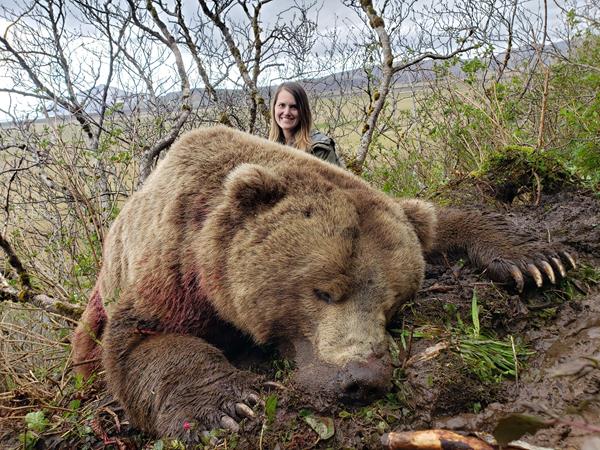 Ever since moving to Alaska with my husband, Adam, in 2016, I have had a goal to shoot Dall sheep, mountain goat, and brown bear. The odds are very low to draw these hunts, especially the brown bear tag for Unimak Island where some of the largest brown bears can be found. I applied for the draw hunts as soon as I became an Alaska resident, and I was so excited to find out that I was successful drawing not one, but two tags. I drew a mountain goat tag and the Unimak Island tag for brown bear! I was super excited but also very nervous. It was hard to imagine what it would be like to get close enough to a giant brown bear to shoot it. I had plenty of time to prepare because the hunt would not take place until May.

March came along, and I started to wonder if we would even be able to fly to Unimak Island as the COVID-19 pandemic was causing travel restrictions to be put into place. Then, in early April, I received news that the ADFG had cancelled all bear hunts through the end of May. I was devastated! Evidently, many other people were upset about the hunts being cancelled because the ADFG received multiple complaints. Therefore, bear hunting for Alaska residents was reopened the following day. What an emotional roller coaster! However, we still needed to figure out how to get to the island because our original flight was cancelled due to COVID-19. Thankfully, Adam had many connections with private pilots due to his fishing and hunting experiences in Alaska. He made some phone calls, and we were able to find someone who agreed to fly us down.

The day finally arrived for us to fly out to the island and start hunting. The weather was looking good initially, but when we got to Lake Clark Pass, there were too many clouds obstructing the view to safely get through. We had to turn around and head home after one and a half hours of flying. I felt like all the odds were against me for going on this hunt.

We tried again the next day and made it through Lake Clark Pass without any problems. We were on our way! After six hours of flying and two stops to get fuel for the plane, we made it to Unimak Island. The island is known for poor weather, so we were pleasantly surprised when we landed and had great weather for setting up camp.
We started hunting the next morning. The first two days, we saw several smaller brown bears and one large boar. We decided the large boar wasn’t worth going after because he had rubbed fur. Then, on the morning of our third day on the island, Adam spotted a nice boar that was about 500 yards away and the wind was in the right direction for us to head after it. We got 150 yards away from him and then he saw us. I had to decide quickly if I wanted to take him. The bear started moving over to try to catch our wind and I got set up to take him. I got a better look at his head when he turned to smell us, and it appeared smaller than I would have liked. I decided to pass on him.

Over the next several days, we had a lot of horrible weather and saw mostly small bears. I started losing motivation. Several times, I was wishing I had just taken that bear on day three because I was cold and miserable and losing hope we would see anything better. On two occasions, we chased after a large boar, but we never ended up finding him either time.

The second time we attempted to stalk the large bear, we decided to continue on further away from camp and made our way to another beach. There were a lot of eagles around, and I wondered if that could mean there was a dead animal along the beach. As we walked further, we saw a dead orca. It looked like it hadn’t been there long, and it didn’t appear as if the bears had been feeding on it. Yet. We spent that day glassing near the whale, but we never saw any bear that was worth going after. We decided we would relocate camp the next day so we could be near the whale when the bears found it.

The next morning on our way over to the whale, Adam spotted a bear across the marsh on the mountainside. I saw it too and noticed it was moving slowly and deliberately, just as a large boar would be moving. We were able to keep our eyes on it as we headed over. The bear then bedded down for a nap on the small mountain. We knew the general area where he was, but we didn’t see him in the brush. At one point, we heard some sticks breaking, so we knew the bear was nearby. We stood in the swamp and waited at least half an hour to see if there was any movement from the bear. While standing there, we were both getting really cold. We persevered, though, as Adam felt it was worthwhile to wait until we could get a better look at the bear because we were in a good position if I decided I wanted to take it.

We started making our way along the swamp to try to get a better angle and see if we could spot the bear. Adam then saw what he thought was some fur. We waited a little longer and then we saw the bear moving. I pulled up my binoculars and then the bear looked right at me. Adam said, “Don’t move, honey.” My hands were getting really cold, but I stood still. I noticed the bear had a large divot in its forehead, which I knew from my research often indicated a large boar. He had a huge head, too. I knew I wanted him. Adam estimated he was 140 yards away. Once the bear looked away from me, I got down in position, lying prone in the swamp. When the bear turned broadside, I took my shot. He immediately started growling. It was crazy! After a second shot, the bear started rolling down the mountain. We were very excited! After a minute, though, he started charging up the mountain again like nothing had happened. We were shocked. Another quick shot was taken, and he rolled back down again. We waited a while and made sure he wasn’t moving and then headed up toward him. I was amazed how huge he was once we got up that close. We took photos and then turned him onto his back, which was very difficult. We didn’t have time to skin him and make it back to camp before dark, so we needed to come back in the morning.

The next morning proved to be challenging as we had to skin him on the side of the mountain. It took several hours, but we got it done. We sent a message to our pilot, and he was able to pick us up the next day.

I was sad to be leaving the beautiful, secluded island we had called home for two weeks, but I was grateful that I got my trophy brown bear despite all the obstacles we had to overcome to make it happen. The bear measured 9.5 feet squared. It was an incredible experience I will never forget.