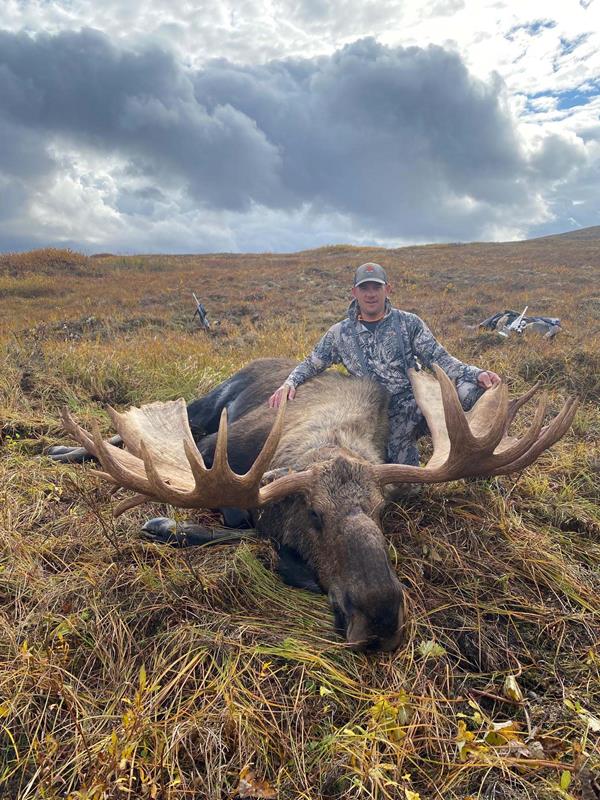 It had always been a lifelong dream to embark on an adventure to Alaska to harvest my bucket list animal, the Alaska-Yukon moose. Turning a dream into reality took years of research, planning, training, and saving. I became obsessed with obtaining as much knowledge as possible through reading articles in the Huntin’ Fool magazine and on their website and watching hunting videos on tv.

After weighing all of the different factors, I decided that a drop camp self-guided hunt checked the most boxes for me. Although this style of hunt met my criteria, it also came with its own complications and logistical hurdles. I am fortunate to have an unbelievable support crew comprised of lifelong friends and my family, led by my awesome wife, Julie, and two boys, Henry and Bode. Their support motivated me to avoid the naysayers and persevere by keeping my focus on accomplishing my goal.

Locating a reputable and trustworthy transporter in and out of the bush was at the top of the list. This process entailed composing a list of capable candidates and narrowing through an interview and review process. Once I was set on who I wanted to provide my transport services, I had to fit into his limited availability schedule. For this hunt, my lifelong friend and hunting partner, Jon, and I had to wait almost two years.

As everyone is aware, 2020 provided many obstacles, and one major one was travel. Mandates for proof of a negative Covid test within 72 hours of entering Alaska was a deciding factor on whether or not we would be allowed to perform our trip or the anticipated trip with 3+ years of planning and preparations would be delayed indefinitely. Fortunately, Jon and I both stayed healthy and received negative test results prior to traveling.

The day had finally come, and one of the most difficult aspects of the trip was leaving the family for a location that was only reachable by four airplane flights and satellite communication for an undetermined number of days. It was too late to leave this trip at the altar, and I was left to rely on my preparation and faith that everything would work out as planned.

The long travel allowed plenty of time to reflect on our studies and all of the advice received. One of the best pieces of advice I received was to trust my instincts. This would later prove true.

Jon and I finally arrived at our drop location in conditions that we were advised to expect and be prepared for. It was raining and windy. The flight in was bumpy and long as we detoured around the storm in order to travel safely. The Alaska weather lived up to the hype, and the conditions would worsen. We labored to clear a campsite and set up our tent, but we were fed by the adrenaline of what was now reality. Once our gear and supplies were under shelter, we performed other camp chores, such as creating a cistern to collect rainwater for drinking and cooking and organizing our living space within the tent. We did a little scouting before dark but were not permitted to hunt until the following morning due to not being able to hunt on the same day as our flight.

Our first night in camp was sleepless with the constant interruptions of the rain and wind battering our tent. I would like to say that I was so excited I couldn’t sleep, but the thrashing of the tent reminded me of the fact that we were sleeping in brown bear country.

Our first morning started with a hot cup of coffee and a quick breakfast as we gathered provisions for the day’s hunt. Our game plan was to get to a high vantage point and glass the area around us in hopes of locating a legal bull to pursue. Conditions were difficult to say the least. As we approached the summit, the wind had to be gusting 50 mph and there was a steady rain. The wind was nearly intolerable as we glassed, but to our excitement, we located a bull bedded with five cows approximately a mile away. A decision had to be made whether to retreat to camp and wait for better conditions or move closer to the spotted moose to better judge him. We picked a route and trekked ahead. This moose had something about him with character noticeable at a great distance.

After cutting the distance in half, we reassessed the moose and determined that the advice not to shoot the first moose we saw on the first day did not pertain to this one. Jon insisted that I stalk up closer to get into position to take a shot. From 227 yards, I worked to become stable with my rifle as the crosswind and rain pounded my left side. After what felt like an eternity, some of the cows came to their feet, enticing the bull to do the same. As he stood perfectly broadside, I realized that everything had come down to this moment. I flipped off the safety and squeezed the trigger. I immediately racked a follow-up round and put the bull back into the scope. Nothing appeared different. They all stood there as if I had not even shot. I remained composed and made an adjustment for the wind. I steadied my sights and pulled the trigger. He dropped like a sack of potatoes out of my scope as Jon said, “You drilled him! Put in another round.”

As the bull lay there, I quickly placed another follow-up shot behind the shoulder to ensure he expired as quickly as possible. As my best friend gave me a congratulatory pat on the back, I laid my face down on my pack, unable to contain the emotions of acquiring the experience that I always wanted. The grandfather that I never had the pleasure of meeting was an accomplished big game hunter, and I know he was smiling down on me. The stories of this expedition will long outlive me, and I hope they will inspire many generations to come to want to experience what I have been so blessed to do.

After getting to put our hands on the beast, we realized how special this creature was. He had character unlike anything I had ever seen, and his spread easily exceeded the 70" measuring tape I had brought. Now the real work began. We spent the rest of the day butchering the moose before making the two-mile trek back to camp. We returned the next day to pack all of the pieces to the extraction point at the top of the mountain.

It wasn’t long before we were repeating this process for the bull that Jon harvested. We were both very blessed to harvest awesome bulls. We spent another couple days in camp until the weather broke and turned beautiful and allowed us to be picked up to begin our long journey home.

Our success can be attributed to our preparation and maybe a little of the thing that no hunter would turn down – luck.