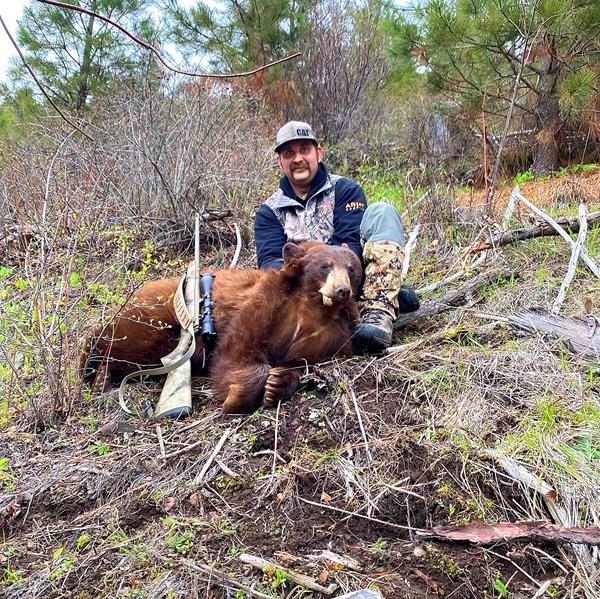 My passion for hunting started at a very young age through my mentor, my father. Every single moment I had I was following behind him in the mountains in every weather condition imaginable. Ever since then, being in the woods has been an addiction and a passion of mine.

The year 2022 is going to be one of those years that will be stuck in the back of my mind for the rest of my life. Every year, I put in for draw tags and pick up over-the-counter tags in different states, including putting in for my home state of Oregon where I reside in the northeast corner. This year, I was fortunate enough to draw a spring bear, a branch bull, and unexpectedly, a decent buck deer tag for a unit nearby. My father drew a spike bull tag on his second choice for the same unit where I drew my branch bull tag.

With how busy life can get, I knew I had a lot of work to do. Dad was only able to tag along with me for the elk hunt in late October. I would be taking the other two hunts on solo.

The opening weekend of spring bear season, you would have thought it was the middle of winter. With several miles of putting boots on the ground and hours behind the glass, I was able to connect with my very first bear. It only took one shot at 298 yards with my Browning X-Bolt chambered in 6.5 PRC. With about a month of tough solo hunting and finicky weather, it was a huge accomplishment. I had always had a dream of harvesting a cinnamon black bear, and I made my dreams come true.

Fast forward to the first week of October for rifle buck season. Hunting was extremely tough due to the hot temperatures. The first four days, I saw a few deer every day with one small buck that I decided to pass on. I started to get a little discouraged, but I knew that if I kept at it, my hard work would pay off.

On the evening of day five, I went up in a thickly-timbered draw where I always see deer in the off season. The walk was around 1,000 vertical feet straight up. I decided to take the whitetail approach and sit in a hidden drainage until the last minutes of legal shooting light. Before I got up to leave, I did one last scan and saw a lone deer about 200 yards straight uphill on an open hillside. I threw my binoculars up, and it looked like a big 3-point in the opening. I rested my 6.5 PRC over my pack and touched one off. The rest was history. I walked up to him, and he was a 6x4 buck with a bunch of junk coming off the base of the main beam and eyeguards. I immediately said a prayer and thanked the Lord for the wonderful opportunity.

A few weeks after that, it was time to go elk hunting. I had been looking forward to this hunt all year because I would get to spend quality time with my dad and a close friend who came down from Idaho to help out. Opening day, we woke up to six inches of fresh snow and frigid teen temperatures. It was perfect elk hunting weather. After scouting for four days before season and throughout the summer, we were feeling pretty confident. That morning, I passed up a small 5-point bull 40 yards away in the timber. It was hard for me to pass him up, but I had burned 7 preference points and knew I would have another opportunity.

Day two was another cold one. I was running behind getting to my spot and saw people walking in where I wanted to go. I decided to go to my Plan B spot. I spent the morning still hunting a steep draw and glassing a canyon where the draw ended. I came across some decent bull tracks walking back up and out of the draw, and I tracked them all day. I decided to sit and glass until the evening near what looked like their bedding area. After a few hours of glassing, we started to get cold, so my good friend, Zac, and I decided to hunt our way back to the pickup. We got to the top of the hillside, and Zac waved to me. I looked up and saw a cow elk where we were sitting earlier. Then a branch bull started to follow her. I got the bull to stop at around 100 yards away. I got my aim steady, and with two clean shots with my .300 Norma Magnum, he was down. Filled with excitement, we went back to camp to share the moment with Dad.

Once we got back to camp, Dad said he had filled his spike tag that evening too! We got Dad’s bull back to camp and then went to quarter up my bull. We ended up getting back at 1 a.m. and went to bed at 4 a.m.

Memories like these are the main reason I love to hunt. The harvest is great and all, but spending time in God’s country with family and friends is what makes the experience so much better.