The Road to Ibex 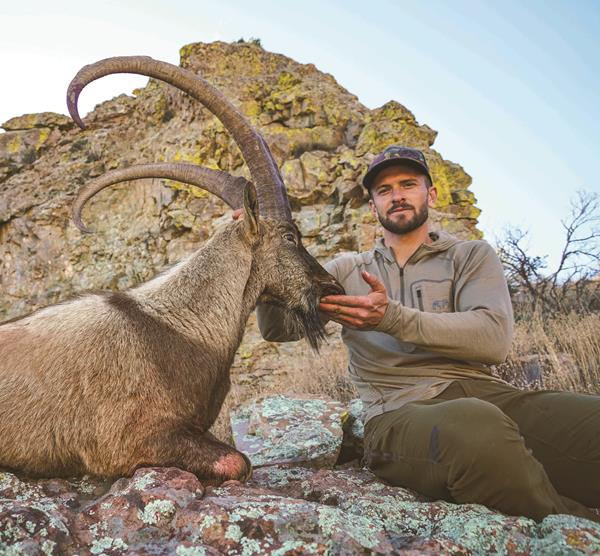 I was around Deming when the bumper of my 1997 pop-up camper fell off. In Arrey, the frame broke and the trailer folded like a taco. By some miracle, I drove another 200 miles white knuckling the steering wheel and praying that the last piece of metal holding this beat-up camper together would hold its grip. I knew it was bad when I heard the screeching sound of the trailer dragging on the speed bumps in my neighborhood. I limped into the driveway with a sigh of relief.

I’ve always felt fortunate to live in New Mexico. Fantasies of giant bucks, bulls, and rams run through my mind as time slowly passes between March and April. Every year, I log in to my Game and Fish account with crossed fingers. This year, I scrolled over unsuccessful applications in my account and saw a glimmer of hope in a lone green tab. “No way,” I thought. I was one of 25 applicants to draw a muzzleloader ibex tag in the Florida Mountains. With a rare tag in my pocket, I lied... a lot. When someone asked me if I drew anything, my reply was a definitive “No,” or “All red for me, brotha.” With great tags comes great pressure. I didn’t want tips, waypoints, or an awkward conversation when someone told me they couldn’t wait to head down there with me. The one person who knew of my good fortune was one of my closest friends and hunting partners, Jordan Burt. He enjoys suffering as much as I do and has been there on my best and worst days as a hunter.

As I pulled my trailer into the shadow of the Florida Mountains, a lone billy ibex ran across the road in front of me. I was hoping the hunt would be more challenging than this. My hopes were answered as ibex encounters became harder to come by.

I saw my first herd in a spot where no hunter would focus their binoculars. These animals defy gravity. They stand, scale, and jump off sheer rock faces that are completely vertical. This group contained a lone white billy. He carried himself in the way that mature males do when surrounded by females. I was mesmerized by his presence.

In such a small area, it didn’t take long before we became familiar with the other hunters. There was Bill, an older gentleman who told me to call him “The Governor.” He seemed to enjoy talking to hunters as much or more than hunting. He wore a set of vintage 7x25 binoculars around his neck and would intermittently pull them up to his eyes and check the mountain for goats while he spoke. One morning, he arrived as I was glassing. My setup resembled a magazine ad for Swarovski. I told him I hadn’t seen many ibex, and his response was that I needed better optics. He must have been doing something right because he had been on several stalks and missed a billy on the first day.

Then there was Martin, a bowhunter who spent four days camped on Gym Peak, aiming to kill his fourth ibex with a bow. We ran into him while stalking a big billy one morning. Martin sported tattered pants and off-brand camo and traversed the peak with only his bow and a yucca stalk. You couldn’t help but root for the guy.

On Saturday, we went to a different part of the mountain range. We were excited to be alone as we hiked up a ridge to glass. I caught movement midway up the mountain and was thrilled to see a giant billy. He had a beautiful white back and horns that curled down toward his body. This goat was special. We watched as the sun set and felt confident that he would be in the same area the next morning. As we hiked down the ridge, I felt relieved knowing that we had this ibex to ourselves, but then we met Mike. He was gruff and had the look of someone who has been there and done it many times. He was an outfitter and explained that his future son-in-law, Trey, was the lucky tag holder.

“You guys see anything?” Mike asked.

With what was becoming a bad habit, I lied. “Nothing, just some nannies way over there to the west. How about you?”

“Nothing, but I’ll be here tomorrow,” he declared.

“We may be here too.” As we climbed into the truck, Jordan knew that Mike and I were both full of it.

The next morning, we arrived at our glassing spot as the lights of Mike’s truck appeared in the distance. It was going to be a race to find the herd. As the sun crested the horizon, I noticed an odd shape on a cliff face. “I got ‘em!” I whispered to Jordan. “Let’s go!”

We tried not to tumble over as we made our way down toward the truck. Our plan was to drive closer to the herd and then I’d continue on foot. As we approached the vehicle, I could see Mike focusing his spotting scope on the ibex.

Mike wouldn’t look at me. “That’s a bad idea,” he said. “They’ll see you from a mile away. They’re gonna take off when that sun hits ‘em.” Mike scrambled to come up with reasons for me to stay.

Jordan dropped me off and headed back to our glassing spot. I had heard stories regarding the weariness of ibex, so I was slow and methodical hiking up the canyon. As I closed the distance, I heard rustling from something ahead. I saw a black object approaching. Out of nowhere, a dog lowered his shoulders and fixed his gaze on me. I knew the jig was up. The dog barked. “Shut up, Finnie! Don’t worry, he doesn’t bite,” the hiker said, holding onto his snarling dog while I passed.

Afraid to look up, I slowly raised my binoculars. The ibex were gone. I started to turn around, dejected, when I got a text from Jordan. “They’re moving right. Try to get above them.” This was a tall task. I needed to gain 1,000 vertical feet before the goats potentially reemerged on the backside of the peak. I hustled up the mountain, cresting the ridge 30 minutes later. I saw the silhouette of a nanny. I set up my gun, and my rest was solid. I ranged. 250 yards. Perfect. The billy would appear any second. Kaboom! “That definitely wasn’t my gun,” I thought. Mike’s hunter had taken a long shot from the bottom of the canyon. I didn’t have time to feel sorry for myself as a nanny bounded up the ridge in my direction. She hit the brakes a few feet from my gun. Her diminutiveness shocked me, and I froze as she evaluated my presence. She bolted. I knew that if the billy was still alive, this was going to be a close shot and it would happen fast. I adjusted the zoom on my scope.

The brush hid the herd from sight as I listened intently and tried to guess where they might appear. I watched as the group began to climb a rock outcropping to my right. I slowly raised my gun. The tips of the billy’s horns began to show, and I settled my crosshairs on his chest, waiting for him to turn. There was no time for self- assuring inner dialogue or my pre-shot mantra. He veered left, and I shot. The recoil was intense, but I saw his white body plummet in my periphery.

“White back down,” I texted Jordan, knowing he’d make his way to me. I approached the billy in disbelief. His white hair glistened, and his horns arched backward.

Jordan nervously hiked down the hill, unsure of what Mike’s reaction would be. “Did he get him?” Mike asked.

“He did,” Jordan responded.

“So did Trey!” Mike shouted as he bear hugged Jordan. Apparently, there were two billies in the group and Trey shot the first one that presented himself.

As Jordan broke down the ibex, I found myself in a rare moment of idle. I sat in the warm sun and tried to picture Mike hugging Jordan, unable to work it out in my head. Mike didn’t seem like the hugging type.

Perfect hunts are never perfect. They require moments of struggle, uncertainty, and chaos. They’re adventures that you can look back on knowing you lived your life to the fullest. Perfect hunts end in a way where you catch yourself saying, “What an adventure!”

If you’re reading this now and I lied to you, I hope you can forgive me. If not, it was worth it.