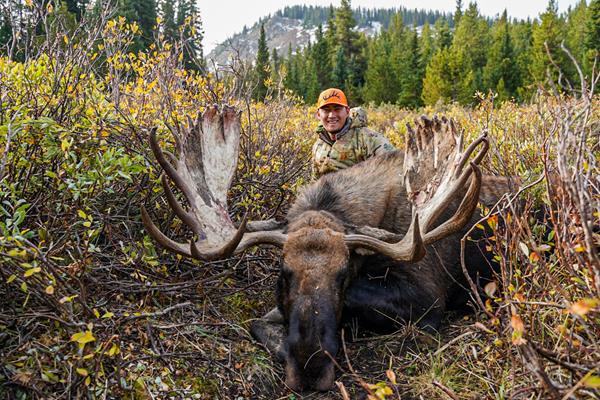 When I was a young boy at the age of 12, my father asked me this simple question, “Which of the big three do you want to apply for –bighorn sheep, moose, or mountain goat? You can only pick one.” This was a no-brainer for me. “Moose,” I chirped, knowing he would be putting in for bighorn. Flash-forward to age 26 when I drew the once-in-a-lifetime Shiras moose tag. I could not believe it. Not only did I just draw this tag, but we were also already going to Alaska to hunt moose self-guided in early September. I know, you already dislike me. Trust me, I could not believe it either. Long story short, my dad and I went to Alaska and each harvested our first moose and had the trip-of-a-lifetime.

Now let’s rewind to the summer. To me, the opportunity to hunt Shiras moose meant the world and I knew I had to spend all my time off in the summer scouting. My main focus during the summer was covering country. I had a good feel for the area, so I focused my efforts on the obscure habitat, mainly learning road systems and locating cows. I had some nice mature bulls located during the summer but never could find “the one.” I knew the trophy potential in the area, and I figured my odds would increase when the cows came into estrous. The season would begin on September 12th, starting with archery and muzzleloader. I chose to use the muzzleloader because why not? By the end of the summer, I had spent a total of 25 days scouting and ran eight trail cameras. I hoped my efforts would pay off, but there is never a guarantee in this game.

After we returned from Alaska, it was game time. With the season starting in five days, I knew I had to give it everything I had. My work schedule allowed me to hunt half-days almost every day. My plan was to spend every chance I had looking, even if it was only for a few hours. On opening day, my girlfriend and I rolled in and set up camp. Our plan for the weekend was to glass the large meadows in the mornings and evenings and check trail cameras during midday. We had a great first few days consisting of encounters with younger bulls and seeing plenty of moose. It was only a matter of time before a mature bull would show up.

On day five, my father and I found ourselves 80 yards away from a mature bull I had located during the summer. Sitting on a small knob glassing, I heard a bull grunting a few hundred yards away. We quickly grabbed our things and moved closer and began to call. Within minutes, a beautiful 44-46" bull came walking in. He had two brow tines on one side and one brow tine on the other. Standing at 80 yards, we relished in his beauty. However, knowing I had seen him previously in the summer, he just was not quite mature enough. He began to walk in the willows grunting and racking as he wallowed along. “Wah, wah,” we heard from the opposite direction. We looked at each other and knew another bull was approaching. We grabbed our things and moved over to enjoy the show. A smaller bull came trotting in the meadow following his cows, trying to show his dominance. The mature bull came into the opening sporting a few cows of his own. The two bulls circled each other, grunting and racking, showing off for us, or it could have been for the ladies. We sat there and watched them until dark. The noises we heard from the moose echoing throughout the valley were incredible. I knew from that moment on my hunt was fulfilled.

On day six, I found myself alone driving in the dark thinking of where I should go. My mind was racing, thinking of the options. Alone, we tend to second guess ourselves more without the reaffirmation of another. However, when there is success, the cake tastes that much better. On a whim, I decided to check out an area where I had not been for quite some time. On the way to the glassing point, I spotted a couple of cows and a big bull feeding in the creek bed. Looking at the bull for a few minutes, my heart was racing and it was go time. I snuck through the timber, and as I approached the creek bed, I heard the echo of “Wah, wah,” and the bull’s antlers racking the willows. Each time the bull grunted, clouds of steam rolled out of his mouth. I crouched down and crawled to my last piece of cover. Here he came up the creek with his six cows 40 yards away. I slowly put the gun on my knee, cocked the hammer, and let it rip. The smoke fogged my vision, but I could see the bull still standing and starting to wobble. I scrambled to reload as I was not going to let this bull get out of my sights. Kaboom! The muzzleloader barked again. The bull took two more steps and hit the ground with his head up. My mind was racing. I reloaded again, not wanting to take any chances. The bull somehow got back to his feet and I let him have it one more time. He took a few more steps and expired.

I approached the bull and sat there in disbelief. I thought to myself, “How did this happen?” Tears of joy began to flow as I admired his beauty. I had accomplished my dream. Everything felt surreal. The hunt went picture perfect, and I cherished that because oftentimes our efforts go unrewarded. I reached out for help as I began to cut up the moose. Thankfully, my mom and my friends from AEI Outfitters came to help pack him out. The hunt was everything I could have ever asked for. I left the mountain with a full heart and a freezer full of meat.

These tags are weird. As much as we do not like to admit it, there is always some pressure when drawing a limited-entry tor once-in- a-lifetime tag. It can be self-made pressure or pressure from people around you. We begin to believe that our time spent waiting should result in our picture-perfect hunt, but that is not always the case. In fact, the majority of the time it does not work out how we want it to, but that in and of itself can make the hunt. It feels that after these long waiting periods we create all these expectations of the hunt. Go in with no expectations and live the full experience because it may not happen again. There have been plenty of times where my expectations were high and no success at the end of the hunt left me feeling empty. At the end of the day, the hunt is not about the harvest, it is about your time sharing these experiences with friends and family. Appreciate the time in the field, good or bad, because when it’s all said and done, these are the memories we will look back on.