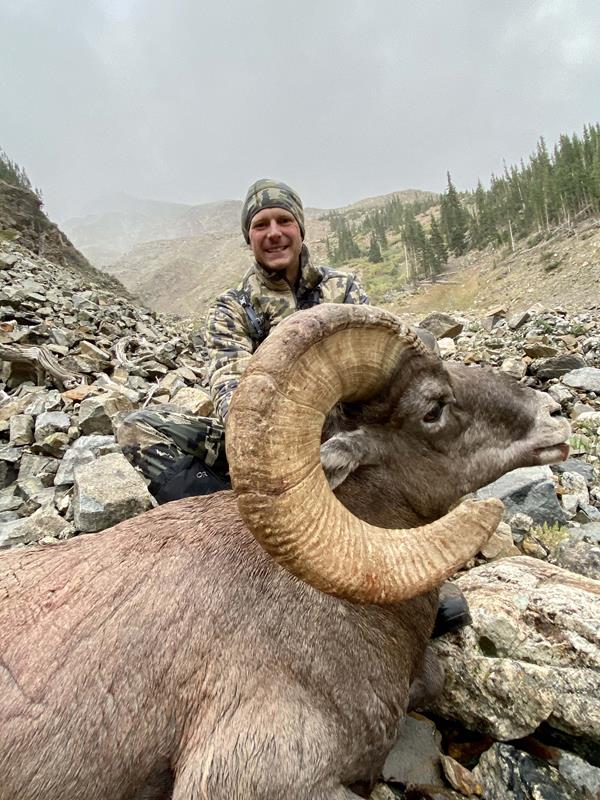 “You are going to miss our anniversary!” This is the response I received from my wife when I informed her I had just bought my ticket to Alaska to go on my first sheep hunt.

Epic fail! Eighteen years ago, I learned that it might be best to consult with your new wife before choosing the exact dates. Yep, I missed my first wedding anniversary. I celebrated it on a mountain in the Wrangells of Alaska alongside my two older brothers. Eighteen years later, I still didn’t learn. Don’t check your email on a date with your wife!

“Congratulations, you drew a Colorado bighorn sheep tag,” was the email that brought our lovely date to an abrupt halt. “Sweetie, I hit the lottery and drew a once-in-a-lifetime sheep tag!” Our levels of excitement couldn’t have been further apart. We were in the thick of the Covid hysteria. My poor wife was homeschooling our three daughters due to the state being shut down, and the thought of me leaving and being consumed with the planning and preparation of a huge hunt wasn’t exactly what she was ready for. She warmed to the idea over time as she realized the excitement I had for this dream hunt that was 15 years in the making since I began applying for this tag. The next communication was to a couple of local obsessed hunters – Sam and Luke. An invite was extended, and without hesitation, Sam was in. He had spent last November in Colorado with his dad hunting the single non-resident Desert bighorn sheep tag.

Three days later, I reached out to Robert Hanneman. He quickly hooked me up with a contact who was worth the last 12 years of membership with Huntin’ Fool many times over. I was given the name of Mark Murphy through the Member Draw list. Mark lives about six hours from the unit and had this same tag in 2018. He was successful on a beautiful 163" 9-year-old ram. I contacted Mark, and we hit it off right away. We spent many hours talking and texting over the next three months as I prepped for my scouting trip at the end of July.

The information from Mark was invaluable. He even offered to meet me and my 12 and 13-year-old daughters in the unit to help show us around. Coming from Wisconsin and nearly 20 hours away, this was a huge boost in confidence to do this hunt unguided.

Upon arriving in Colorado on August 1st, I met Mark in person. After a few hours together glassing, I asked Mark if he would be interested in joining me on the hunt in about five weeks. He checked his work schedule quickly and was free September 7-10. Amazing! The opener was September 8th.

After the memorable scouting trip with my daughters in August, I was asked by Kurt Walbeck, the host of Outdoor Bound TV, if I would mind having a videographer accompany me on my epic hunting adventure. After thinking about that for about three seconds, I had a fourth member of the hunt.

I met a great new friend, Zach, on Friday, September 4th. Within an hour of meeting, we were driving from Wisconsin to Colorado on Friday into Saturday afternoon. After delays from wildfires, we made it to the trailhead and hiked the five miles into camp, setting up our tent in the dark at 10,900 feet. When we left the truck, it was 80 degrees with a storm projected for Tuesday (opening day). Sunday and Monday were spent hiking up and down the river valley, climbing 700 feet in elevation to glass the mountains for 12-14 hours each day in search of a ram. Monday’s visibility was awful. It went from about 10 miles to under 1 mile due to smoke rolling in.

My buddy, Sam, messaged me from the south side of the unit. He had only seen small rams and ewes. He had slipped in the evening before having also made the drive from Wisconsin a day later. He was going to make the three-hour drive around the unit and join us. Unfortunately, a few hours later, the message came through that broke my heart. His truck succumbed to the atrocious mountain roads and broke down 25 minutes from the trail. He had to get towed and would miss the hunt.

As Monday night was coming to a close, Mark hiked into camp. He climbed up to glass, and with about an hour and a half of light left, he found a group of seven and a group of nine rams. With the impending storm brewing, the sheep were coming out of the woodwork. I met Mark and Zach back at camp at dark and heard the great news. As we looked over the pictures Mark took, a game plan started to come together that night to harvest the biggest of the 16 rams for the opener on Tuesday. Shortly, the predicted storm started to come. Between the howling wind and excitement of the next day, I only got a few hours of sleep. As dawn came, the three of us were back glassing up the valley where the sheep were seen the night before. Within minutes, Mark spotted the group of seven rams. Zach and I took off across the river and started up the mountain to try and close the distance. As we got to about 600 yards, the snow hit, causing visibility to drop to about 100 yards. With the visibility shot, Mark caught up with us. The three of us then spent the next 30 minutes crawling over trees and around the aftermath of an avalanche. Then we climbed about another 300 feet up through the pines until we were able to crest out and found the sheep across the valley at 11,500 feet. Mark and I threw our packs down, and I ranged the sheep while Mark whipped out his binoculars and said the big one was in the lead. Within seconds, my scope was on him. After one shot at 200 yards, the 9-year-old ram ran about 50 yards into the trees and emerged by rolling 100 feet down the mountain. What a sense of elation! I had harvested my first sheep.

Then the real fun began. After taking pictures of my ram, we started caping him out and deboning the meat. While we were doing this, the wind picked up even more and trees began cracking like gunshots as they were falling over in the valley by camp. By the time we got back to camp with full packs, the snow was accumulating. Trees were laying all over by camp, several narrowly missing our tents. Between the sideways snow and howling wind, we were chilled to the bone. After some food and Mark skillfully caping the skull like an expert taxidermist, we crawled into our tents. The temps dropped into the teens, and the howling winds put windchills near zero.

Fourteen hours later, we emerged from our tents to about six inches of snow. Luckily, the storm was over and we could start packing up for the five-mile hike out. What a difference in four days! It was 80 and sunny hiking in and 30 with snow hiking out. With 115 lbs. in my pack, the hike out was exhilarating and miserable. Crawling and climbing over freshly blown down trees, slipping and falling with the pack on will be a memorable experience.
I’m incredibly grateful for Zach and Mark! They were studs hiking out with heavy packs as well. Their help and friendship will be something I will never forget and will be eternally grateful for. I am especially grateful for my understanding wife and her understanding for my mountain sickness.

To top it off, the hunt will air on Outdoor Bound TV August of 2021 and will be on YouTube as well.