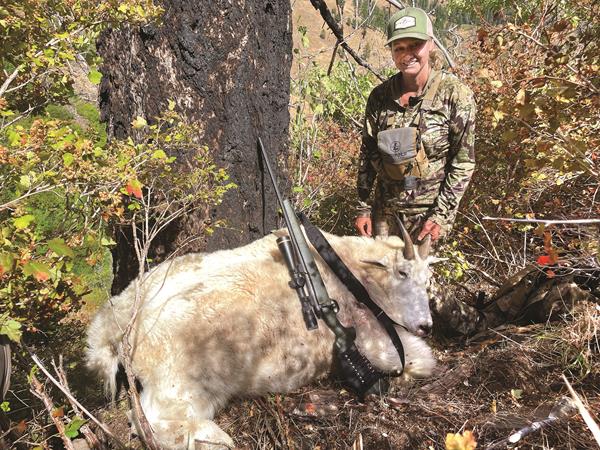 I was on my way from our Central Oregon home to Sheridan, Wyoming to host an Advanced Rifle and Long-Range Shooting Ladies Camp with my husband, Randy. We were excited to see our friends and colleagues, Brenda Weatherby from Weatherby and Nic Kytlica from Leupold, and meet our students from all over the United States.

We stopped for breakfast at a cafe in Burns, Oregon. As we waited for our coffee, Randy got his phone out to check the Oregon Department of Fish and Wildlife app for his Oregon draw results. I was getting my own phone out to check on mine as Randy announced that he had drawn nothing. I was still fiddling with my phone to locate my own results when I realized Randy was looking right at me in absolute silence. With a serious expression, he said, “You drew a mountain goat tag.” I responded with a laugh, “Yeah, right!”

The ODFW site was finally starting to load on my phone as Randy held his screen up to me. “You drew a South Wallowa mountain goat tag, Lady!” I didn’t believe it. There must be a mistake. The odds of drawing this once-in-a-lifetime tag are overwhelming with less than 25 available in the whole state on any given year, but there it was, a mountain goat tag for me. The reality was sinking in fast, and my mind was whirling. “What if I can’t do it? I’m getting older and full of arthritis!” But before I blurted that out, I thought, “God gave me that tag. There is no way I could have drawn it without Him, and if He brings me to it, He will bring me through it.” With that, my worrying was over.

My tag opened on August 1st and ran all the way through the month of October. Randy and I marked off the calendar for goat hunting during the entire last week of September. Knowing I’d want support in the field, we put together a crew of hunting friends we knew we could count on. We had hunted other species in areas where there were mountain goats but didn’t really know much about them, so we started studying, poring over maps, and talking to others who had hunted them, gleaning all the information we could.

In mid-August, we packed up for a couple days of scouting. We got in late, and that evening’s short scouting didn’t turn up anything, but we made a plan to glass at sunrise. At daybreak, we were standing on one of the steepest rims I have ever set foot on, and I marveled that God had created this vast, beautiful awesomeness of rugged mountains and forests. Within moments, Randy and I had both spotted a white dot in the distance, but at over a mile away, there was no way to tell if we were looking at a billy or a nanny even from behind the scope. We decided we should get closer.

Five hours later after trekking up and down a nearly vertical, barely-there trail, we were indeed closer. The first descent was 2,000 feet of rock and shale. At the bottom of the trail, we entered some of the thickest creek bottoms I had ever found myself in. We wrangled our way through it and then up 800 yards on the next hill, down 800 yards, through another tangled creek, and up another 300 yards. There was the white dot, and it looked like a great billy only 300 yards across a canyon. We watched the billy awhile, and then I asked the question you don’t ask on a scouting trip, “Randy, is he a shooter?”

He was quiet a minute and answered, “Yeah, Lady. He is a shooter.”

At this point with cramping in both legs and feet, I was not sure I would make it out of here well enough to ever consider coming back again. I pulled up my rifle and put my crosshairs on the billy. As I squeezed the trigger, I realized that it was not level where the ram was standing. My shot rang out, and the ram took two steps and started to roll. He tumbled through some brush and then was held fast by the twisted remains of an old burnt tree. I started to shake and cry. I had just shot a mountain goat!

I was in awe when we walked up on that magnificent animal. He was so big with massive shoulders and a long donkey head. I couldn’t quit looking at him and thanking God for this opportunity. At over 300 pounds, we couldn’t move him, so we tied him off to a bush and got to work in the tight quarters of the narrow ledge. We took our time as we wanted a full body mount, and after a lot of blood, sweat, and a few curse words, we had him quartered up and in bags.

By now, the sun was more than halfway across the sky. Randy said, “It’s early evening, and we have a good seven-hour hike out. There’s no way we can make it before dark, and it’s not really intelligent to hike this terrain in the dark.” He suggested we go straight up 1,000 yards as the crow flies, but we couldn’t tell how tough the terrain might be from our vantage point. I was not excited about any of our options, but I once again replaced fear with faith and said, “Let’s go.” We scrambled up and got close to the top, but with dark coming on, we didn’t have time to look around. We decided our best bet was to go back down while we could see.

Here is the most embarrassing part of this hunt for me. Through our hunting camps, Randy and I have taught hundreds of youth and women of all ages how to hunt and prepare for any situation, including what to put in your pack. I hadn’t looked at my pack because “we were just on a scouting trip.” It didn’t take long to take stock of what we had – three Mtn Ops bars in my pack and a Snickers in Randy’s. Our waters were about half gone, and though I had only a light jacket, Randy had none at all. The realization that we were not prepared was humbling, to say the least. We went back down to the creek and filled our waters. We shared a dinner of Snickers and one Mtn Ops bar and then pretended to sleep. I started to fall asleep a couple of times, but in this steep terrain, as soon as you relax, you start sliding downhill.

It wasn’t long until we both started shivering and cramping, so we donned our packs and started hiking uphill through the dark with headlamps to warm up. After about 45 minutes, we stopped again.

This time, we took out a set of quarter bags and put them over us, which helped a little, but it wasn’t long before we were shivering and cramping again. The packs and headlamps went back on, and we headed uphill once more. Randy found some big rocks near a ledge we knew we would need to go down come morning, and we spent the rest of the night there.

We put the headlamps on at 4:30 a.m. and got started on all the descents and ascents to get back out. It seemed to take forever, but we made it. After that night, I have never felt closer to God, truly blessed by that peace that passes all understanding.

Twenty-six hours after we had started hiking to take a closer look at a white dot, we were back on level ground with a beautiful billy waiting on us below. We needed some help to get that goat out. Randy called in some of our buddies and told them, “After a night on the slope, I am not going back in there today. I just don’t have it in me.” We were blessed again when six friends showed up and brought that goat out to us, especially when they were sitting on tags for opening weekend of archery elk and deer. You have no idea how grateful I was! They are true friends who dropped everything to help pack a goat out of Hells Canyon. They are great men and hunters whom I will forever be thankful for – Dan Daggett, Fred and Heather Daggett and their son, Wyatt Daggett, DJ Fox, and his son, Taylor Fox.

In the meantime, I called our crew of friends who had planned to join us on the hunt to let them know about the goat and the free week they now had on their calendars. Everyone said, “I thought it was just a scouting trip!”

When you hunt that hard, hike that far, keep your faith in the face of discomfort, and pull up on a great goat like that at 300 yards, you don’t just back out. Lovely though it is, I don’t want to ever go back into Hells Canyon. We learned a lot, went well beyond what we should have done, and leaned on God. Along with it, I got a mountain goat-of-a-lifetime.