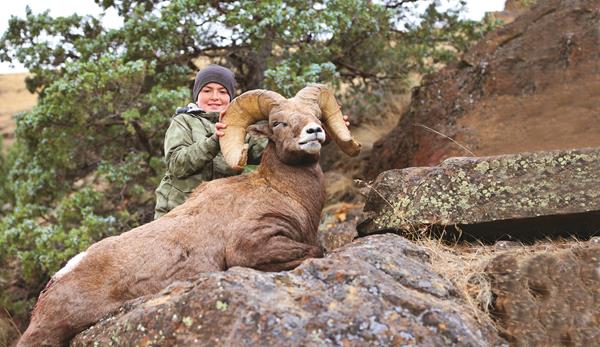 My dad has been putting me in for tags for a couple of years now, but I hadn’t been lucky enough to draw any tags. However, that all changed this year when I drew a Utah elk and deer tag, a Colorado deer tag, and an Oregon sheep tag for the John Day unit. My dad told me the odds of drawing were slim to none and how lucky I was to get a sheep tag. That just made me even more excited. We decided that with school, we were only going to spend a couple of days hunting elk and deer. We ended up getting my sister her first deer, but I didn’t have any luck.

Before I knew it, it was time to head to Oregon. My dad had called a bunch of people, and we decided to secure some private land instead of floating the river. My dad and older brother left two days before us to go check things out and see if they could find any sheep. The day before the hunt, my mom, two sisters, and I headed up to Oregon and got there late that night. We found out that they had been seeing a lot of sheep, which got me really excited for the opening day of the hunt.

On opening day, we split up with my one sister, my dad, and me going to the bottom of two canyons where my dad and brother had watched a good ram chase ewes the day before, and my mom, my brother, and my other sister went on the top to spot for us. Not 30 minutes into the hunt, they found the targeted ram up on top right in front of us. With us being in the bottom, we started hiking up to find them. We got to a steep place and told my sister to go further down the canyon before she started up. Well, that put her out in front of us. As we were doing that, the sheep came out right on top of us. We were only 80 yards from them, but my sister was still about 15 yards in front of my dad and me. We tried switching places, but the sheep busted us and went around the corner and over into the next canyon with no sign of stopping.

It took us a couple of hours to hike out of the canyon and meet back up with everyone. We then decided to head over into the canyon where the ram and ewes had gone to see if we could find them again because they didn’t seem to be too spooked. When we got to the next canyon, the sheep started coming out from everywhere. We watched three good rams come over the top and work down in the bottom with a bunch of other sheep. My dad and I headed down after them, and when we were getting closer, they went into some trees. We only needed to go a little further to get set up on them when a small ram came out and walked right at us. He wouldn’t leave and just kept getting closer, trying to see what we were. While he was doing that, the other sheep headed out the bottom and up the other side, which was really steep and not a good place to go after them, so we backed out.

The next day, I woke up bright and early to get in a good position on top right at first light back in the canyon we had started out in the day before. We did the same thing with my mom, my brother, and my one sister back on top of the same canyon and us staying on top of the other one. It didn’t take long for them to spot a ram going around the canyon right underneath us. As we were working our way down, we thought we were right on top of him, but he had beaten us and was over on the next ridge working his way around the corner. We hurried back to the four-wheeler and went back around in front of him, hoping he would come around to us. Instead, he dropped down in the bottom of the other canyon where we had seen the three good rams the day before. It didn’t take long to find those rams. They were all in the bottom chasing ewes all over and fighting each other like crazy. The new ram joined up with them. They never would hit heads like we wanted them to, they just pushed and kicked each other around.

We watched them for a while and decided to go around and drop into the bottom. When we got where we thought they would be, my dad and I snuck up and around the corner. However, they weren’t there. We were looking around and found them moving up the canyon, so we got set up and found the biggest one. When I shot, it hit right in front of him, sending him into high gear up the mountain with all his ewes. He worked back around the mountain, so we worked back around to where he had settled back down. We got set back up, and this time, I shot just over him. He took off and ran all the way across the mountain until he got to the end and realized the other sheep went the other way. We watched him turn around and come all the way back. It was crazy how fast he could go up that steep country and all the way back across. They all regrouped and stayed up high. We watched for a couple of hours. Other rams would come out of nowhere and check them out and then move on. Finally, they moved out, so we headed out too.

By the time we got out, we had just enough time to check one more place. As soon as we got there, we caught a ram running across the top. He had started to drop into the next canyon. We hurried over and found him sneaking around the next canyon. By the time we were in a spot where we could see him, he had snuck around the next ridge. We got set up, and when I shot, he went straight down. Everyone was saying I got him. I was really excited, but then we saw him trying to get back up and lost him.

By the time we got over to the place where we thought he was, it was getting pretty dark and we couldn’t see him or blood. We decided we better leave him because we didn’t want to push him further down the canyon and risk someone falling and getting hurt in all the rocks. It was hard leaving, wondering what had happened. That night, I hardly slept thinking about all the possibilities of what he could have done.

I was up early and ready to go. We went straight there again, and it only took a couple of minutes to find the ram. He had only gone 30 yards and flipped over backwards, landing in one of the only trees on the mountain. It was such a relief to know that he was there and that we wouldn’t have to go searching for him for hours. I was also so excited that I had shot my first big game ever. Seeing it up close was so cool. It was so much heavier than I thought, and getting to put my hands on him and having my whole family there for the whole thing was a once-in-a-lifetime moment. We took a lot of pictures and then packed him out whole for a full body mount. I hope shooting a sheep for my very first animal doesn’t ruin me but instead turns out to be just beginner’s luck. I also hope it’s just the beginning of a lot of good memories and a lot more adventures.