I'd Rather Be Lucky Than Good 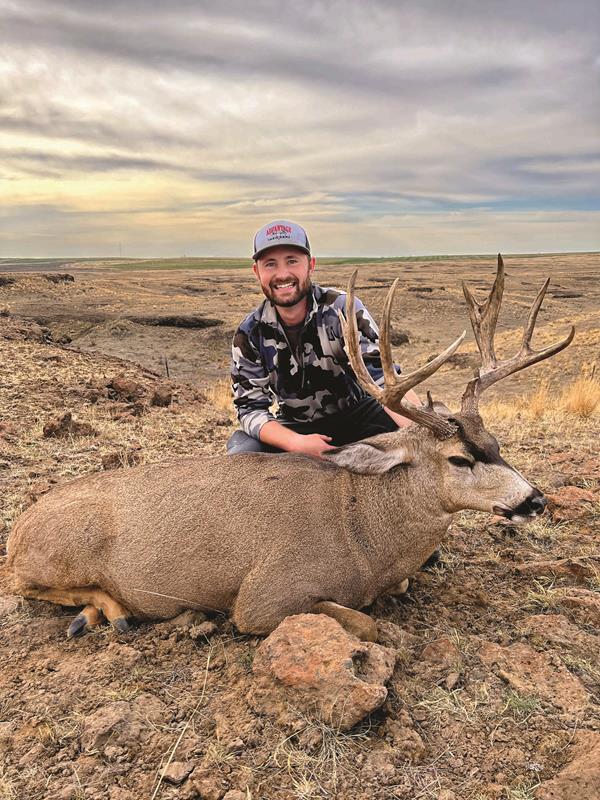 Hunting season 2021 was going to be a new test for me. My wonderful wife and I welcomed our first daughter into the world in May, and this would be the first hunting season with added responsibilities for us. Going into the season, I was lucky enough to draw a sheep ewe tag in Washington and then also drew a multi-season tag that allowed me to hunt deer with all three weapon types. My best friend and hunting partner, Tanner, also had a multi-season tag, so we got to work looking for bucks to chase during archery season. I am typically not the type of guy to hold out much for bigger deer as generally where we hunt there aren’t very many bigger bucks. We found a bachelor group of about 15 bucks all hanging together that would feed in the farm fields and then bed out in the sagebrush on a daily routine. We chased those bucks all over the countryside, but for some reason or another, we were never able to close the deal.

Tanner also had a newborn baby at home, and for muzzleloader season, we were only going to have a couple of days to hunt. Our days were pretty uneventful as we had really messed up the bucks’ patterns during archery season. After work one day, I decided to go out with a different friend, Nick, to look for bucks in a different area than where we had been hunting. We did not see much, but right at last light, we did find a buck on neighboring property that was as big of a 2-point with eyeguards as I had seen before. He was right next to a property we had permission to hunt on that had a great bedding draw in it, so we knew where he would be the next morning. I hiked into the area, and as I was creeping over the hilltop to get a view of the big draw, the buck jumped up and ran up the hill about 30 yards and stopped. I pulled up the muzzleloader, settled, and shot. When the smoke cleared, the buck was running off unharmed. I had shot right over his back. I was deflated. I had some pressure from the wife at home with our daughter that I really needed to get a buck so I could be at home more, and when I finally had an opportunity, I blew it. It was at this point I told Tanner that as long as we kept working at it and making smart decisions, it would all come together.

Once muzzleloader season was over, I had my ewe hunt to look forward to. Opening day was the same as opening day for rifle deer season, so the plan was to make a quick day trip to find a ewe and then get back home to chase deer. Tanner, my dad, and I hit the road the night before sheep season and were able to hike up a canyon and find a ewe and a ram all the way at the head. They did not give us much of an opportunity before they ran back into the bottom and never came back out. I had hunted some of this country before, and this particular canyon always held sheep, but this year, there were hardly any in the area.

The next morning, we decided to head further into the unit to find a different area that might hold more sheep. We were on the highway headed up into new country when Tanner looked out the window and spotted a herd of 20-30 sheep about 100 yards off the road. We kept driving and parked at the nearest turnout and worked our way back to the sheep. We ended up bumping them up and over that ridge, so we tried to parallel them to keep on the herd. As we were doing this, we started glassing more sheep up, including a pretty nice ram. Once the sheep all settled down, we got down on the pack, and once we verified that I was looking at a good ewe, I took the shot and we had a sheep down! We got up to the sheep and celebrated, took some photos, and packed her out. I hope to return to this country one day with a ram tag in my pocket.

With the sheep hunt taken care of, we headed back out in search of some of the bucks we had chased during archery and muzzleloader season. My wife made sure to remind me that I had been hunting maybe a little too much that year and that it was time to harvest a buck and be at home.

With that in my head, I decided to shoot the first legal buck I found that day. Deer sightings were a little slow that morning, but we were able to get a buck with Tanner’s wife, Carley, and she was ecstatic! After that, we had found one legal buck that I knew I should go after, but he happened to be one of the smallest and youngest bucks around the area. I really wasn’t ready to be done hunting yet, even though my wife’s patience was wearing thin.

About the time I had decided to just try and kill that deer, Tanner piped up, “I found another one all by himself out in the cliffs. The heat waves are terrible, but I can see antlers from here, so he has to be at least a legal buck.” That solved the problem for me! We headed off after this buck knowing there was no way he was as small and young as the buck we were leaving behind. We came around the final canyon that would lead us to where we wanted to pop over and find the buck and started to slow down. We peeked over the hilltop to locate the buck and were very surprised to see this was not just another buck. He was a great mature buck, which was pretty rare in this area. We backed up, changed our game plan a little, and worked over the cliff edge about 130 yards from where he was bedded. As old, wise bucks do, he was onto us and jumped up and began to work out of the cliff bottom. Tanner knew this area extremely well and said, “Just wait. He is going to pop out on top of the cliff just to the right of where he was bedded.” Sure enough, he followed that path and stopped to look back at us. We were ready, and I was able to get off a good shot and put him down. We still were not quite sure what we had, so we headed over to the buck and were shocked when we found a massive, bladed old buck with an awesome set of double eyeguards.

It could not have worked out better for us in the long run. We continued to hunt the right way and made good decisions, and it paid off for us big time. All it took was some good luck and being in the right place at the right time. I’d rather be lucky than good! I can’t thank my wife, Morgan, Tanner, and Carley enough for all the help and time they have given me to chase my passions and to my dad for showing me the right way in hunting and fatherhood.