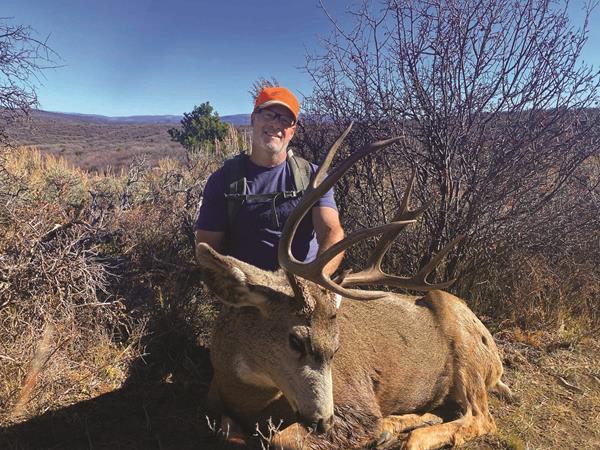 This was another family “Hunt-Cation” and definitely more about the journey than the destination! 2021 had been a good year with two out-of-state tags drawn by the old man (me). The wife (Sherry) had shot several animals, including a red deer stag, the boy (Hunter) had shot a few, including a fallow buck, and the girl (Reagan) had her heart set on a whitetail buck. Hence, we had tons of good, nutritional meat, including an antelope buck from Nevada and a mule deer buck from Colorado.

This hunt was the Colorado third season rifle tag and could have been an exceptional hunt depending on weather. However, it was unseasonably warm, which was great for the family vacation and travel portion but not so much for the mule deer hunting and migration. We saw plenty of wildlife and had an awesome adventure, but the bigger bucks had not migrated in yet. There were a few locals that were worthy, and yes, the one that got away.

We saw a lot of young bucks and the beginning of rutting activity. More often than not, if you found does, the bucks were nearby. We saw a substantial number of hunters, so there was plenty of orange to go around. Also, there was plenty of oil/gas activity and enough private land issues to make it interesting, especially when things were slow and we were catching deer moving in and out of BLM, on and off the fields, which were both private land as well as BLM along the route 5 corridor. Navigational devices are a must.

We had scouted the day before season, and as usual, everything changed opening day. We were scouring Topo maps and onX daily, looking over new country, making plans for the morning and evenings, and climbing mountains. However, most days, everything seemed to change once we got our plans set. There were probably more hunters than animals and the conditions were not conducive, but that’s public land hunting. Finally, on day five of season, there was a break in the weather. It didn’t snow, but it did get down in the high teens. We knew this would be a special day. We saw more rutting activity and some smaller bucks with does, but we could sense a change. We still had the rest of Wednesday plus Thursday and Friday, and it was only going to get better.

Throughout the five days of hunting plus the one day of scouting, I had taken my son, my daughter, and my wife on some hiking and hunting excursions, and we were thoroughly enjoying God’s creation. Unfortunately, we were seeing way more deer while traveling from one destination to the other. This made it a little more difficult to persuade them and me to “just hike a few more miles” when the movement was slow and everywhere we walked we would find roads/ trails with vehicle tracks on them. Did I say there are a ton of roads? If you have a UTV/ATV, you can go just about anywhere with a few exceptions. We didn’t have one, so we hiked and did a lot of driving. We may never have the opportunity to hunt in this unit again, so we wanted to see as much of it as possible.

I really wanted my entire family to be there when I shot my deer but wasn’t quite sure how that was going to happen. Oftentimes, family members were dropping us off for a hike and then picking us up at another designated spot so as not to have to backtrack to the truck. Also, we were seeing the best bucks along the route 5 corridor, and it was just plain aggravating trying to navigate around the private land, which in places just triangulated into the BLM for no apparent reason. Who was on the planning committee for that? It was predominantly BLM land with small chunks of private land crisscrossing throughout.

With the warmer weather, things were slow, so it was just awesome seeing deer along the corridor, but even trying to find places to stop the vehicle on BLM as we went off on pursuit was frustrating.

Whoever was driving would just have to drop you off in a “safe place.” The weather was changing on our sixth day, which was day five of the season. We had finally figured out what the deer were doing. We had a plan, and we were finished trying to navigate the checkerboard. Although if you are comfortable with the navigational devices and the deer movement is slow in this unit, the steep mountains around the fields are the ticket during this time. I would have been tagged out on day two if by the time we finished skirting around a small portion of private land we would have found “that buck” again. He was a stud and definitely one of those “no brainers.”

Miraculously, on that fifth day of season, it all happened the way I had hoped, just maybe not quite on the buck I was dreaming of. I guess I should have been a little more specific in my prayers. I wanted it to be a family experience, and that is what I got. My daughter and I had made a long hike down from the top and had seen a few does. We had hiked through a great area, and why a buck was not with the does, who knows. Oh yeah, maybe the prayer and us being “all together” had something to do with it. My wife and son came down to pick us up and drove us back up to the top. They were sitting in the front of the truck as they both have eagle eyes and are always picking up animals along the way. While on top, we started walking out and hitting the heads of the draws and glassing. We were starting to pick up a few more animals than usual. Things were looking up, but again, I was thinking we still had two and a half more days and it was just going to get better and better. On one occasion, my wife found some deer way off, so we all made our way to them. Could this be it when we were all together? No. Once again I told them it was not the right buck because I was holding out for the big one.

Then, something happened that none of us were expecting. We were back on our loop along route 3, which was up top, heading around a small curve along a dirt/ gravel road, and low and behold, a buck busted out through the brush and was alone. At first, I was the only one who saw him, and all they heard was me saying, “Big buck,” because they are all big when you first see them, right? I removed my scope covers, bailed out of the truck, and started running. Somewhere along the way, I instinctively loaded a shell in the chamber. I was out a little way but still within vision of everyone in the truck. It was one of those rare places where they could actually see me and also see the buck out in front of me. I put my rifle to my shoulder and looked at him through the scope. They saw me shaking my head no. It was just another buck I was going to pass up, but then something inside my head said no, this was it. I took the safety off, and the rest is history. I took a standing offhand shot with my custom 7 mm WSM built by my uncle, and it went through the heart and destroyed the off shoulder. It was a lethal kill shot. Thank you, God.

This was a large-bodied deer, and therefore, dragging him up the hill was out of the question for me. We were actually able to do something I had never done before, which was bring the ice chest down to him. We (mainly my son) were able to debone the meat and drop it in the ice chest and then carry a heavy ice chest up the hill.

All in all, this was a phenomenal “Hunt-Cation” chock-full of memories, tons of laughter, a few spills and chills, some sheds and dead heads, Bald eagles, a few elk, a lot of mule deer, beautiful country, a little coffee and a lot of love, plus Shooters Grill, and in my opinion, one of God’s greatest gifts, an amazingly spectacular mule deer. All glory to God. Life is grand in His plan. Selah!

Thanks, Huntin Fool, for doing all the research.