Impossible Until It Isn't 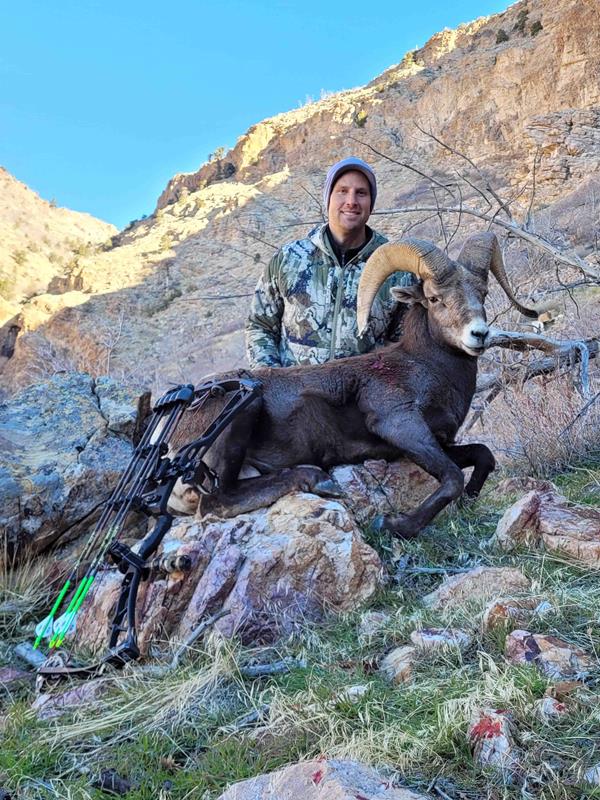 The only tag I found in my pocket in 2021 was an archery- only California bighorn sheep tag in my home state of Utah. I wasn’t complaining! I would only be able to hunt the opening day and then had to work the week of Thanksgiving. I would then have the rest of the hunt off to get it done. My 6-year-old son, Cash, and I were loaded and ready to roll as soon as I got off work Friday night before the hunt opened. My dad had arrived earlier that morning but hadn’t been able to put eyes on any rams. I was a bit worried but confident we could turn something up. More than anything, I wanted my little boy to be a part of it and see his first ram.

Saturday morning, that is exactly what played out. It had snowed a skiff on the top of the peaks and was in the 20s when we woke up. We hammered down some breakfast, loaded our packs, and were on our glassing point as daylight broke. Within a few minutes, my dad uttered those much-anticipated words, “There is a nice ram!”

The ram we had spotted was chasing ewes hard. After about an hour, he worked onto a little shelf and bedded down with his ewes. I grabbed my pack and bow and started my initial ascent into sheep country. Cash and my dad would be spotters and do their best to keep eyes on the ram. I got behind a knife edge ridge and started closing the distance. I got to the predetermined notch in the rock and peeked over. My head barely crept over the rock, and I was immediately picked off by a google-eyed ewe. Game over before it even started. I was pinned down at 110 yards.

As I sat in that rock crack contemplating what I did wrong, I heard commotion above me. Coming over the ridge was a group of ewes with two rams in tow, one being a tank! He was big and ornery, so the name stuck, “Big Ornery.” I would pursue this ram for the next three days. Ewes were constantly blowing up stalks, and the frustration was mounting. Getting an arrow in Big Ornery seemed impossible...until it wasn’t.

My brother-in-law had joined us in camp and decided to head to a glassing point above camp where we had seen a nice ram prior to the hunt. My dad and I headed down the canyon to a spot that we felt needed a closer look. I decided to hike up the trail where I could see the back of the canyon, which was a big, hidden amphitheater. I threw up my binos and almost immediately saw two ewes moving hard in our direction. From behind them and coming out of a hole popped a big, heavy set of horns. We were not sure what ram it was, but we were sure he was a shooter. He had two ewes with him and looked good from every angle. Between us and them was a large cliff face that stuck out east to west. We couldn’t see behind it, but it looked like a shady nook to spend the afternoon. A ewe kept looking west at what we assumed were other sheep. Sure enough, three more ewes and a smaller ram joined them. They eventually fed behind the cliff face and out of sight.

There were two plays, one would be to stay low and work around the base of the cliff. The other option was to go high and work across a rock shelf that would put me above the sheep, looking down on them. I chose to go high. I worked my way up the face into a small chute that would allow me to access the shelf I wanted to be on. We had lost visual on the ram and didn’t know what was beyond the cliff face. I worked across the shelf to where I could peek over into the hole I thought they may be in. I peeked over the lip and spotted two bedded ewes standing as sentinels. No rams in sight. I backed off, trying to decide my next move. I decided to hike higher and get a different angle to locate the big ram. I inched my way up the cliff face to a boulder that would allow me to look directly down in. I snuck up, peeking over, but still no sign of the big ram. I took one more scan below me and noticed a mature ewe get up from her bed and drop down into a cedar-covered shelf. I quickly gazed down the ridge, and there was a lip that would get me as close to that cedar shelf as I could get. I headed down in hopes that the ram was tending that ewe.

I tucked behind the spine of the ridge and started my creep down to the lowest shelf I could get to before dropping off a 50-foot cliff. I was staying tight to the face side of the shelf, peeking around periodically to try to see any sheep before they saw me. On about the third peek around, I saw a ewe! She was looking my direction but didn’t see me. I slowly peeked back around the cliff face and stared straight into the eyes of the big ram. He was frontal and ornery, and I fully expected him to bust. I melted back into the cliff face, nocked an arrow, and got one eyeball above the edge to see. He was still there, staring my way.

With arrow nocked, I peeked out again. The ewe moved over with him. I took one step out onto a rock, and he turned his head and his heavy horns followed suit. I gathered my composure, and slowly got a range on his forehead, right where his bases came together. 65 yards. I could make that shot. I clipped my release to the loop and put tension on the string. I took one more half-step out to ensure I cleared the rock edge. I waited on him to make his move. The ewe flicked her tail and jumped up on a rock behind him. He cocked his head to get a whiff of her. He was now quartered away. This was it! I drew, and he sensed movement. He went to follow the ewe and turned broadside. The 60-yard pin was a little high. I picked a spot, and my arrow was on its way. The shot felt good, but right before the arrow got there it dropped low. It made contact, but not where I wanted. He walked over to the far edge of the cliff and was just standing there. A minute went by, and he was back to chasing the ewe. This was impossible!

I saw two sheep on the far edge of the cliff. One was my ram, and the other was the smaller ram that had joined him. I was wallowing in self-pity as the smaller ram nudged the big one with his horn. Just then, a ewe came out of a crack between the two rams and me. The smaller ram saw her and headed her way. I watched as she made her way back to the 65-yard shelf I had just shot the ram at. The two rams and the ewe were standing at 65 yards. I nocked another arrow. She jumped across a crevice, and I got a range on her. 55. The small ram followed, and the big ram took the same line but knocked the smaller ram into a hole. The ewe dropped into a crack and popped up closer. I ranged again at 40. I took a quick glance at the line the ewe was on. If she continued, she was going to drop out of sight behind my side of the cliff edge at 30 yards. She continued followed by the big boy and Junior as caboose. The ewe dropped in, Big Ornery dropped in, and then Junior dropped out of sight. I made my move.

I scrambled 10 yards up my side of the cliff edge. They must be right in front of me 15 yards, maybe 20. I got to a rectangular rock about half the size of a refrigerator and peeked one eye around the right side. Ewe at 15 yards. I peeked around the left side and saw Junior. Just then, I caught movement in my peripheral to my right. I turned to see big, heavy bases appearing out of the crack to my right at 12ish yards. I went into autopilot – draw, anchor, peep. He was straight away from me. He turned and quartered away at 17. Pin behind last rib, that would work. The arrow was on its way. This was impossible, until it wasn’t. The arrow hit its mark, and blood immediately appeared at impact. All the frustration, all the anxiety, all the raw emotion erupted out of me as he went on his death run.

My dad and brother-in-law had no idea what was going on. They figured the stalk was over until they heard the canyon erupt with “Yahhhhhhhhhhhh! Wahoooooooo!” I got on the radio and confirmed I was certain I had killed him, and the whooping and hollering echoed off the canyon walls of the amphitheater. I didn’t plan that. I’m reserved, calm, keep my emotions under wrap. Not that morning, not in that moment. It was just raw emotion I couldn’t contain. To kill a big ram with my bow was impossible...until it wasn’t!