Down to the Last Minute 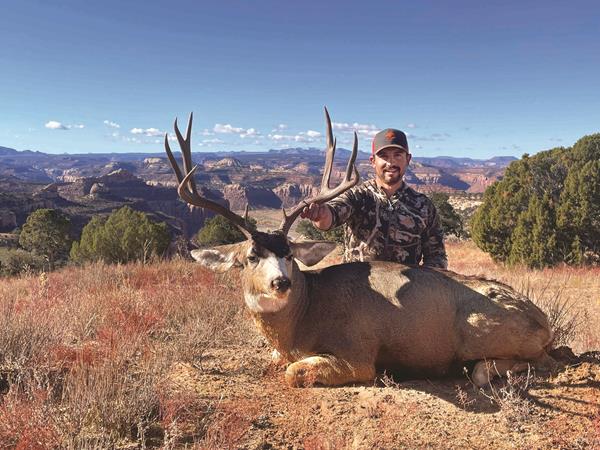 With each passing year, we gain more and more options thanks to Huntin’ Fool. Going into the 2021 draw, we knew we had more than enough points to draw a Utah general deer tag. We scratched the season on the calendar and started planning, spending hours and days poring over Google Maps and onX. We had several spots in mind when we found out we officially drew the tag.

October came and we took off for Utah from Texas a few days before season to hopefully find a few bucks for opening day and to beat the orange army to any mature bucks. It was the first time for both of us being in the state, and it was a good thing we left early. Deer were not at the locations we had hoped, and we ended up needing every minute to tag out. We moved camp five times before we found an area with a good amount of deer and the caliber of bucks we had hoped for. With three days left to hunt, we had near whiteout conditions. Instead of sitting at camp or in the truck, we took off on foot, eventually cutting tracks in the snow over two miles to a roadless area that had deer behind almost every tree.

The next day, we were sitting right where we had left off the day before. Right at legal light, I glassed a good buck that went into a patch of junipers. An hour later, the buck was making his way out but in the worst possible area he could have gone. We had two choices, a long shot or he disappeared with little hope of seeing him again with the terrain he was headed for. Brad ranged him while I dry fired on him several times from the prone position. “772 yards!” he called out. The .300 WSM with a hand-cooked Berger was doped to range. Brad was behind me on the spotter. I told him, “Here we go.”

The first shot was called. Elevation was good. Hold 2 MOA right. Quickly following up, I made the correction and sent it. “You dumped him!” Brad yelled. “He’s down!” We had the buck taken care of and were back hunting for buck number two by 1 p.m. That evening, we saw a very nice 4x4 at last light, but was it too late to make a play.

On the last morning, we found ourselves right back where I had killed my buck, glassing over big country. We blew a stalk on a nice buck that somehow slipped out the back door. Midday, we gathered our thoughts and Brad said every evening these deer were filtering out to one specific sage flat. “I’m going all in and sitting right on the field. If he comes out, it’ll be a layup.”

I doubted the plan, but having hunted with Brad for over 20 years, I trusted his gut feeling. Deer slowly started coming out to the sage. With 30 minutes left, there were three small bucks and several does out feeding. With every passing minute, I was getting more anxious. Five minutes left of legal light, and Brad spotted the 4x4 buck coming out of the junipers 150 yards away. As many times as I’ve heard his 7 mag sound off, that was by far the sweetest. He made a perfect shot, dropping the buck where he stood.

While we took it down to the last few minutes, our first time to Utah was a success. Needless to say, we won’t wait so long before heading back on a general tag. Big thanks to Robert Hanneman for a few last-minute tips that undoubtedly contributed to our success.